Over and over during the day-and-a-half celebration the words were shouted by the faithful, primarily people with roots to Mexico.

“For many Mexican Americans this might be the only day they come to church all year,” said Fr. Ed Kilianski, SCJ, pastor of OLG, Houston. “But they always come.”

That’s not to say that it is just those who call themselves Catholic in name only who fill the pews of the nine liturgies during the two-day celebration. It takes six Masses each weekend to make room for all of the regular church-goers. The parish school has a waiting list to attend. Among its students are descendents from the parish’s first members, refugees from the 1910 Mexican Revolution, who continue to be active in the church of their ancestors.

“Our regular parishioners are here, of course,” said another SCJ. “But the participation of so many people, people who might not go to church on Christmas or Easter… it shows the significance of the day.”

This year the celebration started quietly with a 5 p.m. Mass on the eve of the feast. Attendance was small; music was limited.

And then the calm ended. At 7:30 p.m. the church was filled beyond its limits for the second Mass. Two hours later even more people tried to find their way inside. Members of the Knights of Columbus stood by the doors, stopping people from entering when there literally wasn’t room for another person. One person stepped out of church before the 9:30 Mass ended. In her place, one person –– no more –– was allowed to squeeze in and take her place.

Outside, drums accompanied dancers and others dressed in costume. The outfit themes can be traced to Aztec and other early Latin American cultures. Booths were set up selling everything from Christmas decorations to religious goods. Across the street, private vendors sold pictures of Our Lady of Guadalupe in a variety of sizes. May of them found their way inside the church so that they could be blessed. For the children there were toys and candy.

The church hall was filled with visitors buying Mexican food made by parishioners. “Our sales during the feast generally bring in $10,000 to the parish,” said Fr. Ed.

The highpoint of the celebration is midnight Mass at a makeshift altar in the plaza. Visible behind the altar is a shrine to Our Lady of Guadalupe. By this time the patroness of the Americas is drowning in flowers. It is another tradition of the celebration: bringing flowers, generally roses, to Our Lady. It echoes back to the roses that Juan Diego carried in his tilma at the Virgin’s request. According to the story, the Virgin of Guadalupe directed Juan Diego to collect roses growing on a desolate hilltop, wrap them in his tilma and take them to the bishop. When Diego delivered the roses, the bishop and other witnesses were astounded to find the image of the Virgin of Guadalupe imprinted on Diego’s cloak. It is this miracle that sparked the devotion to Our Lady of Guadalupe.

By the time of the last feast-day Mass the flowers seem to occupy just about every inch of space in the church not already held by one of the faithful.

Hundreds, sometimes thousands of worshippers, squeezed together for the liturgies. People of every age from the newly born to those well into their 90s. Tightly packed crowds are often tinder for short tempers but at Our Lady of Guadalupe there was a sense of togetherness, a sense of joy mixed with deep devotion.

At midnight Mass there was room for only the most minimal of movement once the faithful crowded, standing room only, in front of the altar. Even raising an arm to get a camera in the air to take a photo required a serpentine route through an intricate maze of arms, shoulders and heads. But many made the effort; often it looked like a rock concert with dozens of phones in the air, digitally capturing a memory of the event.

A few hours later, some of the same people who were at the midnight celebration were back again, packing the church at 5 a.m. for Las Mañanitas, an hour of songs of praise to Our Lady. This was followed by Mass at 6 a.m. to another capacity crowd. Three hours later there was a children’s liturgy for OLG students. In place of the homily, students acted out the story of Juan Diego.

The noon Mass wasn’t quite as crowded; there was almost enough room for everyone to sit. However, by the final Mass at 7 p.m. worshippers overflowed the church from the front and side doors. Many stood on the sidewalk for the entire liturgy, unable to find a spot inside.

And then, the crowds slowly faded. The vendors packed up. The dancers went home. The parish family –– including its pastoral staff –– took a needed break before preparing for the everyday busyness of the active parish.

After the feast, Our Lady of Guadalupe parish calms, but never stands still for long. 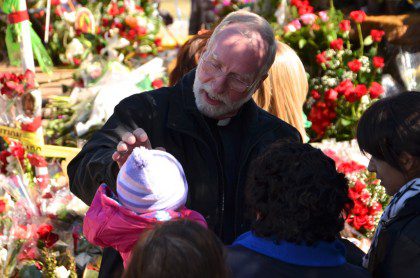 For over 100 years, Our Lady of Guadalupe parish in Houston has been a “home base” for Hispanic Catholics in the city.

Founded in 1912, OLG was established to serve Mexican immigrants fleeing their country in the wake of the Mexican Revolution. Built with a grant from the Catholic Church Extension Society, worship space was on the second floor of a small frame building. Below was what was to become the first Catholic school in Houston. First Mass was celebrated on August 18, 1912.

Until 1921, OLG was a mission of Immaculate Conception parish. Both the parish and mission were served by the Oblate Fathers of Mary Immaculate. The Sisters of Divine Providence operated the school.

The Priests of the Sacred Heart took responsibility for the parish in 1973. Currently, Fr. Ed Kilianski, SCJ, is pastor. Fr. Zbigniew Morawiec, SCJ, is associate.

The parish serves more than 3,500 families from across the Houston area along with many more unregistered families. As noted earlier, the parish school continues to operate at capacity.

Our Lady of Guadalupe is still thought of as a “mother church” to Houston Hispanics, including newly arriving immigrants as well as the fourth and fifth generation of OLG’s first parishioners.

“This is truly a full, vibrant community. For generations, families have worshiped, celebrated baptisms and weddings, said goodbye to loved ones and much more here,” said Fr. Ed.

“We are a national parish, there are no boundaries” he continued. “People come from all over because of the tie in with their ancestors, because of their Mexican culture… We have families that have been here since the beginning. They are still involved in every level of our community.”

In 1991 a State Historical Marker was dedicated outside the church, attesting to the role the parish has played in the development of the Mexican American community in Houston. It notes that the spirit of the community has always been one of welcoming.

There is really no need to put the motto in writing. The spirit of “Our home is your home” is obvious.

For the past year the parish has been celebrating its 100th anniversary with a special event each month. In August, exactly 100 years after the first Mass was held on the property, Daniel Cardinal DiNardo was the main celebrant at an anniversary Mass.

And now that the clean-up is done from this year’s feast-day celebrations, the parish looks forward to its next 100 years.