To have a “Priestly Heart”

Archbishop Christophe Pierre, Apostolic Nuncio to the United States, was the main presenter at the Dehon Lecture November 8th at Sacred Heart Seminary and School of Theology. His topic: “The Heart of the Priest.”

“As the Apostolic Nuncio, the Holy Father’s personal representative in this country, I wish to assure you of his spiritual closeness and affection for each of you,” he began. “We know that the recent Popes have spoken of the need for a New Evangelization. This requires a profound reconsideration of how we communicate the Christian experience; this is the core of the new missionary spirit that must take hold of the Church.”

He continued, noting that “Today, the Church needs joyful, missionary disciples – heralds of the Good News, formed after the Sacred Heart of Jesus. This was also the desire of the Venerable Leo John Dehon, the founder of the Priests of the Sacred Heart. It might seem strange to think of priests as disciples rather than as leaders, but the new Ratio Fundamentalis, issued in December 2016, emphasizes just that: It is particularly necessary for the priests today to understand themselves as missionary disciples.”

The Ratio Fundamentalis is a document that outlines the formation of Catholic priests. “This integrated formation prepares the seminarian and priest to make a gift of himself to the Church – to go out of himself, to not be self-referential but to look to the essential needs of the flock,” said the archbishop. “Indeed, the Holy Father wishes priests not to be managers or mere functionaries of the sacred, but rather to be priests with inclusive and compassionate hearts, who show forth the tenderness of God.”

What does it mean to have a “priestly heart, configured to the heart of Christ?” Archbishop Pierre referred to the homilies given by the pope on the Solemnity of the Sacred Heart of Jesus each year. In 2013, he said, Pope Francis focused on two dimensions of love. “First, love is expressed more clearly in actions than in words, and second, there is greater love in giving than in receiving,” he said.

In his 2014 homily Pope Francis emphasized the need to have a steadfast and humble heart. “The emerging image of the priestly heart configured to the heart of Christ is one of fidelity, humility, closeness, and gentleness,” he said. “This love binds us but it binds in freedom; it binds while leaving you the space to respond with love.”

Archbishop Pierre said that Pope Francis invites priests to contemplate the Heart of Christ. In his  2016 homily for the feast of the Sacred Heart the pope said that “Contemplating the Heart of Christ, we are faced with the fundamental question of our priestly life: Where is my heart directed? It is a question we need to keep asking, daily, weekly… Our ministry is often full of plans, projects and activities: from catechesis to liturgy, to works of charity, to pastoral and administrative commitments. Amid all these, we must still ask ourselves: What is my heart set on?”

He continued, saying that “The Holy Father expects priests to have a courageous heart that engages the real problems of men and women; this requires being close to the Lord and the people… Today, there are many who do not know Christ or who have left the Church; they are ‘homeless’. The Pope wants a Church that goes forth to meet them.”

The archbishop concluded by stating that “Today, the Church needs priests to be engaged in the new evangelization, using ‘new ardor, new methods, and new expressions’ (Pope John Paul II)… The increasing secuarlization of American society and the growing number of unchurched people are making this country and culture ‘missionary territory’ once again…

“The Church needs priests who are close not only to the people but to the Lord. Like the beloved disciple, we too must contemplate again and again the riches of the Heart of Christ, giving the mercy and love of God primacy in our hearts. This is the Church’s expectation for its clergy today. The task is daunting, but it is not impossible. Saint John Vianney is reported to have said, ‘the priesthood is the love of the Heart of Jesus.’ This is certainly true, and His love will never abandon you.”

After spending a full day with the SHSST community, including being the main celebrant at the Mass for the Rite of Admission to Candidacy for Holy Orders, the archbishop returned to the airport the next day to fly to his next engagement. Fr. Tom Knoebel, SHSST president-rector, was his chauffeur.

In the car, Fr. Tom said that the archbishop “commented at length about how pleased he was with his visit. He was impressed by the spirit of the seminary, pointing out in particular how impressed he was with the way everyone – faculty, staff, seminarians as well as administration –  pitched in to help make the day a success. He mentioned that in many other places he visits, this is not the case. People there often do not care what other people in the seminary are doing, and I was happy to say that has never been the case here at Sacred Heart. We all care deeply about the mission and success of the school.

“The Nuncio also mentioned how impressed he was with the faculty. He saw that all of the faculty were engaged in the topic, no matter what their field of specialization, actively seeking to learn more about the subject matter, invested in the Ratio, in the kind of priests God is calling and how He is forming us all for ministry. He mentioned how greatly they care about preparing good priestly ministers for God’s Church.

“He left Sacred Heart, having observed us for the first time, full of admiration and respect for all of us.”

Click here to read the archbishop’s homily at the evening Mass. 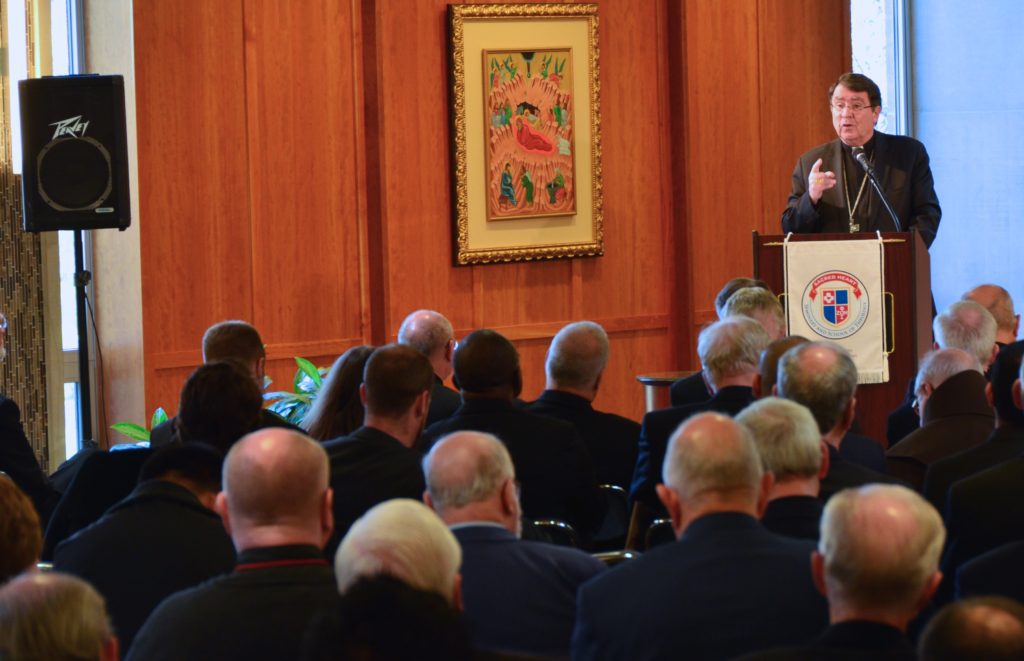 « Previous: On All Souls Day we remember… Next: Congratulations Fr. Vien! »