Always in service to others

Just weeks after celebrating his 95th birthday, Br. Gabriel Kersting died on March 7. In hospice care near the Sacred Heart Community in Pinellas Park, he was surrounded by fellow SCJs at the time of his death.

Originally from Pittsburgh, Pa., Br. Gabe worked in the Merchant Marines as a deckhand before following his religious vocation. He made his first profession when he was 26 and spent much of his religious life as a support person to others, serving at the novitiate and in province seminaries, and for 14 years as secretary to the provincial superior.

A memorial service was held for Br. Gabe with the community in Pinellas Park last night. The Mass of Christian Burial will be tomorrow, April 11, at Sacred Heart at Monastery Lake at 10:30 a.m. There will be a viewing from 9:30 a.m. until the time of the Mass. Interment will follow at the province mausoleum; a luncheon will be held in the community dining room at SHML.

“I don’t have anything but I have EVERYTHING!

Upon learning of Br. Gabe Kersting’s death Frater Juan Carlos Castañeda Rojas wrote a reflection on what Br. Gabe had taught him as a novice, and how that lesson is becoming even clearer to him now during his year of ministry in Brazil.

Br. Gabe’s words “became tattooed on my heart,” wrote Frater Juancho. He told the novices that as a member of the Priests of the Sacred Heart, “I don’t have anything, but I have everything.”

“He explained to us that this meant that he did not have any money, property, or valuable material things but that at the same time he had never missed those things because he had everything he needed thanks to the congregation…

“Today as my pastoral year continues in Brazil and I have been able to see the difficult life situations of many poor people here, those words have become even stronger in my life as a foundation of growth in my vocation.”

Fr. Greg Murray of the Canadian Region conducted his first parish mission March 25 to 29; he gave it at Good Shepherd Parish in the Archdiocese of Ottawa.

With a feast of Mary on March 25, he built the mission around the three members of the Holy Family.

“Having done one now, it gives me incentive and courage to look for further missions in other parishes,” said Fr. Greg. “Missions allow one much more opportunity to build on a spiritual theme than the ten-minute Sunday homily.”

“Sponsorship allows me to approach almsgiving with a grateful attitude”

In the most recent Dehonian Spirituality mailing Karen Mahoney, a parishioner of Resurrection parish in Ottawa and a member of the North American Migration Committee, wrote about her parish’s experience of sponsoring Syrian refugees.

“About eight years ago our parish was approached by the archdiocese to sponsor a refugee family.  In Canada, this means being financially responsible for a family for one year and helping them with settlement activities.  At the time, our parish council had several items on its agenda… There were several excuses as to why we could not entertain the possibility of sponsoring a refugee family; it cost too much money, there are not enough volunteers, we haven’t done this and we are not sure what we are getting ourselves into, and this is going to be a lot of work.

“I was frustrated!  I felt like our church was too focused inward on our own selves and not outward on those in need.”

However, through Karen’s work, the parish eventually sponsored four refugee families and was greatly enriched by the experience. “Sponsorship formed a ministry that allowed us to engage in our faith in a range of practical ways.  Some parishioners gave financially or donated goods no longer needed.  Others have taken an active role in the lives of the families assisting with things we take for granted; navigating enrollment in government services, finding a doctor or other health care providers, language tutoring, helping them find jobs or buy their first car…

“Sponsorship allows me to approach almsgiving with a grateful attitude… It has given me the strength to make changes in small ways and not be overwhelmed with the large scale problems in this world.  I am grateful that my heart was opened to the face of God.”

As noted previously, during the Easter Season the Dehonian Associates Office will be sending by email “The Way of Light, Reflections on the Resurrection by Leo John Dehon, SCJ.”

Everyone who currently receives the Friday Dehonian Spirituality e-mail publication (most SCJs in North America are on this list) will automatically receive “The Way of Light.”

The Provincialate Offices will close at 2 p.m. on Thursday, April 13 and not reopen until Tuesday, April 18 for the commemoration of Triduum and Easter. There will be no Dehonian Spirituality mailing on April 14 and no Fridge Notes the week of April 17.

The next issue of Fridge Notes will be published on Monday, April 24. Click here to send news items for Fridge Notes.

Fr. Ed Kilianski is in Texas for a visitation. He will spend Holy Week and Easter with the Houston community and return to Hales Corners on April 17. April 19-21 he will be in South Dakota for a C-POSH board meeting. The meeting of North American administrations runs April 24 (evening) through April 25. The Provincial Council meets on Wednesday, April 26.

Frater Joseph Vu is pictured in the woodshop on the grounds of St. Francis Residence (Woods Road) in Franklin, Wis., building shelves for the new novitiate house. 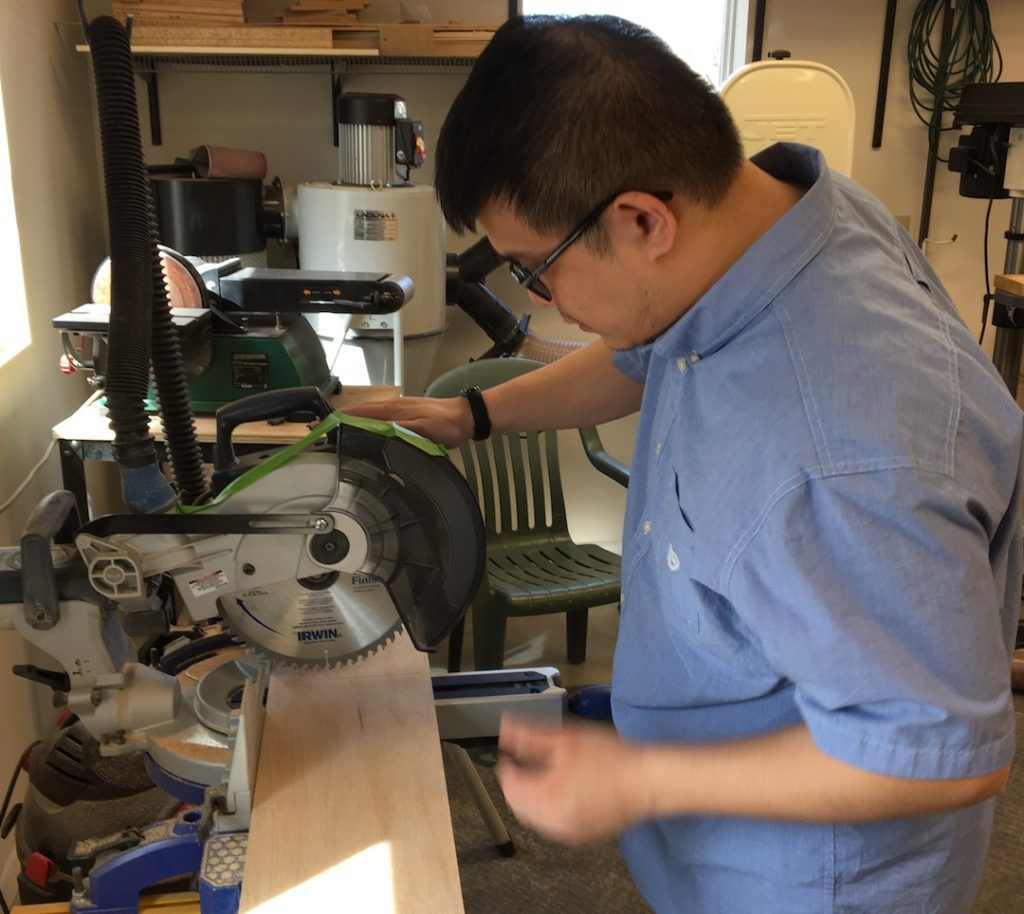