The Passion of his Heart

“The Passion is the masterpiece of the love of the Heart of Jesus. His agony is particularly the Passion of his Heart.”

Leo John Dehon, SCJ, The Life of Love towards the Sacred Heart of Jesus, 7th Meditation

The Provincial Offices will close at 2:00 pm on Holy Thursday, April 14, and remain closed until Tuesday, April 19. There will be no Fridge Notes published on Easter Monday, April 18. The next edition will be on April 25. Have a blessed Triduum and Easter!

Preparing for a Dehonian future

April 5-6 the Provincial Council met in Chamberlain, SD, for a planning retreat. Three pillars of focus were identified: Spirituality, Community, and Mission and Ministry. Familiar topics, they have been repeatedly raised by members of the US Province as priorities, most recently at the January 2022 Province Election Assembly.

Reflection on each began by identifying its characteristics, starting with: “If someone was observing you as a community, in the area of spirituality, what two things would they see?” The community’s focus on oblation, the idea of serving the Church through the offering of oneself and the community, was noted. Words such as “welcome of the spirit,” “life-giving,” “regenerative,” “Eucharist-based,” “hospitality,” and “reparation,” were identified.

The council talked about how to better share Dehonian spirituality and how to ensure that the core values of the Priests of the Sacred Heart continue to be lived through its ministries, regardless if they are staffed by an SCJ or by a lay colleague.

Following their planning retreat, the council had a short business meeting during which they appointed Fr. Rafael Querobin, SCJ, as local superior of the Houston community and Fr. Jerzy (George) Mordalski, SCJ, as local treasurer. The council also voted to present Fr. Rafael to Cardinal DiNardo of Galveston-Houston as pastor of Our Lady of Guadalupe, Houston.

+Barbara Koebel, 92, the sister of Fr. Tom Cassidy, SCJ, died April 5. Funeral arrangements will be on Monday, April 18, at Holy Trinity Catholic Church in Newburg, WI (521 Congress Dr., 53060). Visitation will be from 10:30 a.m. until the start of Mass at noon. Following the Mass there will be a procession to Resurrection Cemetery (9400 West Donges Bay Road, Mequon, WU 53092). Those attending are welcome to visit after with food and beverages at The Orville restaurant in West Bend (518 Poplar St., 53095).

+ Alice Sutton, the mother-in-law of John Kuxhause (province accountant), died April 5. She was in her 90s.

Last week Fr. Ed Kilianski, SCJ, spent several days at Froedtert’s Center for Advanced Care to address the damage he suffered to his left hand during chemotherapy treatments. He was released over the weekend, but is scheduled to return later this week for surgery that will involve three surgeons: vascular, orthopedic and plastic. He is meeting with his medical team today to finalize details. 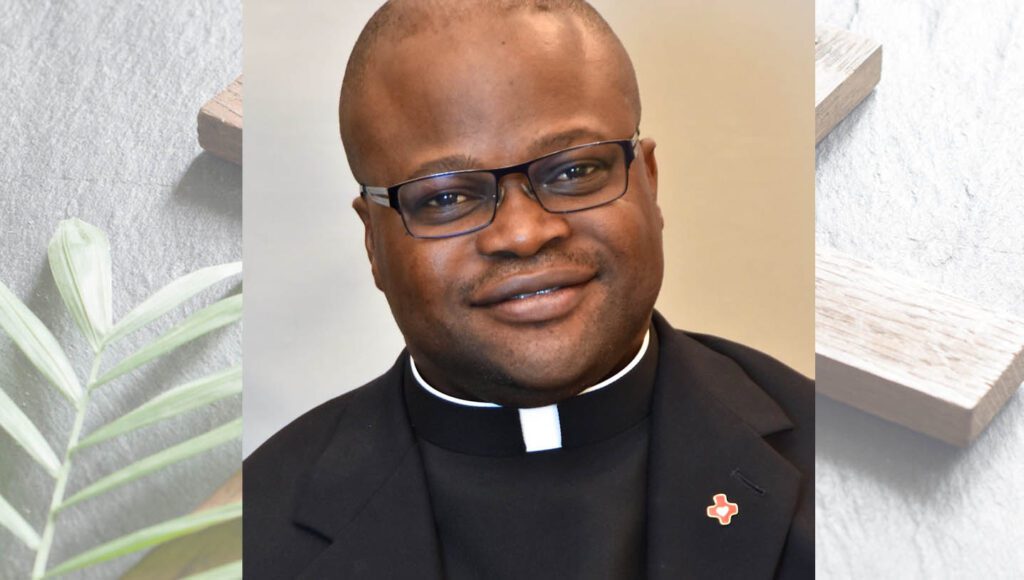 It is up to us

“Today we celebrate Palm Sunday, also called the Sunday of the Passion of Our Lord,” wrote Fr. Gustave Lulendo N’dotony, SCJ, in yesterday’s Dehonian reflection for Lent. “Through his Passion of love, Jesus was faithful unto death, faithful to his infinite love for the Father, faithful to his infinite love for people. Through his freely accepted Passion, Jesus comes to break the dynamism of death, the dynamism of sin. It is sin that leads the scribes and Pharisees to hatred; sin which leads Pilate and the crowd to fear; sin which leads the disciples to sleep and flight; sin that leads Peter to denial.

“It is up to us, where we are, to do the little bit that depends on us, to continue what Christ began and allow it to bear fruit in life.”

Fr. Gustave is the superior of the Dehonians’ Canadian Region. Click here to read his full reflection.

During his visit to South Africa, Fr. Charles Brown, SCJ, had the opportunity to visit with Fr. John Strittmatter, SCJ. Originally from the United States, Fr. John served in several parishes in the De Aar Diocese. He was also very active in social development and ministry to the poor. Fr. John retired in 2012 and is a member of the SCJ community in Aliwal North. 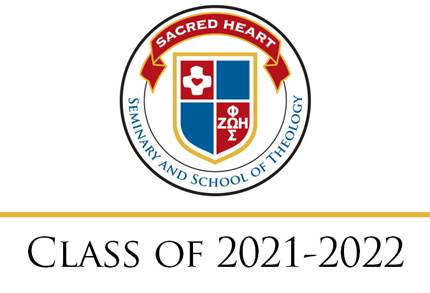 The community at Sacred Heart Seminary and School of Theology invites anyone to join them VIRTUALLY at its May 6 Commencement Ceremony. It will take place during Solemn Vespers in the Sacred Heart Chapel. Among the graduates will be Frater Henry Nguyen, SCJ (the next day, Frater Henry will be ordained to the diaconate).

Due to pandemic safety protocols, in-person attendance is limited. Click here to watch the livestream, which will begin at 4:30 pm (central). 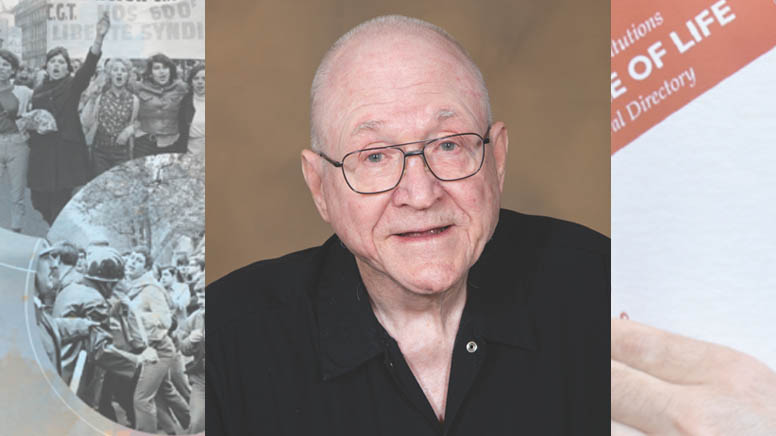 Most contentious chapter in SCJ history?

“Although I am not a historian and only marginally familiar with SCJ history, my view is that the XVI General Chapter in 1973 was one of the most contentious chapters in the history of the Congregation of the Priests of the Sacred Heart of Jesus,” wrote Fr. Bernie Rosinski, SCJ, in his reflection published on the General website. His is one of several reflections on the development of the current Rule of Life.

“In saying this, I have in mind as well that other famous chapter in the early years of the Institute when a small group attempted to remove Fr. Leo Dehon from his leadership position as superior general. Forgive me for my speculative judgment.

“The XVI General Chapter took place in Rome between May 23 and July 7, 1973, nearly 50 years ago. Its chief function was to elect a Superior General; another important function was to comply with the Decree on the Adaptation and Renewal of Religious Life of Vatican Council II: “Therefore let constitutions, directories, custom books, books of prayers and ceremonies and such like be suitably re-edited and, obsolete laws being suppressed, be adapted to the  decrees of this sacred synod.” Perfectae Caritatis (3).

“Current in the world at that same time were the voiced and unvoiced expectations of what the Vatican Council II, which concluded in 1965, would accomplish through its deliberations. Expectations were so wildly divergent as people waited for the Holy See to ‘flesh out’ how the various decrees were to be implemented. People often spoke about ‘the spirit of Vatican II’ without ever specifying what the term meant (e.g., rumors of a married priesthood, intercommunion among religions, etc.). Oftentimes such outlooks were fed by a secular press and by social organisms with vested interests…

“We survived this chapter only by the grace of God and because the Church had need of the charism of Fr. Leo John Dehon. And if an SCJ could survive this event, he could survive anything.” 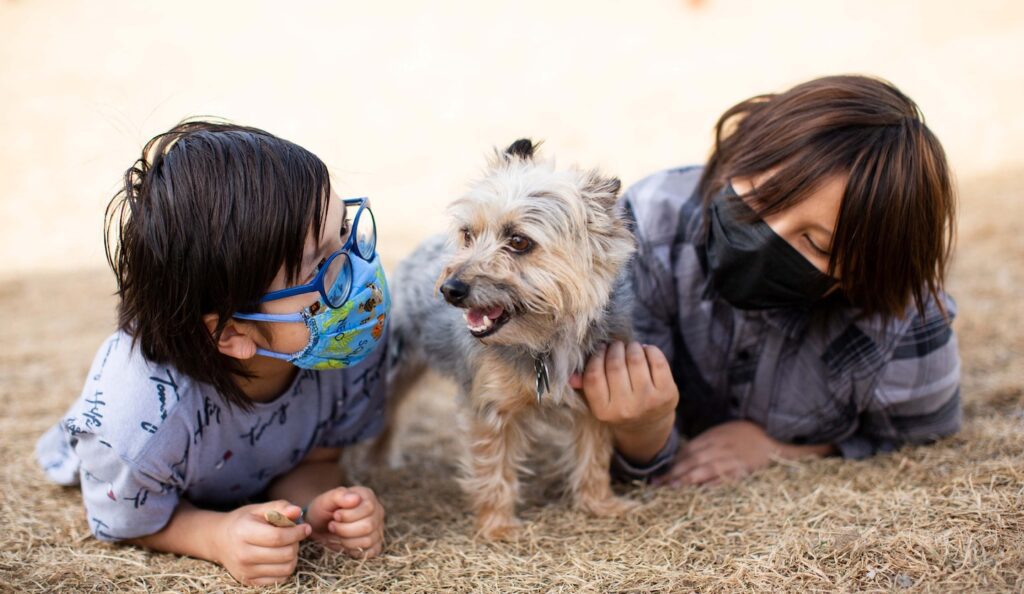 In 2017, St. Joseph’s Indian School launched HAPI Homes (Houseparents and Pets in Homes). Currently, ten dogs are in the program, and four more are slated to complete training and certification this week.

Dogs have long held a prominent place in Lakota culture, pulling sleds, helping to “herd” children while parents were busy, and acting as camp sentinels.

The role of the HAPI Home dog is focused on companionship and the benefits it provides to the students. Research has shown that the emotional support of a loving pet enhances psychological growth, improves social skills, boosts self-esteem and reduces anxiety – all factors that increase overall academic achievement. Students also benefit from learning to groom and care for the dogs.

Maija Davlouros, who coordinates HAPI, spoke of positive outcomes she has witnessed first-hand – the reserved child brought out of her shell by the social presence of a dog in the home, the frightened boy who slept more readily after “Sarge” cased his bedroom and found it safe, the high school girl who found a listening canine ear after a tough day at school.

Dogs undergo Canine Good Citizen testing by a certified dog trainer and houseparents must show that their pet’s shot record is up-to-date. Canine companions are welcome throughout the campus, with the exception of the Health Center, Dining Hall, Rec Center and Development Offices.

How many cooks in the kitchen? 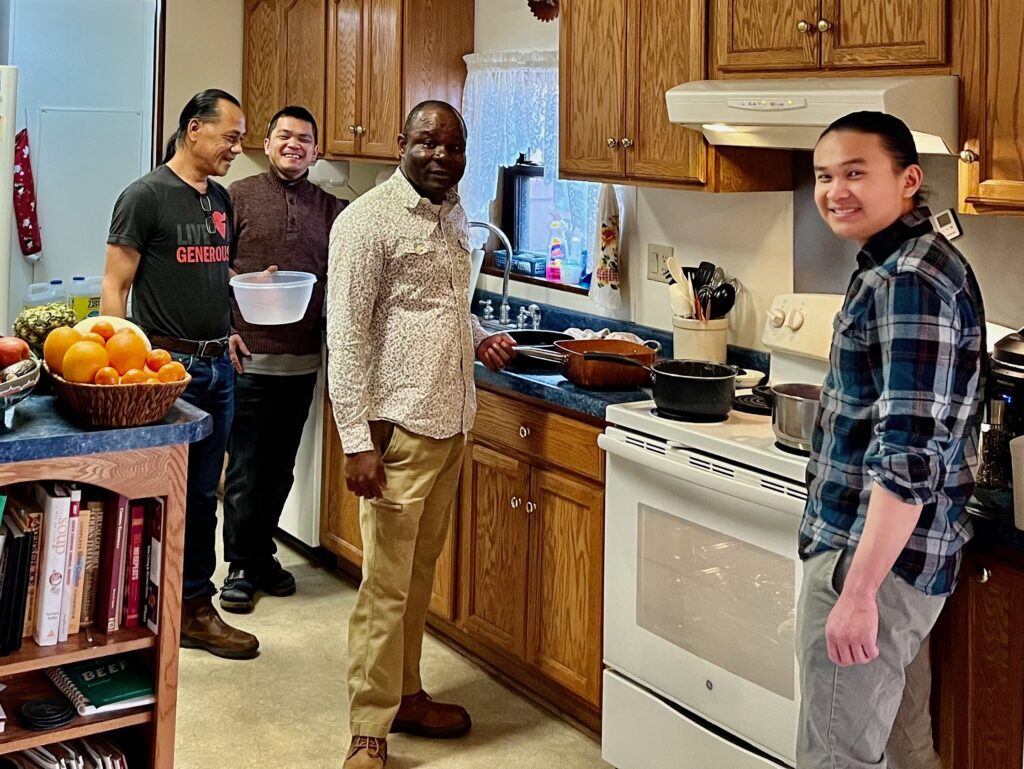