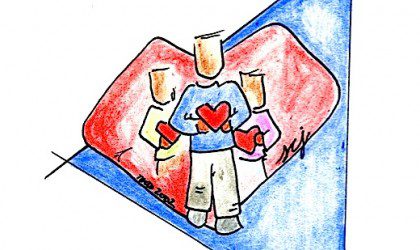 At the 2014 Dehonian Family Conference in Rome participants were presented with the “Spiritual Path,” a formative guide for introducing lay people to the Dehonian charism. David Schimmel, director of Dehonian Associates for the US Province, adapted the guide for use in the United States.

Fr. Richard MacDonald heard about the program and decided to see if there might be interest in it among people in the Diocese of Brownsville. The SCJs served in the diocese for 42 years “and I was graced to be present for much of that time,” said Fr. Mac, who continues to live and minister in the area.

“On Tuesday I spoke to nearly 50 people in Raymondville, and on Friday almost the same number in Lyford,” he said. “I am scheduled on May 5 and 8 to give a second session. I think it went very well.  There was a lot of enthusiasm to continue and the people thought that others would join us in May. I am more than encouraged.”

Fr. Mac said that it was Bishop Virginio Bressanelli, when he was superior general, who inspired him to share the Dehonian charism.

“I heard him speak about how we, as professed SCJs, should share the gift of Fr. Leo John Dehon,” said Fr. Mac. “His letter ‘We the Congregation’ reinforced that in me.”

“These first meetings are an introduction,” he continued. “I spoke about the Sacred Heart, focusing on the person of Jesus, his humanity and divinity and why the Church has taken the Heart of Jesus as a great image and symbol of His unconditional love for our redemption and forgiveness. I talked about Fr. Dehon and told the people about how these talks are part of the effort of the SCJs to share his charism with the laity and deepen their love for the Sacred Heart in carrying out their mission in the Church.

“The people were very pleased to hear that I would continue the talks and some asked what the Dehonian Associates might look like for them.”

Dn. David Nagel, province treasurer, informs SCJs that as of April 1 there is an amendment to the SCJ Medical Plan for those under 65 years of age who are not on Medicare.  The total number of days paid at 100% for retail pharmacy prescriptions is 90.  This includes insulin and diabetic supplies, and is for the amount normally prescribed by a physician but not to exceed a 90 day supply. “The change was put into place so you can now have 90 days filled either by mail through Caremark or through your local pharmacy,” said Dn. David.

Questions? Contact Dn. David by phone or email at the Provincial Offices.

Fr. Johnny Klingler expresses his thanks to SCJs for their prayers and concern following the death of his brother-in-law, Larry Mayo.

Judaism in a Dehonian seminary

Dr. Sherry H. Blumberg has taught elective courses in Judaica for the past ten years at Sacred Heart Seminary and School of Theology. In the April 10 issue of Dehonian Spirituality she wrote a reflection on her work, as a Jewish scholar, in a Dehonian seminary:

“I began teaching at Sacred Heart Seminary and School of Theology in 2004… In the ten years that I have been teaching here, I have been impressed by the students and my fellow faculty members. I have met people who genuinely want to live by their values and who spend time in both outer actions of living a just and loving life, and an inner spirituality that involves meditation upon the faith they seek to teach and bring to those they serve…

“Yet, the question of where I fit is always with me. The tenets of Dehonian Spirituality that I identify with are 1) the outreach to all other living human beings because of the love of all God’s creations, and 2) the importance of the interior life. That I am Other in my Jewishness is only troubling when someone says ‘one in Christ’ and so I must translate Christ as God before I say Amen…

“I believe that a teacher is also always ‘other…’ As ‘other,’ my task at SHSST is to be as open as possible about my Jewishness… I model for the students my interior life as well as my love of all human beings. If my teaching can help future priests and Catholic lay leaders understand that while our traditions differ, our faith in God is common to both religions, then I have added a small level of respect to the student and hopefully to the world.”

Click here to read her full text as well as other reflections and prayers in last week’s Dehonian Spirituality.

Bishop Zolile Mpambani of Kokstad, South Africa, has been named as one of the participants at the October 4-25 Synod of Bishops. The theme of the synod: “The vocation and mission of the family in the Church and in the contemporary world.”

Bishop Zolile, an SCJ from South Africa, is a former general councilor. Many SCJs in North America may remember him from when he spent time in the US and Canada on sabbatical following his term in general administration.

Fr. Stephen Huffstetter begins the week in Ottawa for the North American councils meeting. From there he goes to Mississippi for a visitation and board meeting.