On April 6, Pope Francis appointed Fr. Heiner Wilmer, superior general, as the new bishop of the Diocese of Hildesheim (Germany). The Diocese of Hildesheim, which includes the city of Hanover, is one of the oldest dioceses in the world. It was founded in 815 and is located in northern Germany; it is over 18,5000 square miles and includes approximately 610,000 Catholics and 200 priests. Fr Wilmer succeeds Bishop Norbert Trelle, who headed the diocese from 2006 until 2017.

Fr. Heiner was provincial superior of the German Province when he was elected superior general in 2015. He was born on April 9, 1961 in Schapen, Germany, was ordained in 1987, and professed his first vows with the congregation in 1982.

Prior to his service as provincial superior Fr. Heiner held a number of positions in education. Fr. Heiner is also an author with several published works.

Father Carlos Enrique Caamaño Martin, until now vicar general, assumes the office of superior general until the election of a new general government. Details of the election process will be shared in the weeks ahead.

The Province Vocation Office collaborated with the formation community during the past few days to host a Come and See Weekend for potential candidates. Fr. Byron Haaland, novice master, led a First Friday reflection for the group, and on Saturday, Frater Juan Carlos Castañeda Rojas received the ministry of acolyte. Fr. Ed Kilianski was the main celebrant of Saturday’s Mass in which Frater Juancho received the ministry.

Frater Juan Carlos Castañeda Rojas extends his thanks for everyone who has kept him and his family in prayer while his mother has been hospitalized. Frater Juancho reports that his mother is doing better but is still in the hospital while a variety of symptoms continue to be addressed.

Benefactors reflect on visit to Asia

Last year two benefactors, Bob and Mary Van Poppelen, traveled with Fr. Dominic Peluse and Pam Milczarski to India and Vietnam to see first-hand the needs of the Dehonian missions there. Recently, the Province Development Office did a video interview in which the couple talked about their experiences in Asia. Click here or on the image above to view it.

Both the Ottawa and Toronto communities welcomed international SCJs during the past few weeks.

In Ottawa, two SCJ candidates from Vietnam – Canh Xuan Tran and Phi Van Phan  ­­– arrived on March 28 to begin a two-month ESL session at St. Patrick’s Adult School.  They are first-year philosophy students at a Jesuit College in Ho Chi Minh City. Both are from the same village in South Vietnam, and for each, this is their first trip outside of the country. “It is a real pleasure to have them with us and to be able to help them in acquiring a better grasp of English,” said Fr. John van den Hengel, regional superior. They will remain with the community until May 28.

As noted previously, the Toronto community welcomed Fr. Antonio Maria Resende Pereira from the Brazil – Sao Paolo Province on March 8. Newly ordained, he is with the High Park community, preparing for future pastoral ministry. Last week, Fr. Martin Antony Kadamattu, a member of the Indian District, joined the community at St. Thomas More in suburban Toronto. No stranger to international ministry, Fr. Martin did his regency year in Argentina. He was ordained in 2011.

Jack Stabile, the uncle of Fr. Tim Gray, died on April 4. Services are April 12 at St. Bernadette’s in Fuquay-Varina, NC.

The North American Migration Committee shares a link on the US Conference of Catholic Bishops’ website. It is to a letter endorsed by more than 1,600 Catholic organizations, women and men religious and lay leaders to the Department of Homeland Security.

“As Catholic organizations and individuals, we are deeply concerned about the status of the U.S. refugee resettlement program and our current commitment as a country to welcome and integrate refugees in this time of extreme global need,” begins the letter. “Recently, the number of refugees resettled by the United States has plummeted. For Fiscal Year (FY) 2018, our country set an annual goal to admit 45,000 refugees, the lowest target in the history of the refugee program, which was formally begun in 1980. At the halfway point of FY18, the U.S. has resettled 9,616 refugees, setting the program on pace to not even reach half of the year’s low refugee admissions target…

“For 37 years, the U.S. has been proud to be the world leader in welcoming and resettling these most vulnerable refugees, and we, as Catholic organizations, priests, brothers, sisters, and lay professionals and volunteers, have been joyful partners to help accomplish this life-saving, humanitarian work. We know firsthand about the life-saving work that occurs on the ground in our communities to help welcome, accompany and integrate refugees in the United States. Refugees are more than just numbers and statistics, they are our neighbors, our friends, our fellow parishioners, and our brothers and sisters in Christ.”

The Sacred Heart Community at SHML will be hosting a celebration of the anniversaries of priesthood of several SCJs on September 14. Among those with ordination jubilees this year: Fr. Tom Lind and Fr. Richard Johnston (60 years); Fr. Mark Fortner (50 years); and Fr. Jim Walters, Fr. Tim Gray and Fr. Yvon Sheehy (40 years). Invitations will be sent during the summer.

As noted last month, the JPR Commission is seeking nominations for the First Annual Johnny Klingler Social Action Award. Mark Peters, JPR director for the US Province, writes the following:

“Who will be the first recipient of the annual Johnny Klingler, SCJ Social Action Award this spring?  It’s up to you!  If you know a person or group (SCJ or laity) who exemplifies Fr. Dehon’s dedication to social action, through their own efforts or leading/inspiring others, nominate them by April 16 for this $1,000 award to the charity or cause of their choice.  “Social action” includes serving or empowering those in need, educating others about needs or issues, or advocating for justice and peace.  Click here to submit a nomination or call Mark Peters at 414-427-4273.

Fr. Ed Kilianski begins the week with the meeting of North American administrations on Monday followed by US Provincial Council meetings April 10-11. April 15-19 he will be in South Dakota for a visitation and a meeting with the CPOSH board of directors. He will be back in Mississippi for SHSM board meetings on April 27, and take part in graduation exercises at SHSST on May 4.

Thank you to those who sent photos from Holy Week and Easter celebrations; many of them were published on the US Province Facebook page. Below is a photo of Fr. Wojciech Adamczyk, associate pastor of Our Lady of Guadalupe in Houston, TX, during a baptism on Holy Saturday, and Fr. Thi Pham  at the start of the Easter Vigil in Mississippi. 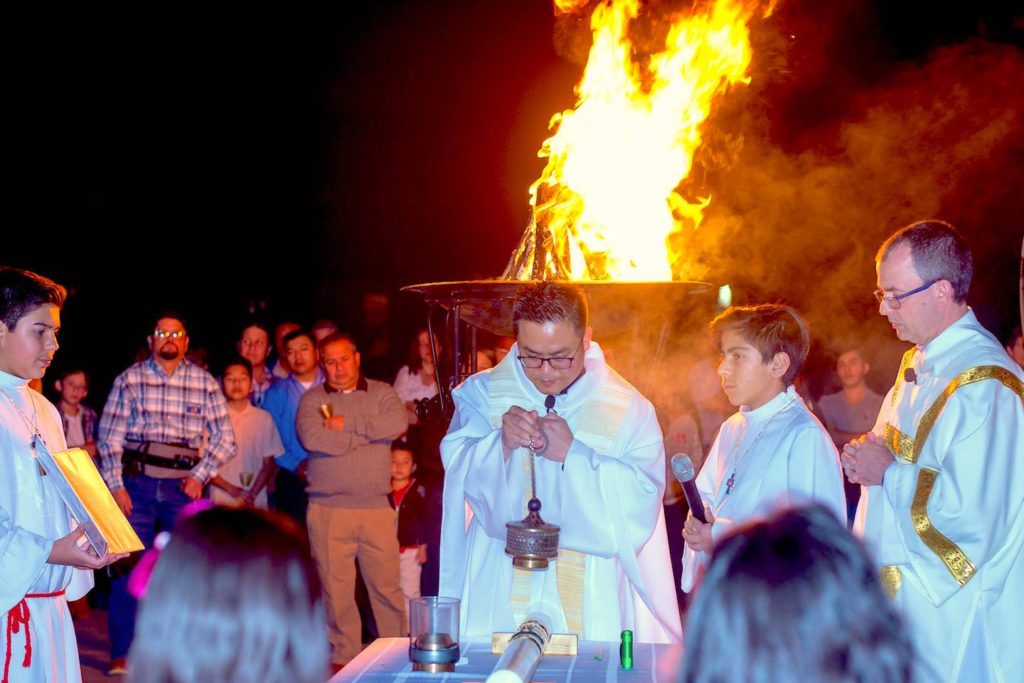