Earth movers, dump trucks and lots of piping are what greet visitors coming to Sacred Heart Seminary and School of Theology these days. As noted previously, the area in front of the entrance is being reconfigured to allow for more parking near the front doors and better drainage. The outdoor renovation will also include new landscaping and better lighting.

This week in Canada…

Starting this evening and running until Thursday at noon, August 13, the Canadian Region will hold its annual Regional Assembly at l’Ermitage Ste-Croix, Pierrefonds, on the shores of the Lac des Deux Montagnes in Quebec.

Fr. Stefan Tertünte from the Centro Studi Dehoniani in Rome will help participants reflect on the two first sections of the Final Message of the 2015 General Chapter. In light of the bilingual nature of the region, Fr. Stefan’s presentation will be in French.

On Wednesday night the participants will move to the SCJs’ house on Boul. Gouin in Montréal to celebrate the region’s jubilees. This year’s jubilarians include: Fr. John van den Hengel (50th anniversary of priesthood), Fr. Walter van As (65th anniversary of priesthood) and Fr. Richard Woodbury (50th anniversary of profession). Also during the celebration Br. Vermont Kifack Bengourion Zebaze will make his perpetual profession. Br. Vermont, a member of the Cameroon Province, came to Montréal for medical reasons. He plans to complete his theological studies in Canada.

One of our resident Canadians in the US Province, Fr. Wayne Jenkins, will join his northern confreres for part of the assembly.

The Justice, Peace and Reconciliation Commission has announced its social justice grants for 2015-2016.  Mark Peters, province JPR director, said that no new groups received grants this year, “but thanks to cuts in other areas of its budget, the commission was able to give four groups more money than last year for a total increase in support of 12%.”

Click here to go to the JPR website and learn more about the recipient organizations. Click here to read a new blog post about an action taken by one of those groups in which Frs. Johnny Klingler and Jan de Jong participated.

Lavere Walters, 86, the father of Fr. Jim Walters, is gravely ill and deteriorating rapidly. Please keep the family in your prayers.

Also, please remember the community’s founder, Fr. Leo John Dehon, whose anniversary of death we commemorate on Wednesday, August 12. He died in 1925.

Fr. Quang Nguyen, Br. Long Nguyen and Frater James Nguyen (no relation) were in Carthage, MO, this weekend for Marian Days. Marian Days is a pilgrimage of Vietnamese Catholics and their descendants done in honor of the Immaculate Heart of the Virgin Mary, as well as in memory of their homeland. The highlight of the festival is a huge outdoor Mass held on the grounds of the Congregation of the Mother Co-Redemptrix.

The vocation office staffs a booth at the celebration to share information about the Priests of the Sacred Heart and about vocations to the Church in general.

Pictured below are Fr. Quang and Frater James staffing the booth. Br. Long is on the other side of the camera. 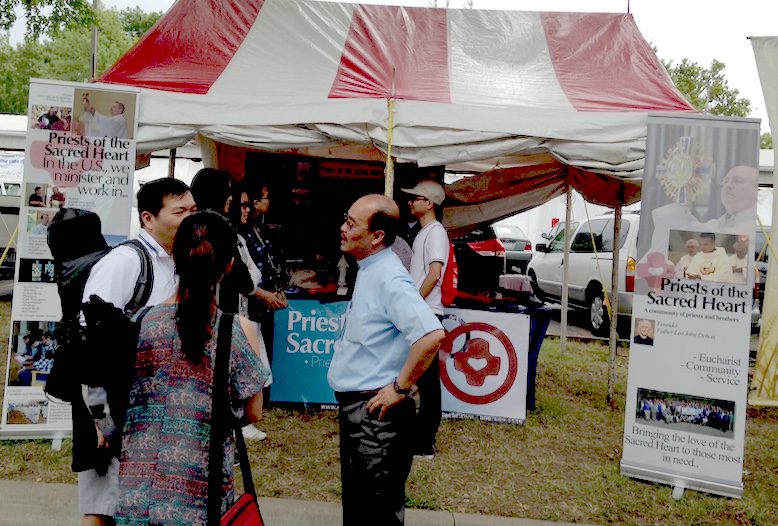 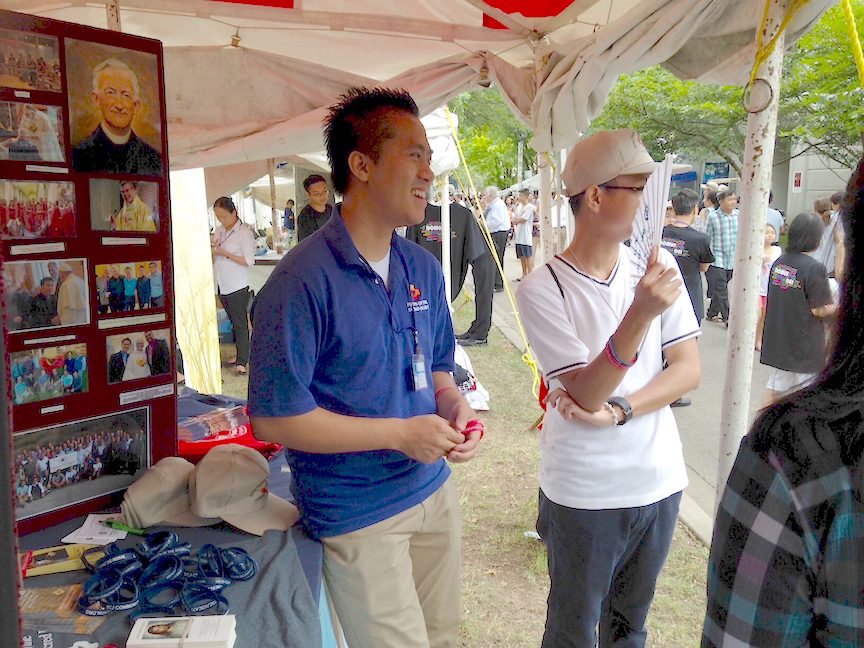 Fr. Wayne clarified that this was a “soft” opening done in conjunction with Ste. Marie’s annual “Pork and Cork” festival. The formal opening of the exhibit, put on by the Ste. Marie Foundation, will be Saturday, September 5 at 2 p.m. Patricia Reis, president of the foundation, writes that “We are honoring all of our religious teachers, pastors and administrators and hope that you might attend. [The ‘you’ being members of the Priests of the Sacred Heart] The event starts outside at the back of our Foundation House where we will dedicate a patio garden in memory of Jim and Dorothy Hahn –– a memorial donated by their children. You will be recognized during this ceremony. We will then move inside for a viewing of the exhibit, which will be blessed by St. Mary’s current pastor, Fr. Al Kemme. A reception will be held outside on the patio.”

A picnic will take place the next day at St. Mary’s beginning on 11 a.m. SCJs are invited to both events.

Also, last week we posted a link to reflections written by Frater Justin and Fr. Patrick about their visit to St. Marie with Fr. Wayne. Now added to the post is a third reflection by Fr. Joseph. Fr. Joseph and Fr. Patrick are ESL students from the Philippines who are learning about archives management during their time in the US Province.

Fr. Stephen Huffstetter and Fr. Carlos Enrique Caamaño Martín are pictured below riding their bikes off to the first day of Italian language classes in Bologna. The two new general councilors began their studies last week. 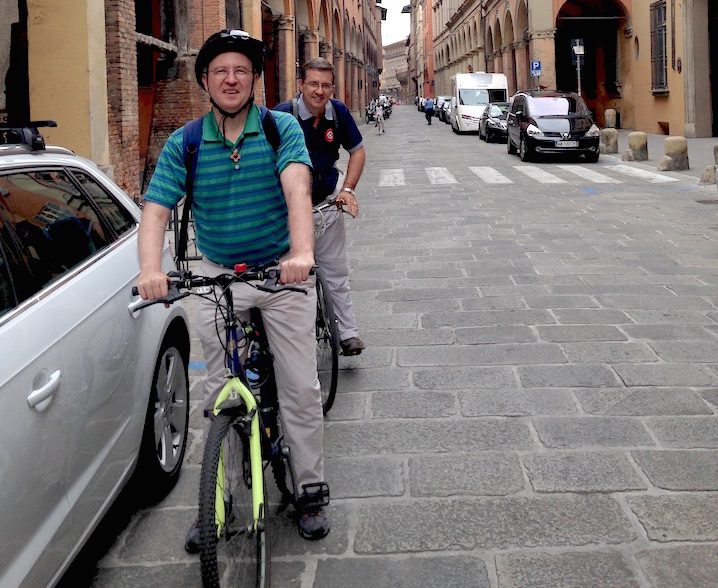