Retreat based in Dehonian spirituality

Last week (August 14-18) 25 members of the Canadian Region and US Province came together at Queen of Apostles Renewal Centre in suburban Toronto for “Open Hearts – Cœurs Ouverts” a retreat centered on five themes from Dehonian spirituality: God’s love, union with Christ, oblation, reparation and social spirituality.

The retreat was led by Fr. Jim Schroeder, Fr. John van den Hengel and David Schimmel. Reflection was done in small groups, in one-on-one settings and individually. It was a time to reenter Dehonian spirituality “with new perspectives decades after Vatican II, and decades too after the chapters of renewal in 1973 and 1979 which gave us our current Rule of Life,” said Fr. John.

“It feels as if I am now finally able to understand and enter into what we were given in the Rule of Life,” said one participant. “Why has it taken me 50 years to appreciate and grasp what some saw way back then?”

“The retreat truly was Spirit-led beyond my wildest expectations,” added Fr. Peter McKenna.

Frs. Johnny Klingler and Tony Russo, as well as province JPR director Mark Peters, were featured in an article in the August 16 Milwaukee Journal Sentinel. The article begins:

“On Monday night, House Speaker Paul Ryan will hold his first town hall open to the general public in his congressional district in nearly two years when he appears alongside CNN’s Jake Tapper at the Racine Theatre Guild.

“The Rev. Tony Russo would like to be in the room and plans on applying for an invitation. CNN will handle the attendance.

“Russo is among 12 members of the Priests of the Sacred Heart in Franklin who over the past few months engaged Ryan on the issue of immigration.”

The town hall is to be held this evening, August 21. As of this morning Frs. Tony and Johnny had not received an invitation to be present.

Last week Cardinal Blase Cupich of Chicago visited Sacred Heart Catholic Church in McAllen, Texas, on behalf of the Vatican. He was there to give a $100,000 donation from the Vatican to the church for construction of a new Humanitarian Respite Center. Currently, the center is based out of the parish hall.

Sr. Norma Pimentel, executive director of Catholic Charities in the Rio Grande Valley, spoke about the work of the center (which she initiated) at the province assembly in June. The center has assisted over 73,000 migrants, all with donations. The Priests of the Sacred Heart are among those who continue to financially assist Sr. Norma with her efforts. Click here to view a video of Sr. Norma’s presentation in June.

“There I experienced a sense of the internationality of the congregation,” he wrote in a reflection about the year. “I learned that it does not matter what language we communicate with, the people we serve, the places we go, and the missions in which we are involved. We are all Dehonians, living that dream of Father Dehon by being among the poor, by serving those who most need us, by serving the marginalized, and by being a positive presence for young people. Today I see that Father Dehon’s dream is alive in all the countries we serve. It is painted with many beautiful colors and each one of us puts our own colors in this beautiful mission, in this beautiful call from God that we call our vocation.

“We are many hands working together, but just one heart which has united us as one congregation, the heart of that man who wanted to dedicate his life to God as a servant of love and reconciliation. Thus, we are united in the heart of Father Dehon to find our vocation in the Sacred Heart of Jesus.”

Fr. Steve Wiese has been discharged from Froedtert Hospital; he now at the Congregational Home for additional support and rehabilitation following a stroke.

Paul Phong Hoang and Henry Nguyen were received into the novitiate for the US Province on August 14. Approximately 40 SCJs, including ESL students from Sacred Heart Seminary and School of Theology, attended the prayer service held in the novitiate chapel. Fr. Ed Kilianski received the novices; Fr. Byron Haaland is novice master (he was installed by Fr. Ed earlier in the day) and Fr. Andrzej Sudol is assistant novice master. Fr. Andrzej was postulant director for Paul and Henry.

Just as the novices are in formation, so too is the novitiate chapel. The building that houses the novitiate was purchased earlier this year. A former carport is being enclosed to serve as the chapel; the walls are up, but they have yet to be finished. Dehonians lined the un-painted walls of the chapel for the ceremony, lending their prayers and support to the new novices.

Fr. Ed Kilianski will go to Montréal tomorrow to take part in the funeral services for Br. Luc Coursol. A member of the Canadian Region, Br. Luc was a classmate of Fr. Ed’s in novitiate.

Next week Fr. Ed has meetings with the Provincial Council August 29-30; the evening of August 30 he will install the new president-rector of Sacred Heart Seminary and School of Theology during the Opening Mass of the new academic year. Fr. Ed will be in Houston September 5-12 and in South Dakota September 15-18.

One of Fr. Tom Cassidy’s recent posts on the province blog is about the celebration of Founder’s Day in India (the commemoration of the death of Fr. Leo John Dehon on August 12, 1925).

“Saturday began with Eucharistic Adoration and the presentation of our Dehonian Crosses to the 15 new students from Dehon Prema Nilayam followed by the blessing of new juppas (shirts) for all in attendance,” wrote Fr. Tom. “These were made to measure by the ladies of the Sacred Heart parish sewing center in Vempadu. I was asked to bless the crosses and distribute them as well as bless the juppas.”

The SCJs put on their new juppas for the group photo below. Can you find Fr. Tom? Click here to read his full blog post. 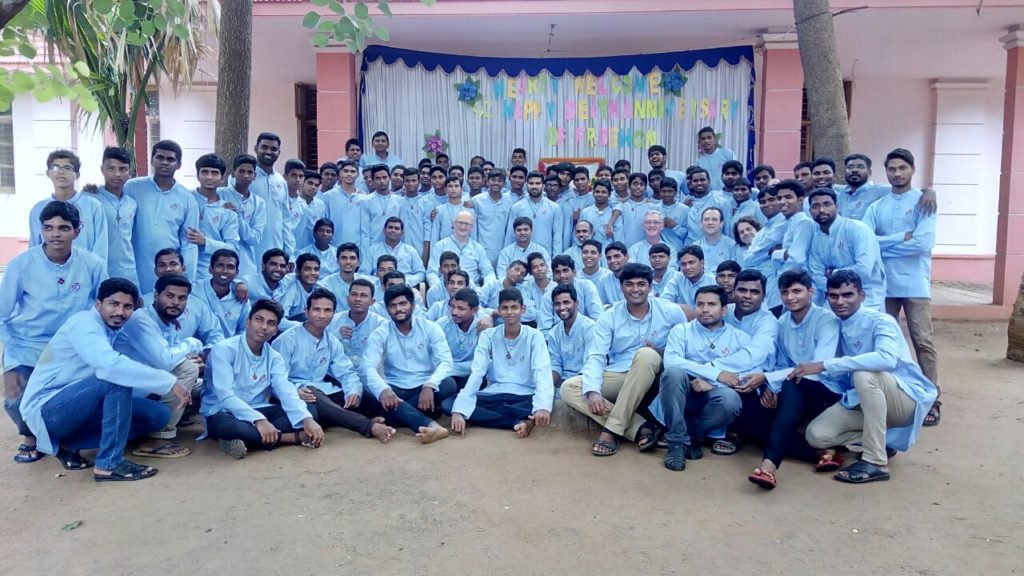