Father Mark heads back to the novitiate

Fr. Mark Fortner, SCJ, recently took a trip down memory lane – or more accurately, a paved path badly in need of repair – visiting the site of the former Sacred Heart Novitiate in Ste. Marie, IL. “It was only upon arriving back home at Sacred Heart at Monastery Lake that I realized that this year is the 60th anniversary of becoming a postulant and then entering the novitiate.” He, along with fellow SCJs Fr. Tom Cassidy, Fr. Pat Lloyd and Fr. Steve Pujdak professed their first vows on September 8, 1962.

“I was accompanied on a tour of the property by Jane and Norbert Ochs,” said Fr. Mark. He noted that the Ochs were married the same year that he was in novitiate; Jane became the administrative assistant to the community, a role she held until the novitiate moved in 1972.

“Fr. Michael Noonan, SCJ, was novice master, Fr. Tom Sheehy, SCJ, was the assistant novice master, Fr. Bernard Rotermann, SCJ, was the superior of the community,” said Fr. Mark. “Also there at the time was Fr. Tom Lind, SCJ, Br. John Thomas, SCJ, and former SCJ Br. Charles Schweitzer. There was also our cook, Larry Huber. The Ochs had wonderful stories, aided by an excellent memory of that time. They showed me the chapel (including the choir loft where we learned to sing Gregorian chant), the dining hall, the kitchen, the study hall, the library, the recreation room, and other areas of the building with the exception, unfortunately, of the portion of the building that was destroyed in a fire.

“Outside in front, they showed me the asphalt walking path where –– in procession –– we novices would pray the rosary together with the Mary Grotto within eyesight. They also pointed out the multiple car garage, the now filled-in swimming pool that was added, the old workshop, the gym and, further out in the field the pole barn, the machinery shed, and the pond where Fr. Phil Elmer, SCJ, taught me how to swim. Finally, before taking me back to St. Mary of the Assumption parish, where I stayed the night, they took me to see the Embarras River which flows behind the novitiate. As I drove home, the feelings of joy and excitement that I felt driving to Ste. Marie were commingled with feelings of gratitude for the couple who showed me around, the pastor, Fr. Dean Probst, who welcomed me so graciously (Fr. Mark is pictured above with Fr. Dean; Fr. Mark is on the left), for my family, the many SCJs, and others both here and abroad who, through the years, have accompanied and supported me in my God-given religious vocation.”

The Fridge Notes will take an end-of-the-summer break during the next two weeks. There will be no Fridge Notes published on August 30 or on Labor Day, September 6. Please continue to visit our Facebook and Instagram pages for updates and photos. 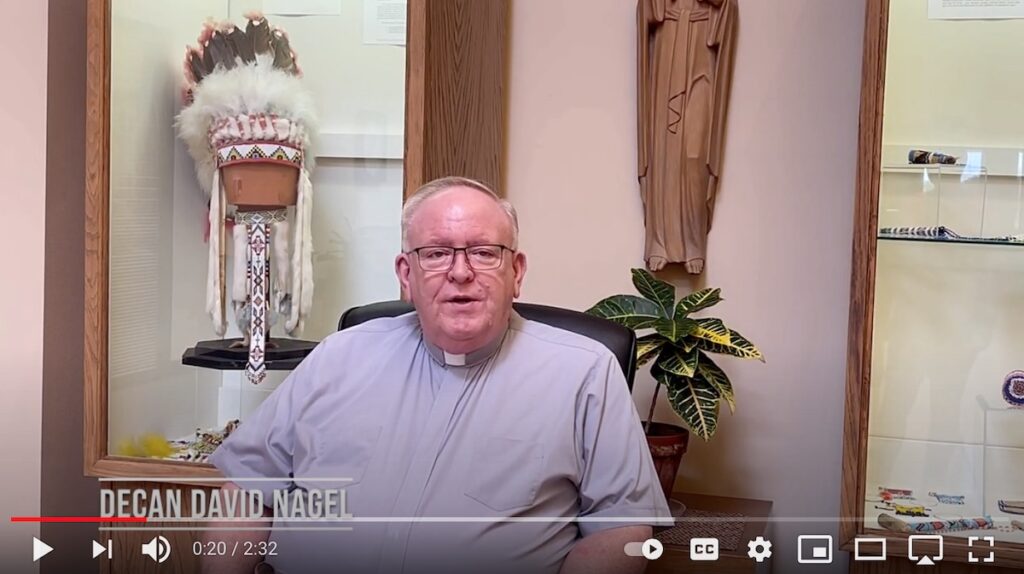 In May, 1991, the Aktá Lakota Museum officially opened its doors on the grounds of the SCJs’ St. Joseph’s Indian School in Chamberlain, SD. For over 30 years, the museum’s collective memory has provided exceptional research, exhibit and educational services to scholars, the students of St. Joseph’s and many others interested in learning about the culture and heritage of the Northern Plains Indian people.

To commemorate the anniversary, the museum is sharing video tributes each month through the end of the year that speak to the evolution of the museum, its collections, educational programs, and more. Click here or on the image above to view a video narrated by Dn. David Nagel, SCJ, in which he reflects on the history of the museum.

It was on this date in 1936 that Blessed Juan María de la Cruz, SCJ, was martyred for his commitment to the priesthood. On March 11, 2001, Pope John Paul II declared him blessed, along with other 233 martyrs of the Spanish Civil War. His feast day is on September 22.

In the midst of the turbulent years of civil strife in Spain from 1931-36, the Catholic Church in Spain suffered one of the most difficult persecutions in its history. Churches, seminaries, rectories, monasteries and convents were sacked and destroyed. Thirteen bishops, 4,184 priests, 2,365 religious brothers, 283 nuns and thousands of lay Catholics were killed.

On July 23, 1936, Fr. Juan María traveled to Valencia seeking refuge with one of the congregation’s benefactors. Walking from the train station he passed the church of “los Santos Juanes” in the center of the city. There he witnessed men desecrating and burning the church. Fr. Juan shouted in protest. When the men heard his shouting, they said to each other: “He is a reactionary.”

That was all that was needed to arrest him.

On the night of August 23, 1936 – 85 years ago – Fr. Juan María, together with nine other prisoners, was taken south of Valencia to be shot. The next day the bodies of the victims were thrown into a common grave in the cemetery of Silla.

+ Fr. André Côté, a former SCJ with the Canadian Region, died on August 5 at the age of 77. He suffered from Leukemia during the past two years. Fr. Richard Woodbury, SCJ, writes that “Fr. André was a student at Séminaire du Sacré-Coeur from 1956 to 1962. He then was a novice in Sainte Marie. After his studies in philosophy and theology, he was ordained a priest on June 1, 1969, in his hometown of Grenville, QC.”  Among his assignments was as a teacher in Pointe-au-Chêne and as a parish priest in the diocese of Saint-Jérôme. He eventually incardinated into the diocese. 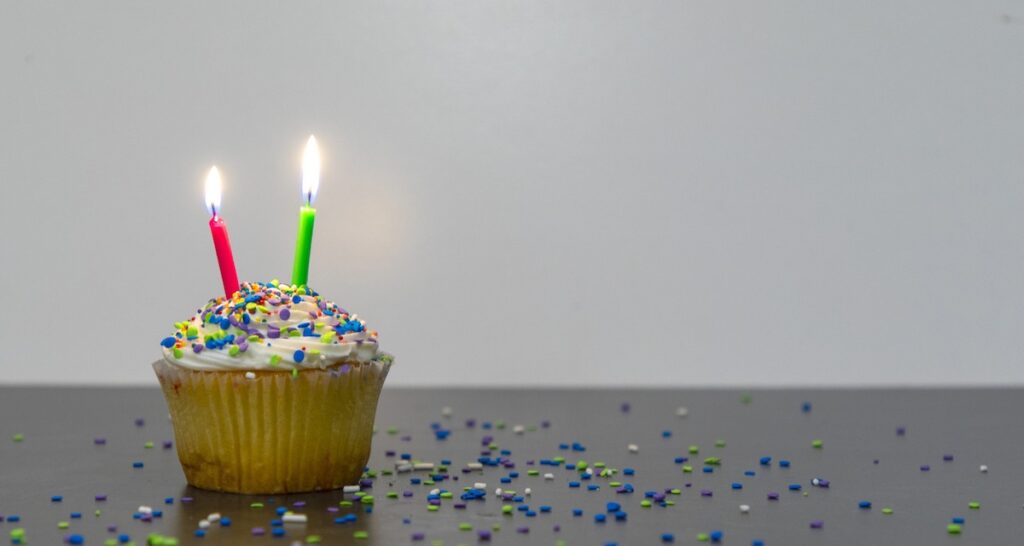 Bob Hergenroeder, a former SCJ (professed first vows in 1972), is being treated for metastatic melanoma of the liver. Please keep him in prayer.

– Alfonso Pizano is the newest candidate to join the formation program at Sacred Heart Monastery. His contact information has been added to the North American online directory. In a few weeks we will share more about him and the rest of the formation community in the annual “Meet Our Students” feature on the province website.

– Fr. Élie Munzungu Kasongo-Ngoy, SCJ, has joined Fr. Greg Murray, SCJ, in ministry in Gatineau, QC. His contact information has been updated in the online directory.

Br. Frank Presto, SCJ, reminds SCJs in the US Province that they have until August 31 to remove their name from the slate of candidates for Provincial Superior and/or Provincial Council in preparation for the January US Province elections. Requests – with explanation – must be made to Fr. Ed Kilianski, SCJ, by the deadline. 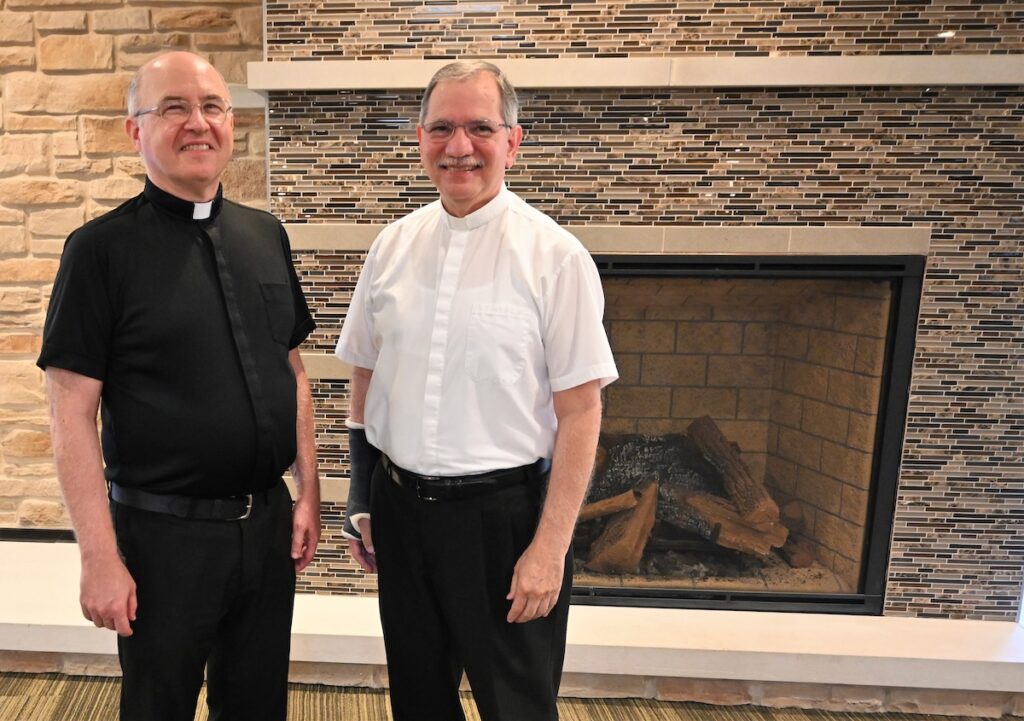 As you may have noticed last week in the photos from the Entrance to Novitiate Ceremony, Fr. Stephen Huffstetter, SCJ, vicar general, is visiting North America following a year-long delay due to the pandemic. He was in South Dakota over the weekend and will be with the Mississippi community August 25-29. On the way to Pinellas Park, Fr. Steve says that he looks forward to driving through Alabama because “it will be the 50th state that I will have visited!” Fr. Steve will be with SCJs in Pinellas Park September 1-3.

September 10 he will visit the formation community at Sacred Heart Monastery, and September 17-20 he will be in Houston. Before returning to Rome on September 28, he plans to visit with the SCJ communities in Canada, spend time with family, and attend the Divine Heart Seminary All-School Reunion. Fr. Steve is pictured above with Fr. Raúl Gómez-Ruiz, SDS, SHSST president-rector, during a visit to the seminary last week.

Fr. Byron Haaland, SCJ, already has the new novices hard at work on the Sacred Heart Novitiate property. On Saturday they planted a Pin Oak tree and named it after the first SCJ to minister in the United States: Fr. Matthias Fohrman. Pictured here are Michael Wodarczyk, Jacob Smith, Jonathan Nguyen-Vuong and Fr. Byron (novice master). The Dehonian version of Ora et Labora! 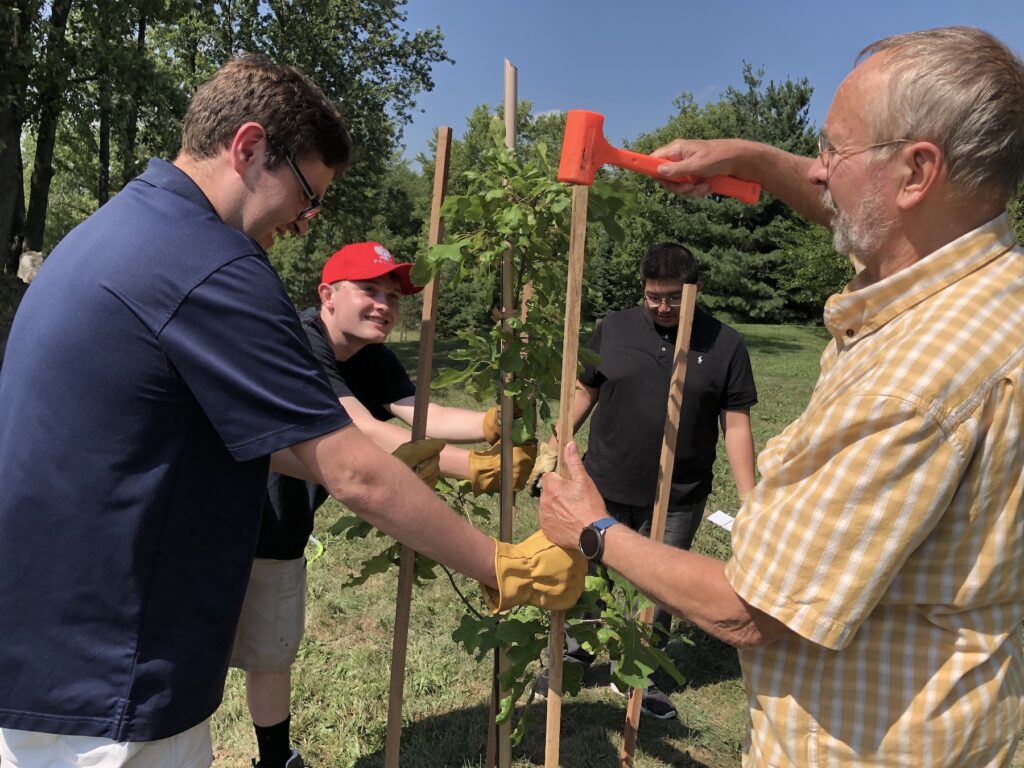