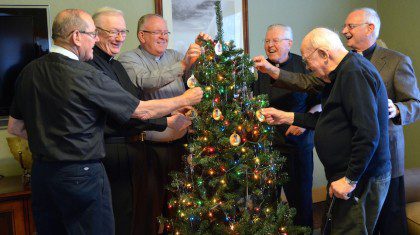 Members of the Sacred Heart community at Sacred Heart at Monastery Lake decorated their tree last week with ornaments that represent gifts to the community from its benefactors. It is a tree-trimming tradition that goes back many years in the province.

“Christmas, today more than ever, speaks of hope. For this appeared ‘the grace of God, that brings Salvation,’” writes Fr. José Ornelas Carvalho, superior general, in his Christmas letter to the major superiors of the congregation.

+General Jacques Melezieux-Dehon, the great-nephew of Fr. Leo John Dehon, died Nov. 25. He was the son of Martha Dehon, the daughter of the Fr. Dehon’s brother Henri. He leaves behind his wife Nicole and their daughter Béatrix.

Click here to download the most recent edition of the SCJ News. Included are excerpts from Fr. Stephen Huffstetter’s journal during his recent travels in the Congolese Province, a feature on Fr. Leonard Elder, who was a missionary in Congo for almost 10 years before entering the seminary, and a report on Fr. Yulius Sunardi’s recently defended doctoral thesis.

The print edition goes in the mail later this week.

As noted previously, Fr. Yulius Sunardi (“Nardi”) recently defended his doctoral thesis. On Saturday, Dec. 13, Fr. Nardi received his doctorate during commencement exercises at Marquette University in Milwaukee. Among those in attendance was Fr. Stephen Huffstetter who shares this photo of Fr. Nardi receiving his degree.

Matt Garcia-Prats, principal at Our Lady of Guadalupe School in Houston, wrote a piece for last week’s Dehonian Spirituality update about the celebration of the parish feast:

“Each year on December 12th, Our Lady’s feast day, the spirit, enthusiasm and devotion of the community becomes more evident. The days surrounding the feast day are ones which I can only describe as celebratory humility. Catholics from all over the Houston area flock to Our Lady of Guadalupe parish in order to pray and celebrate. The feeling is simply infectious. The devout bring roses which drape the altar and the grotto. These roses are an outward symbol of an inner devotion. My spirit is reinvigorated and my commitment to serve is renewed on this day.

“God’s love is real, and my service to the students and families at Our Lady of Guadalupe school is my own version of the rose that I leave at the altar. It is the way that I know best to demonstrate my gratitude for the blessings that God has bestowed upon me.”

Click here to read the rest of his text, as well as other reflections and prayers based in the Dehonian charism.

Congratulations to ESIC, the internationally acclaimed business and marketing school established and operated by the Spanish Province. The multi-campus institution kicked off its 50th anniversary celebrations with an employee dinner in Madrid last week that brought together over 300 people from Madrid, Barcelona, Valencia, Zaragoza, Navarra Seville, Malaga and Brazil, as well as their partner sites in Bilbao and Granada.

Yesterday (Dec. 14) it was the SCJ community’s turn to celebrate the anniversary. Among the concelebrants at the anniversary Mass were Fr. José Ornelas Carvalho (superior general) and Fr. Aquilino Mielgo Domínguez (general treasurer and former provincial superior of the Spanish Province).

Fr. Bernie Rosinski writes that the “SCJ community at St. Joseph’s Indian School anticipated the ‘open house’ suggestion mentioned in the CMSM plan for the Year of Consecrated Life. On Sunday, Dec. 14, as a participant in the ‘Parade of Homes’ program sponsored by the local Cozard Library [Chamberlain, SD], we welcomed over 75 guests. Terri Powell, our housekeeper and cook, also served as ‘interior decorator’. The visitors were able to see the entire living complex, including rooms like the ones SCJs live in, the common living and work areas, and the chapel. There was even an ‘elf on the shelf’ contest for visitors to find amidst the Christmas decorations. Tour guides were Terri, myself and Fr. Anthony Kluckman.”

A limited number of print editions of the recent Dehoniana, the focus of which is Fr. André Prévot, are available. Click here to request a copy. Please put “Dehoniana” in the subject head.

After three weeks in Congo Fr. Stephen Huffstetter will be close to home for the next several weeks.

He has meetings with the Provincial Council Tuesday and Wednesday (Dec. 16-17). January 11-16 he has a visitation with the Sacred Heart Community at SHML and from January 21-25 he will be in Pinellas Park for a visitation. He’ll leave for Florida a few days prior to visit with family.

Our thanks to Br. Andy Gancarczyk for sharing photos that he took at last week’s celebration of Our Lady of Guadalupe at OLG, Houston. Pictured below is Fr. Ed Kilianski, OLG pastor, with parishioners dressed in costume. Costumes and performances are a significant part of the feast-day celebrations. More photos from Br. Andy are on the province Facebook page.

EDITOR’S NOTE: Our apologies to Br. Andy! Last week we missed noting him as a member of the pastoral team at Our Lady of Guadalupe. He has been a member of the Houston community serving at OLG since last summer. 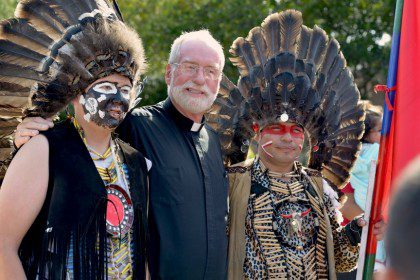