We start the week with the celebration of the feast of the Immaculate Conception on Dec. 8 and bring it to a close on Friday, Dec. 12, with the feast of Our Lady of Guadalupe.

The celebration of the feast of Our Lady of Guadalupe at our parish of OLG in Houston is one of the most significant moments of the parish year. Hundreds, sometimes thousands of worshippers, squeeze together for the many liturgies that begin on the eve of OLG and continue through the feast day itself.

The highpoint of the celebration is midnight Mass at a makeshift altar outside in parish plaza. Visible behind the altar is a shrine to Our Lady of Guadalupe. By midnight, the patroness of the Americas is drowning in flowers. Bringing flowers to Our Lady is a part of the feast’s tradition, echoing the story of Juan Diego carrying roses in his tilma.

Click here to read about and view photos from the celebration of OLG in 2012 when it closed the 100th anniversary year of the parish.

Final days in the Congolese Province

Fr. Stephen Huffstetter’s last journal entries from the Congolese Province has been posted on the province blog. At the end of last week he wrote that “Fr. Zenon [Congo’s provincial superior] invited his provincial council and staff to have a wrap-up meeting with us. They laid out their overall vision for programs and building projects they dream about developing.

“Boldest is to build a new school to serve the needs of the abandoned children who come through the St. Laurent Center that would also serve the needs of that area of the city as it grows in that direction. Fr. Jonas, the provincial treasurer, was able to clearly break down the costs of each project. The small amounts they are able to raise locally , coupled with the amount of grants that might come in from other provinces, will determine whether these projects can happen sooner or remain but a distant dream. But the young and growing province is not afraid to dream big as its members try to meet the many social and spiritual needs of the areas entrusted to them.”

Click here to read the rest of this and other journal entries. Fr. Steve returned to the States over the weekend, along with Frs. Charles Brown and Leonard Elder from the US Province and Fr. Claude Bédard of the Canadian Region. As noted previously, the four SCJs represented North America at the 50th anniversary commemorations for the SCJ missionaries who were killed during the Simba rebellion. 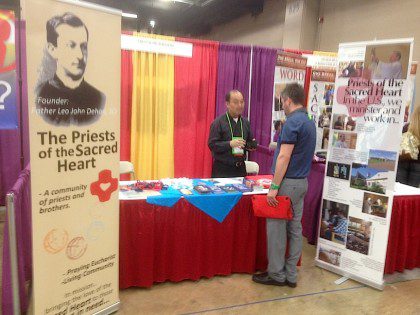 Br. Long Nguyen and Fr. Quang Nguyen from the province vocation office were at the National Conference on Catholic Youth Ministry in San Antonio Dec. 4-6. Fr. Quang is pictured above talking at the SCJs’ vocation booth.

Reflecting on the Rule of Life

Last week Friday (Dec. 5) the Priests of the Sacred Heart celebrated the 91st anniversary of the approval of their Constitutions by the Holy Father.

“Years later, the Second Vatican Council and Pope Paul VI charged every religious community with the work of renewal, including updating their Constitutions or Rule of Life,” wrote David Schimmel, province director of Dehonian Associates, in the most recent Dehonian Spirituality update. “Over many years and three General Chapters, the Priests of the Sacred Heart struggled with this challenge.”

David shared a recent reflection by Fr. André Perroux, one of the principal authors of the current Rule of Life, about his experience of helping to prepare it:

“We sought above all to re-express the spiritual aim of the Congregation as Fr. Dehon wanted by recovering certain key words like oblation, union with Christ in Eucharistic celebration and adoration, fraternal life, mission, and all of that fed by a spirit of love and of reparation or immolation.

“…The Chapter of 1979 approved an important modification in the plan of the Rule of Life: to start with the faith experience of Fr. Dehon and with our initiation in the Gospel in the Church,” he continued. “So, we tried to express the faith experience of Fr. Dehon, and how we can express and live this “spiritual aim” in and for the world. On the whole, the Vatican gave a positive judgment and the approbation was not delayed. We were one of the first Congregations of some importance [at that time we had more than 3,000 members] to present our new Constitutions. Consequently, the Congregation for Religious recommended that several Congregations, mainly women’s, come and get advice from us.”

Click here to read the rest of Fr. André’s reflection on the Dehonian Spirituality page:

Click here to receive the Dehonian Spirituality updates by email.

New on the JPR blog

Mark Peters, province director of Justice, Peace and Reconciliation, posted a reflection on the JPR blog last week about recent events in Ferguson, MO, related to the shooting death of Michael Brown.

“The ongoing saga of Ferguson, MO and its reaction to the shooting of 18-year-old Michael Brown still seems to have the nation’s interest a week after the grand jury verdict was handed down and immediate protests died down, which is saying something given our short attention span and the media’s constant drumming up of the next big thing,” writes Mark.

“It may be because, as someone has suggested, our personal reaction to the events in Ferguson are a ‘racial Rohrshach,’” he continues.  “There are probably three main ways to view the overall story:  1) complete denial that this has anything to do with race, often combined with denunciation of ‘thug’ behavior and ‘race-mongering’ protesters; 2) outrage at injustice and white ‘cluelessness’; or 3) a sense that truth, as it often happens, is somewhere in the middle.”

Click here to read the full blog post and access various resources in regards to similar events.  Also on the site: remembering the martyrdom of four US women religious in El Salvador 34 years ago and new advocacy opportunities on immigration, torture, tax justice.

The US Province received word last week that it earned a five-year reaccreditation from Praesidium, an agency that educates, develops strategies, and reviews organizational procedures in regards to safe behavior with children and vulnerable adults. Click here to learn more about Praesidium.

In preparation for the printing of the annual “Days of Celebration and Commemoration” (also known as the “Birthday Calendar”), the online directory for SCJs in Canada and the United States was recently updated. The directory is available in the Members’ section of the US Province website. For assistance in accessing the directory, click here.

An electronic version of the Birthday Calendar is also available from the Members’ section. The print version will be in the mail to SCJs in North America next week.

With a week that begins with the feast of the Immaculate Conception and ends with the feast of Our Lady of Guadalupe, it seems fitting to conclude the Fridge Notes with a prayer for feasts of Mary from This Day of God, the community prayer book of the Priests of the Sacred Heart:

God of love,
by the power of the Holy Spirit,
through the faith of Mary’s heart,
you gave us your beloved Son, Jesus Christ.
He freed us from sin and death,
and he gave us the grace
to live in communion with one another
and with you.

God of grace,
grant us the Spirit you gave Mary.
Give us a faith like hers,
that we may hear your word and keep it.
With Mary, grant us a disciple’s heart.
Send us into the world
to show the human race
the love you revealed in the heart of Christ.