A time of celebration at OLG

Parishioners at Our Lady of Guadalupe in Houston have already begun to prepare for their December 12 patronal feast. On the evening of Saturday, December 3, the OLG community began its novena with a 7 p.m. Mass; Masses will continue on each night of the novena. Tomorrow, December 6, there will be communal reconciliation, and on the night of the vigil, December 11, the parish will celebrate midnight Mass. Held in the parish plaza, the liturgy attracts thousands of worshipers each year.

Fr. Tom Cassidy, provincial superior, and Fr. Tony Russo, former OLG pastor,  will be among the SCJs joining the OLG community in its celebrations.

Br. Vicente Rosário Afonso, a member of the Central Brazilian Province, died on December 5. He was born in 1919 and professed in 1946.

Fr. Joe Dean reports that his brother, Robert Dean, has taken a turn for the worse. The original tumor with which he was diagnosed has grown and now there is a second. He is in home hospice care. Please keep Robert, and the Dean family, in your prayers.

Also, Fr. Bill More of the Canadian Region is in declining health. He no longer eats nor drinks. Fr. Bill has been in an assisted living facility near Ottawa for the past few years.

Fr. Byron Haaland has a new email address. Please discard all other addresses that you have for him and use the following: 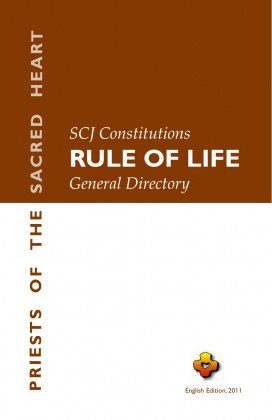 The general edition of the SCJ Rule of Life in English has been updated. Click here to download an electronic version (PDF) from the province website. As noted on the download page, this electronic version should be considered as a DRAFT version until the document is finalized and printed at the end of the year.

ALSO NOTE that this is the GENERAL edition. The Rule of Life for the U.S. Province will include the province directory. It is anticipated that this edition will be completed by the end of the year.

Although printed editions will be available, it is hoped that electronic copies can be used as much as possible. The electronic document is less expensive and it gives the reader the option of using search tools.

Br. Frank Presto, provincial secretary, will have more information about the U.S. Province edition of the Rule of the Life in the weeks ahead.

“It was one of the highlights of my life with the community,” said Fr. Ed Kilianski. “Excellent, just excellent! Well organized. And to meet with so many of our SCJs from around the world – it was really a shot of energy for me in my vocation as an SCJ. Incredible.”

The strong words of praise from Fr. Ed were about the November 18-22 SCJ Justice and Peace gathering in Madrid, Spain. Held at ESIC, the world-renowned business school operated by the Spanish Province, the conference was split into two parts. From November 18-19 approximately 200 people gathered – including approximately 25 invited SCJs from around the world as well as ESIC students – to learn about and discuss Caritas in Veritate, the first social encyclical of Pope Benedict XVI. Fr. Ed represented the U.S. Province and Fr. Peter McKenna represented the Canadian Region.

Released in 2009, Caritas in Veritate addressed the Christian response to global development. The document finds even more relevance today as the world grapples with economic concerns that affect all.

During the second part of the gathering, November 21-22, Fr. Ed joined other SCJs and collaborators to “basically discuss reconciliation,” he said. “How do we do reconciliation on the local level in our communities; how do we do it on a worldwide basis?”

SCJs focused on the need for collaboration – both internally among SCJs within their entities and on an international level – as well as collaboration with others. “There is strength in cooperation or collaboration,” said Fr. Ed. “We often returned to this theme.”

Working in linguistic as well as regional groupings SCJ participants discussed reconciliation and collaboration, as well the 2000 General Conference in Recife Brazil. The theme of that conference was “The Economy and the Reign of God.” SCJs in Madrid reviewed proposals that came from the conference. “Some proposals have not been implemented so it was important to revisit what had come from the conference,” said Fr. Ed.

“From the very first moment of the meeting, many of the participants affirmed the significance of previous SCJ documents but indicated that we are at such a critical, crucial moment in our history that it is time for us to adopt and implement a common collaborative SCJ justice, peace and reconciliation plan of action for each member and for the congregation as a whole,” said Fr. Peter.

“We are approximately 2,200 Dehonians in 42 countries,” he continued. “Think of the difference we can make when and if we collectively are ministers of reconciliation in whatever context we find ourselves.”

From their discussions, the small groups developed a number of proposals of their own which appear in the final document of the conference.

“We had some very good discussions, especially in regards to reconciliation,” said Fr. Ed. “But for me overall, the most important part of the gathering was the fraternity that I experienced among my SCJ brothers from around the world. The camaraderie and the hospitality were incredible. It was also eye-opening for me to learn from SCJs in other parts of the world that many of us struggle with common issues –– good and bad. It was really an experience of ‘We the Congregation.’ I left feeling energized about being an SCJ. I met so many interesting members of the congregation from all over the world – bright young religious from Africa and Asia, from all over.”

Click here to the read the final message from the conference, which includes the list of participants.

Fr. Tom Cassidy is in Texas this week; he will be back in Hales Corners for meetings with the Provincial Council the week of December 12.