Several members of the US Province and Canadian Region have been in Rome during the past two weeks. Dn. David Nagel was the first to arrive for meetings of the General Finance Commission. Soon after, Fr. Ed Kilianski (US provincial superior) and Fr. John van den Hengel (Canadian regional superior) went to Rome for the Major Superiors Meetings. And finally, Br. Frank Presto (provincial secretary for the US Province) and Fr. Richard Woodbury (regional secretary for Canada) headed to Rome for the secretaries workshop. Fr. David Szatkowski was also in Rome for a meeting of several of the congregation’s canon lawyers.

A room with much significance

“It has been a year-and-a-half since we have gathered together in this room,” said Fr. Heiner Wilmer in his opening comments at the first Major Superiors Meeting of his administration. “I am respectful of this room; it is a place that has changed my life, changed OUR lives.”

The reference was to the 2015 General Chapter at which Fr. Heiner was elected as superior general of the Priests of the Sacred Heart.

The Major Superiors met at the Generalate in Rome from November 28 to December 2. Gathering approximately every two to three years, it is an opportunity for the superiors to dialogue with the general administration and have input on future planning.

“You are leaders, you are experienced, you are wise and each one of you cares for the many brothers and people the Lord has entrusted to us and our mission,” said Fr. Heiner.

He talked about parish ministry and warned the major superiors not to allow it to become the focus of their entity’s work. “We, the General Council, are not against parishes but we have to remember that Fr. Dehon stepped out of the parish structure to focus on mission, the formation of priests, social work, education and media,” he said. “How much energy do we invest in thinking and planning beyond parish work?”

“Migration is the theme of our century,” Fr. Heiner continued. “Its impact is different in each country but we must react. Put it on your agenda, on the agendas of your local communities and at the level of your entity. Our response to migration may be different but we cannot avoid the theme. Each entity must give a concrete response to migration.”

And, click here to go to DehoniansWorldwide, the congregational Facebook page which has links to all of the reports, videos, photos and other information from not only the Major Superiors meeting, but of all of the events taking place at the Generalate.

“I feel very humble speaking to you since most of the secretaries here have a lot more experience than me,” said Fr. Pedro. He succeeded Fr. Heru Ismadi as general secretary only four months ago.

As is often the case, the request to be secretary came as a surprise to Fr. Pedro. Administration is a task to which few priests and religious aspire. “It is easy to just think ‘somebody has to do it,’ and accept it, hoping that it won’t last too long” he said. “It is what I thought.

“But there is a spirituality to the work of the secretary. Don’t look at the other things that you could be doing, such as pastoral ministry. There is no contrast between administration and pastoral ministry.”

Br. Frank echoed Fr. Pedro’s remarks: “This is a ministry of service to your entity, to the Congregation and to the entire Church. Don’t let anyone downplay your service –– ever!”

Click here to read a report from the first day of the Secretaries Workshop. The gathering runs until December 7.

“As my pastoral experience in Brazil continues, I have the privilege now of being at the Instituto Meninos de São Judas Tadeu (The Institute Saint Jude Thaddeus) in São Paulo, which is one of many Priests of the Sacred Heart ministries in this province,” wrote Frater Juan Carlos Castañeda Rojas, a seminarian doing his ministry year in Brazil. “The institute was founded in November 16, 1946.

“Since its creation, the institute has experienced many changes and many challenges. It began as an orphanage but in 2006 the institute had to change its work as a response to the law in Brazil and also as response to new needs of the people. However, something that never has changed is its ideal of bringing to all people a restorative love by embracing, protecting, and educating babies, children, teenagers, and young adults.

“This mission exists because we as Dehonians, as well as everyone who works with us, believe in a great love that can heal and repair broken hearts. This is how each one of the kids and young adults that we help are experiencing the greater love of God through us.”

Fr. Ed Kilianski returned to the United States on Sunday after a week in Rome for the Major Superiors meeting. December 14 he has meetings with the Provincial Council (the two-day meeting was shortened to one) and on December 18 he goes to Pinellas Park, Fl., to lead a retreat for Advent. He returns to Milwaukee on December 23.

Fr. Mark Forther sends a photo from St. Paul’s Minor Seminary in Palembang, Indonesia (you will have to look closely – he is pictured WAY in the back). This is a joint diocesan and SCJ seminary in South Sumartra. There are 135 minor seminarians. “It is expected that some 15 from the graduating class will be accepted for the one-year long postulancy program before being eligible for the novitiate,” he wrote. Fr. Mark is spending several weeks visiting the country in which he ministered for 30 years. 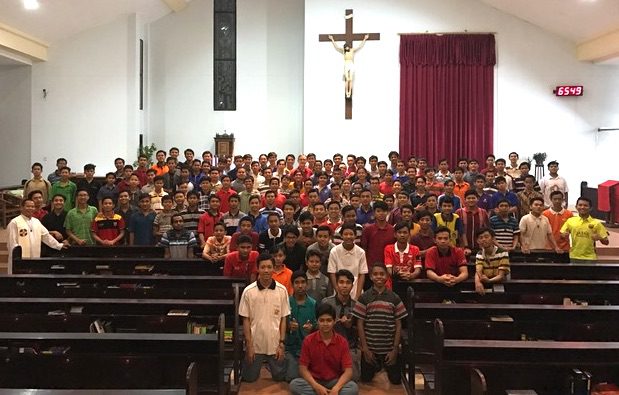