“We are here not only to continue a tradition, but also to commit ourselves to the future of our congregation in North America,” said Fr. Gustave Lulendo, SCJ, in his opening remarks at the December 6 meeting of the administrations of the US Province and Canadian Region. Approximately twice a year the North American councils get together to dialogue on shared concerns, seek ways of collaboration, and simply connect so that each is mindful of the people, ministries and issues of their neighbors across the border. Appointed just this year as regional superior, this was Fr. Gustave’s first time hosting the event; the meeting took place in Toronto.

Among the issues discussed: internationality (living and ministering together as an international congregation), migration (Fr. Peter McKenna, SCJ, updated the councils on the work of the North American Migration Committee), the Dehon Study Center in North America (how to continue to support and enhance the work of the center, as well as the Dehonian Associates Office), the North American Theological Commission (in particular, its preparations –– in collaboration with other continental commissions –– for the July 12-17, 2020 SCJ Theological Conference in Cameroon), a commitment to continue the North American Dehonian Retreats, youth ministry (tentative plans for campus ministry in the United States, youth retreats with the Indonesian community in Toronto, and the 2022 World Youth Day in Portugal), and vocation promotion (the entities hope to seek more collaborative efforts regarding vocation development; the Canadian Region recently developed a vocation committee that has a new social media project: “DehonianWay” on Facebook and Instagram).

Click here to read more about the meeting; minutes of the meeting will be sent to North American SCJs in the next two weeks.

The next NORAM councils meeting will take place April 28 in Hales Corners, WI.

On November 14, Fr. Hendrik Ardianto, SCJ, officially moved to South Dakota. Originally from Indonesia, he has spent much of the past year at Sacred Heart Seminary and School of Theology updating his English skills and learning about ministry in the United States.

Among those he joins in ministry on the Lower Brule Pastoral Team is another “Fr. Hendrik”: Fr. Christianus Hendrik, SCJ. Fellow SCJs have nicknamed them “Hendrik the Younger” and “Hendrik the Elder” but to avoid confusion, the younger Fr. Hendrik goes by “Fr. Ardianto” in South Dakota.

During his first two weeks, Fr. Ardianto was introduced to the six parishes ministered to by the pastoral team. He was to begin celebrating Mass at the parishes last weekend, the first Sunday of Advent. But Mother Nature thought otherwise. A snowstorm shut down roads and caused the team to cancel all of the Masses. “Something you quickly learn about ministry in South Dakota, besides the long driving distances: you can’t celebrate Mass with the people if you and the people can’t get to the church,” said Fr. Hendrik (the elder).

“Fr. Ardianto seems to be enjoying his new ministries in South Dakota,” he added. “He has learned to drive on the snowy, icy roads. He has been busy shoveling. He has gone out to do anointing and bring communion to the sick in the hospital. He has been a prayer leader in community and worked with the pastoral team in setting up our schedules. He is quickly learning about ministry in South Dakota.”

“I pretty much enjoy it,” said Fr. Ardianto. “It’s a big challenge for my life, but I like it!”

The new administration for the British-Irish Province has been named: Fr. John Kelly, SCJ, was reappointed to his third term as provincial superior. The SCJs on the council (in order): Fr. James Matthews, Fr. Hugh Hanley, Fr. Robert Mann and Fr. Marian Szalwa. The three-year term begins March 1, 2020.

Br. Yohanes Rasul Suprapto, a member of the Indonesian Province, died on December 3. He was born in 1952 and professed in 1981.

Learning the gift of being present

Fr. Paulin Makiala, SCJ, a member of the DR Congo Province, is currently studying Conflict Studies at St. Paul University in Ottawa. Recently, the SCJ Canada Migration Committee invited him to write about his ministry with the Catholic Immigration Center. The following is paraphrased from the original French:

For the past five months I have been part of a twinning program through the Catholic Immigration Center. It is a program that deals with the social integration and support of newcomers. I am paired with Mr. David and we work with a Burundian family that includes seven children (five boys and two girls). Two of the boys are albinos. It is because of the threats made against the albino children in their homeland that they came to Canada.

I serve as a translator, translating between French and Swahili. Through the center, we help the family in a variety of ways: monitoring the children’s school progress, guiding them in administrative procedures, ensuring that appointments with doctors and other organizations are respected, and accompanying the family in recreational activities. Language is a significant difficulty; the younger children are in school and the parents are enrolled in English classes.

This has been an interesting experience which allows me to move beyond myself and share in the sufferings of others. The program policies do not allow us to give gifts to the family; this helps to make the relationship one of equals. It has been a surprise for me to see their joy in my simple act of presence. It has helped me to understand that there is always something that we can give to bring joy. Joy comes not simply from money or material goods. Sometimes, people simply need someone who will listen to them.

Mail for Good Shepherd parish in Robinsonville, MS, should be addressed to Christ the King parish at:

Also, Frater Huan “Paul” Duy Pham, SCJ, is returning to the Vietnamese District this month after several semesters of study at Sacred Heart Seminary and School of Theology. He will complete his theological studies in Vietnam.

St. Joseph’s Indian School was the focus of a recent article published by South Dakota News Watch. The media outlet did a three-part series regarding public education and Native American children.

“As South Dakota education officials work to close the achievement gap between the state’s Native American students and their white peers, a private school just outside Chamberlain is finding great success with a unique set of programs and support,” wrote Nick Lowrey of SD News Watch. “…The school’s combination of support both inside and outside the classroom, as well as its culturally responsive teaching model, have greatly contributed to the success of its students, according to staff members.”

The article continued: “Some lessons learned from the St. Joseph’s model can be applied elsewhere, including at schools that aren’t as well funded, said Mike Tyrell, president of the school’s board of directors. One of the biggest is that taking the time to build trust between a student and their school and its staff is key to student success; another is encouraging a high level of parental involvement.

“’Students need to be able to trust their environment and if our (students) feel safe in their environment, they can excel in their learning,’ Tyrell said. ‘Education is super important for the Native American kids that we serve, it’s an avenue for success, it’s an avenue for our kids to succeed and live up to their potential. So, it behooves us to do the best we possibly can to educate our kids.’

Click here to read the full article on the SD News Watch website. It is also available on the sites of several South Dakota newspapers.

As noted previously, “This Tender and Loving Mother, Reflections on Mary,” is the focus of this year’s one-minute Advent meditations from the Dehonian Associates office. Sent by email each day during Advent, the reflections come from the writings of Fr. Leo John Dehon.

Fr. John Czyzynski, SCJ, was the presenter at the December First Friday reflection at Sacred Heart Monastery. Members of both the Novitiate and SHM formation communities are pictured together with Fr. John. 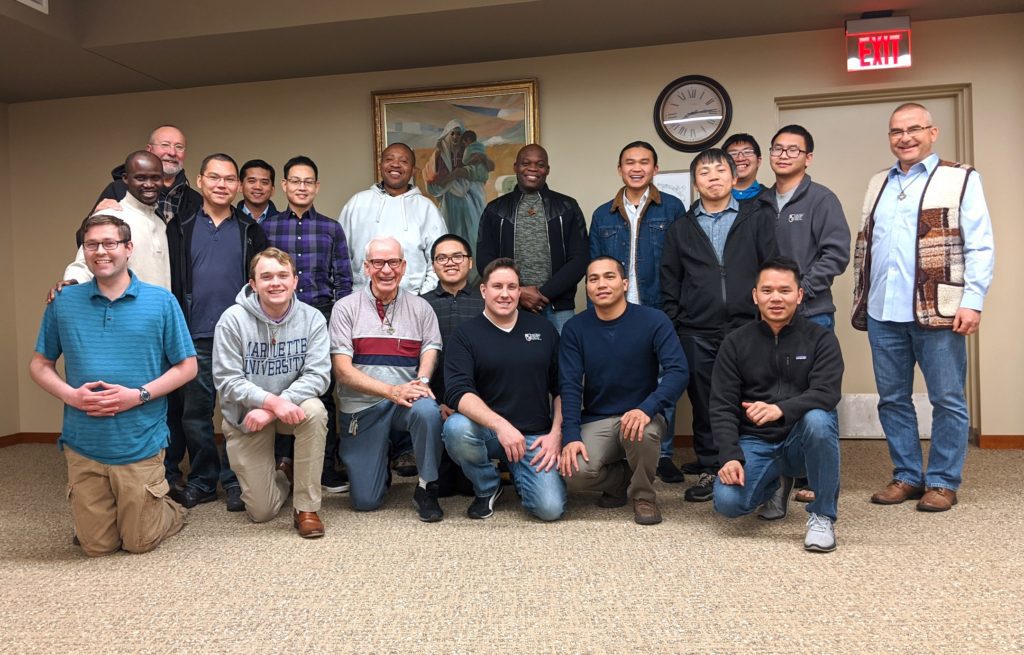