As noted previously, Fr. Wayne Jenkins, province archivist, is working at the Generalate in Rome for several weeks. He recently wrote the following:

“February 2nd is the Feast of the Presentation of the Lord; however, the Church also remembers on this day the consecration of religious men and women.  The Salvatorian community chose this feast day for the missioning of their new generalate.  I was invited to attend.  The ceremony took place in their 17th century historic chapel.  We each received a candle to bring in the procession to the altar where it burned brightly throughout the ceremony.

“Fr. Raul Gomez, SDS, proclaimed the Gospel in English. [Fr. Raul served at Sacred Heart School of Theology for 24 years before being named as vicar general of the Salvatorians last year]

“Spontaneous prayers of the faithful were given in which I also prayed for the Salvatorian professors and students at SHST.

“During the procession of the gifts, the personal globe of Fr. Jordan, Salvatorian founder, representing universality, a picture of Fr. Jordan recalling the spiritual heritage of their SDS charism, the constitutions as a sign of their community life plus mission and the seal of the superior general were presented.  After communion, Fr. Raul was given his copy of the constitutions by their new superior general from Brazil.  For the conclusion of this missioning ceremony, we processed to their founder’s tomb where prayers and songs expressed the hope of everyone for this new administration.

The picture [above] is in their library where we gathered afterwards.  During the banquet I had the privilege of sitting with Fr. Raul and with their superior general.” 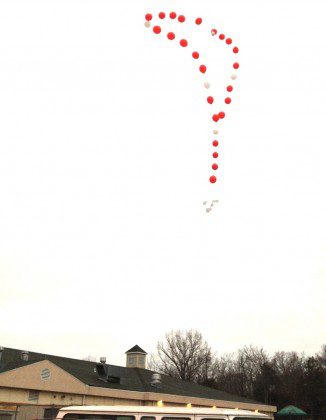 Questioned as to whether PhotoShop helped create the image Steve assures us that no photo-tinkering was involved. “It’s real!” he said

Many thanks to Divine Heart Seminary’s class of 1972 which recently gave a $500 donation to the Priests of the Sacred Heart. Dan Prickel, who organized last year’s reunion, recently the check to us.

We are partners in ministry with our benefactors. The work that the SCJs do in the United States, and around the world, is only possible through the generosity of our donors.

Fr. Tim Gray, a member of the formation team at Dehon House in Chicago, recently wrote a new post for the province blog. Excerpts:

“The end of January saw more erratic Chicago weather as the rest of the community reassembled. Fr. John Czyzynski and the novices, Juan Carlos Castañeda and James Nguyen, spent most of January touring province ministries (in the South, of course!). Frater Fernando Orozco spent January at Our Lady of Guadalupe in Houston, and Br. Clay Diaz returned from his program to begin the spring semester at Catholic Theological Union…

“Our community meals, of course, are an essential element in community life, and most of them are quite entertaining. Although texting and calling during the meal is verboten, most people have their phones at the ready to Google the answers to questions that arise. And questions arise!

“I took some notes during two evening meals, and these were some of the topics that came up:

“Everyone shared his favorite horror movies, and we also compared trips that we had taken. There was a discussion about different styles of chewing, and its effect on teeth. We also discussed different types of relics…

“On the theological front, we had a debate about what the “sensus plenior” of Scripture referred to, and in response to a question about the grammar of “Sursum corda”, Fr. John Czyzynski did some research and assured us that “sursum” was an adverb.

“There were other topics which were discussed, but this is a relative sample of the wisdom and entertainment you will enjoy during a visit to the Chicago formation community.  We have plenty of room and good food and always appreciate visitors.”

Click here to read the full post. Don’t forget, anyone with a connection to the Priests of the Sacred Heart is welcome to write a reflection for the province blog. It need not be long and you need not be an SCJ to submit your writing. Co-workers, parishioners, volunteers and even students in our province schools are all welcome to share their thoughts. Possible topics: an interesting day in ministry, a short profile on a vital staff member, a reflection on a news item in light of the Dehonian charism, or any of a thousand other topics.

A sad change of plans

Last week we wrote that Fr. Jan de Jong would be in San Antonio, taking part in a program at the Oblate School of Theology. Just as he was getting ready to pack his bags he learned that his brother’s cancer was more serious than initially hoped. Fr. Jan cancelled his plans to take part in the program and will go to The Netherlands later this spring to spend time with his family.

You can continue to reach Fr. Jan at the Sacred Heart Community at SHML.

February 18-20 St. Martin of Tours parish is hosting a parish mission. Among the presenters will be Fr. John Czyzynski, province novice master, and Fr. Bob Bossie, retired director of Justice and Peace.

Br. Bortolo Ravelli, a member of the North Italian Province, died January 30. He was born in 1944 and professed in 1960.

Fr. Tom Cassidy will primarily be in the Milwaukee area until the week of February 25. He then heads to Chicago for the Los Jóvenes meeting (meeting of younger members of the province) before leaving for Italy on February 28 for the European major superiors meeting. Held in Albino (northern Italy), the meeting is a continuation of discussions that took place at the European Conference on Secularity in 2011. Be sure to check the province Facebook page and general website for news and photos from the gathering.