On Tuesday, January 4, Fr. Vien Nguyen, SCJ, was elected as the 16th provincial superior of the US Province of the Priests of the Sacred Heart (Dehonians).

“It is humbling to stand in front of you, to carry on the tradition of the US Province,” said Fr. Vien, after acknowledging and thanking the many SCJs who served as formators to him during his years as a candidate and as a professed SCJ, including Br. Peter Mankins, Fr. Stephen Huffstetter, Fr. Rick DiLeo, Fr. John Czyzynski, Fr. Michael Burke, Fr. Guy Blair, Br. Ray Kozuch, and Fr. Jan de Jong.

Fr. Vien, 48, is currently vice rector and assistant professor of Scripture Studies at Sacred Heart Seminary and School of Theology in Hales Corners, WI. He professed his first vows in 1997 and was ordained to the priesthood in 2004. In 2018 he earned a doctorate from the Jesuit School of Theology of Santa Clara University in Berkeley, CA.  He also earned a Th.M, and S.T.L. from Santa Clara University, and an M.Div. from Catholic Theological Union in Chicago.

After the election of the provincial superior, the assembly discerned who could best support Fr. Vien in his ministry, leading the US Province. Fr. Jack Kurps, SCJ, who recruited Fr. Vien when Fr. Jack was province vocation director, was the first to be elected. Fr. Jack made his first profession in 1972 and was ordained to the priesthood in 1977. He is executive director of Sacred Heart Southern Missions, is interim director of the Dehonian Associates Committee, and previously served on the Provincial Council.

Fr. Rafael Querobin was the second SCJ elected. He professed his first vows in 2001 and was ordained to the priesthood in 2007. Originally from Brazil, he now serves on the pastoral team of Our Lady of Guadalupe in Houston. Fr. Rafael is not new to administration; he also served on the Provincial Council of his home province (Brazil – Sao Paulo).

The third SCJ to be elected was Fr. Greg Schill, SCJ. He professed first vows in 2006, and was ordained in 2010. After 10 years in parish ministry in northern Mississippi, Fr. Greg is now chaplain at St. Joseph’s Indian School in South Dakota.

Br. Duane Lemke, was the fourth SCJ to be elected to the US Provincial Council. A previous member of the council, Br. Duane has served in formation and in parish ministry. He is currently superior of the Sacred Heart Monastery Community, province director of Justice, Peace and Reconciliation, and works with the ECS program (English and Cultural Studies) at Sacred Heart Seminary and School of Theology. Originally from South Dakota, Br. Duane literally grew up with the SCJs – he was baptized by an SCJ priest and the SCJs ministered for many years at his home parish.

Dn. David Nagel was the fifth and final SCJ to be elected to the US Provincial Council. He was professed in 1972 and ordained to the diaconate in 2003. Currently provincial treasurer, Dn. David previously served as executive director of St. Joseph’s Indian School and in formation. He has also been active with the Dehonian Associates Committee, has served on the General Finance Commission, and has previously served on the Provincial Council.

The new administration will begin its term on February 2, 2022.

“Please pray for me”

“Please pray for me that I have the ear to listen attentively to the different voices in the province, the eye to see clearly the direction for the province, and the heart to be pastoral and compassionate to all.”

The words were spoken by Fr. Vien Nguyen, SCJ, on January 5, the day after he was elected as the next provincial superior of the US Province. He thanked SCJs, and briefly outlined his concerns and priorities for the future. Fr. Vien reminded his fellow SCJs of the importance of building upon the past, noting the 100th anniversary of the SCJ presence in the United States in 2023. He spoke of the blessings of the present, including the diversity of community life and richness in ministry. Fr. Vien looked toward the future, and spoke of the need to adequately prepare people and ministries for that future.

You can either view Fr. Vien’s address by clicking here or on the image above, or click here to access the written text.

Much took place during assembly week. At the Opening Mass, jubilarians from 2020 and 2022 were honored. Tuesday’s liturgy was a moment to remember and honor the deceased of the province; especially those who passed during the past six-plus years. On Wednesday, Fr. Stephen Huffstetter, SCJ (vicar general), anointed Fr. Ed Kilianski, SCJ, who begins treatment for pancreatic cancer. Many of these moments are caught in photos, or noted in other sources from the week.

– Feature story about the assembly on the US Province website.

– Video shorts (30-45 seconds) of Fr. Vien and each of the new councilors accepting their elections to provincial administration.

– VIDEO of Fr. Vien’s first address to the province.

– TEXT of Vien’s first address to the province.

MANY THANKS to those who assisted with communications during the assembly and on Saturday at Frater Henry Nguyen’s Final Vows Ceremony, including Frater Truc Tran, SCJ, Frater Paul (Phong) Hoang, SCJ and Jenny Drzewiecki (SHSST). Our province video team is in the process of editing a video of the assembly; it should be available for viewing in the next week or so. Thanks to everyone who worked with them during the assembly week!

Congratulations to Frater Henry Nguyen, SCJ, who made his Perpetual Profession of Vows with the Priests of the Sacred Heart on Saturday, January 8.

“For six months I was in the Final Vows program with Fr. Jan de Jong, SCJ (program director),” wrote Frater Henry. “He challenged me, asking me why I wanted to commit myself to being an SCJ for life. I took a deep look at the SCJs’ Rule of Life – our Constitutions – and it renewed my love for our Dehonian spirituality, of living our life as ‘one never-ending Mass’ (Cst 5). Not only are SCJs called to be centered in the Eucharist but they are also called to go out into ministry with the poor, the lowly, and the outcast, just as Jesus did (Cst 18)…

“I give thanks to God for my SCJ confreres, my family, friends, and all those who have supported me on my journey. I am not sure where I’ll be after I graduate from Sacred Heart Seminary and School of Theology this May, but I trust that God will place me where I need to be. I am excited to see what will be in store for me next.”

Frater Henry’s ceremony reflected his own multiculturalism as well as that of the Dehonians. Trilingual, it included parts in Vietnamese, Spanish and English.

Click here or on the image above to view a video of the livestream.

Fr. Chuck Wonch, SCJ, had to leave the Election Assembly last week due to breathing difficulties. He was hospitalized with pneumonia and a kidney infection (he also tested negative for covid). Fr. Chuck has responded well to antibiotics and is tentatively scheduled to be released from the hospital.

+Fr. Paulus Sugino, an Indonesian member of the Madagascar Region, died on December 12. He was born in 1954, professed in 1979 and ordained in 1982. Before serving in Madagascar, Fr. Sugino had been a member of the General Council from 2009-2018, and before that was provincial superior of the Indonesian Province.

+Br. Paul Champion, a member of the Francophone-European Province, he died on December 24. He was born in 1933 and professed in 1955. 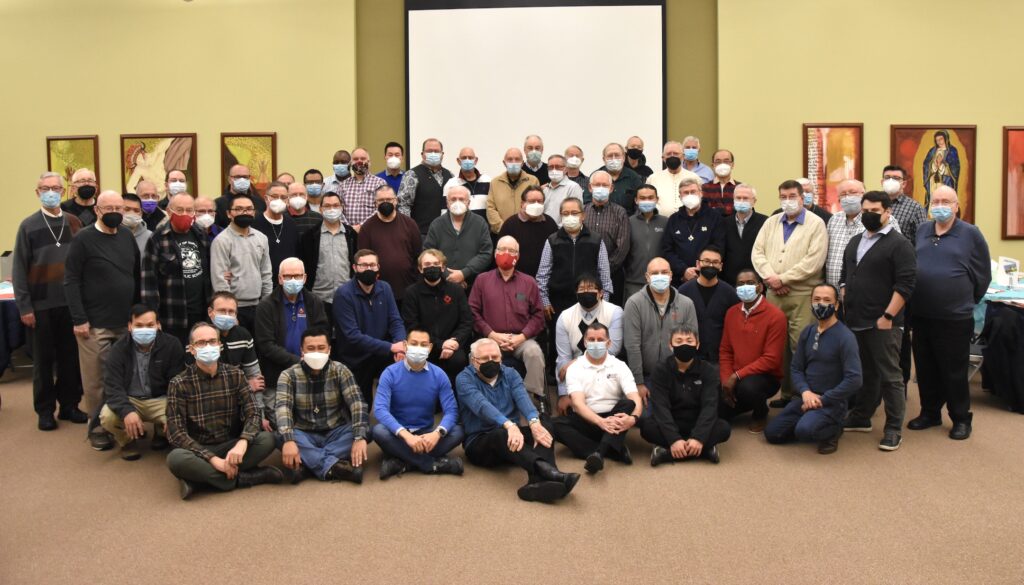