Earlier this month the Dehonian community in Ottawa welcomed a new member from the Indonesian Province: Frater Henrikus Suharyono, SCJ.

“I came to Canada on December 4,” write Fra. Henry, introducing himself. “I am so grateful that my superior gave me the opportunity to have a pastoral year in Canada.”

Of Frater Henry’s class of 15, two were sent outside of Indonesia for their pastoral year. His classmate, Frater Hary, is in the Philippines.

“I was so surprised when I learned that I would be sent to Canada,” wrote Frater Henry. “The day after my final exam (May 28, 2022) my rector [Fr. Kusmaryadi, SCJ –– an alumnus of Sacred Heart Seminary and School of Theology’s ECS program] asked me to see him. He told me that the formators chose me to have a pastoral year abroad. About a month later, he told me that it would be in Canada. I was very surprised because Canada was my dream since junior high school. When I was in junior high school, my friends asked me about a country I wanted to visit. I said that I wanted to visit Canada. I think that I chose Canada because it sounded cool. [Figuratively and literally in the midst of a Canadian winter!] After I learned where I would be sent I texted two friends who knew me in junior high school. I told them that I would do a pastoral year in Canada. They said, ‘OMG, your dream will come true!’ ‘Yup, thanks be to God!’ was my response. As always, God’s plan is surprising.”

The flight to Toronto was his first flight ever. “Fr. Jim picked me up at the airport. He brought me to St. Thomas More Parish,” said Fra. Henry. “I stayed there with Fr. Aegi, Fr. Martin, and Fr. Louis Marie. There, I saw snow for the first time. I was very happy. I also celebrated Christmas and New Year’s there.

“On January 12, I moved to Ottawa. Ottawa has more snow than Toronto! Here I shoveled snow for the first time and I liked it. I have walked through the city and took photos at Parliament Hill. Ottawa is a beautiful city.

“My main goal in Ottawa is to get to know the confreres here and improve my English. Fr. Peter and Fr. John are setting up a program for my English course. After, I’ll return to St. Thomas More to begin my pastoral ministry. I am glad to be in Canada! I ask for prayers so that my process can run smoothly. Thank you very much.” 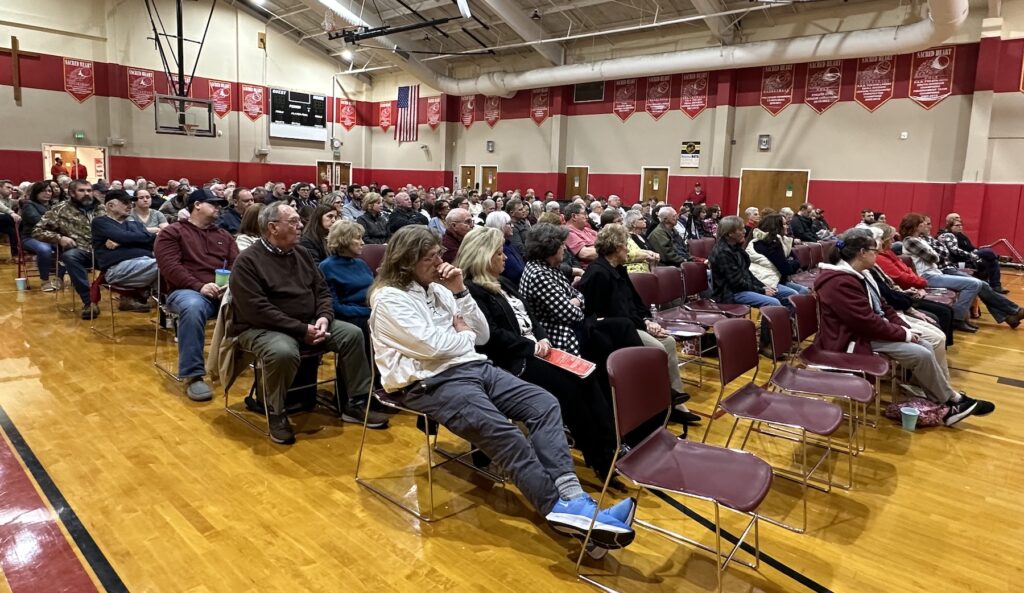 Last week Sacred Heart School in Southaven, MS, hosted the first of a series of evenings titled “Cocktails and Catholicism.” Organizers provided snacks and faith-related discussion; the cocktails (and colas) were BYOB.

“Fr. David Szatkowski, SCJ, and David Delgado were the brains behind the event,” said Laura Grisham, communications director for Sacred Heart Southern Missions. “Others joined them in helping to make it a success…

“When we first started talking about this, the vision was for a small group of parents / adult Catholics to come together and be drawn back into church life through a series of topics. Apparently, there are a great many more who are ‘thirsty’ for this, as what we thought would be a group of maybe 20-30 in the school library for an intimate gathering exploded into nearly 250 in the school gym! Parents, grandparents, teachers, staff, alumni, parishioners from each of our parishes were all there. What a turn out!”

The topic for the first gathering was “The Real Story of Angels and Demons” presented by Fr. David on – most appropriately – Friday the 13th.

Meetings will be held monthly; future topics include: “Can We Eat Alligator on Friday and Other Important Things to Know as You Prepare for Lent,” “What gives you Hope? Jean Valjean’s Life Changed in a Moment,” “The Resurrection: Fulfillment of God’s Promises,” “Sister Says…” with Sr. Margaret Sue Broker, OSF, and “Talking the Talk and Walking the Walk: Evangelizing as a Catholic.”

The Sacred Heart Community at SHML has developed a list of intercessory prayers for migration. Fr. John Czyzynski, SCJ, invites SCJs to rotate them in their local communities and ministries. Click here to access the list.

+Jean McKenna, the mother of Fr. Peter McKenna, SCJ, died on January 16. “My sisters and nieces were with my mother throughout the evening and then this morning my niece Joey was with my mom when she breathed her last breath on Earth,” wrote Fr. Peter to members of the Canadian Region. “I believe that my mom was surrounded by love, and I believe it was this that empowered her to let go and go home to God.” Fr. Peter is a member of the Toronto community.

Why simply being good-hearted is not enough

Fr. Vien Nguyen, SCJ, shares information about a retreat led by Fr. Ron Rolheiser, OMI, both in-person and on-line February 6-9. The full title of the retreat is “Being Disciples of Jesus in Charity, Justice and Prophecy – Why Simply Being Good-Hearted is Not Enough.

Click here to learn more about the retreat and the presenter, as well as registration information.

Four students from the SCJs’ St. Joseph’s Indian School took part in the January 12 State of the Tribes Address to the South Dakota State Senate and House of Representatives. It was delivered by Crow Creek Sioux Tribal Chairman Peter Lengkeek.

“I wanted our students to see firsthand what tribal leadership can do at the state level, beyond the local reservation,” said LaRayne Woster, Lakota Studies Lead. “More importantly, it was an opportunity to put into action what they know about their culture and language. Being able to do so in front of others takes strength and courage.”

One of the students, Eagle Staff Bearer Romeo Roubideaux, escorted the chairman to the podium and stood by his side throughout the address.

Among the topics noted by the chairman was the cooperation that brought funding for the State Attorney General’s Office for a Missing and Murdered Indigenous Persons Coordinator. St. Joseph’s partner organization, Native Hope, announced a three-year grant to fund the position in February 2022. 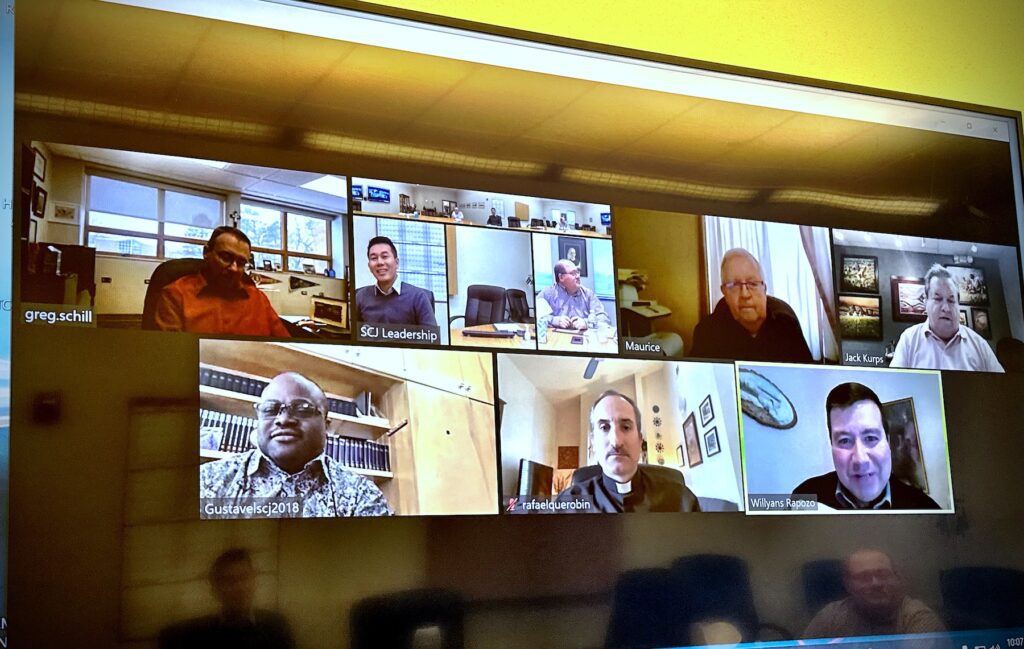 One of many things that was postponed during the initial years of the COVID pandemic was regular gatherings of the administrations of the US Province and Canadian Region. Last week Tuesday, the group held a short meeting via Zoom to raise topics for an in-person meeting on March 28 in Hales Corners. It will be the first time that the two administrations will be together since December, 2019.

Among the topics surfaced for the March meeting: enhancing Dehonian Associates activities in North America, collaboration on vocations, preparation for the 2024 General Chapter, Dehonian Youth (in particular, in preparation for World Youth Day in August), the 100th anniversary of the death of Fr. Dehon in 2025, finding ways to make the Dehonian charism more widely known, the centennial of Dehonian ministry in the United States, and the work of the North American Migration Committee, which was established ten years ago as a response to the North American Congress (the concluding moment of the 2013 General Visitation).