A year of celebration and commemoration!

On March 25, 1923, Fr. Mathias Fohrman, SCJ, celebrated Mass at St. Mary’s Church in Lower Brule, SD.  Although Fr. Mathias had been in the United States since 1919 on a fundraising mission for the German Province, it was not until that Palm Sunday Mass that the Priests of the Sacred Heart (Dehonians) had officially begun their commitment to minister as a religious congregation in the US.

“That might seem to be a rather odd event to celebrate,” wrote Fr. P.J. McGuire, SCJ, in SCJs in the USA, the Early Years, a publication of the Dehon Study Center. “After all, it is not the beginning of our presence in this country, nor is it the official recognition of our status as a distinct province within the Congregation. Instead, it is the commemoration of the day when our religious community began its ministry to the people of this country. That calls attention to the fact that we see ourselves, we understand ourselves as an apostolic community. To be physically present and to be canonically recognized are important, and even crucial, but our identity is wrapped up in mission. We are here to serve, and so we count our days from that first act of ministry when our community began its service in mission to the people of the United States.”

One hundred years later that ministry extends from South Dakota to Wisconsin, Mississippi, Texas, and Florida, reaching across ethnic, social, and economic lines.

Throughout 2023, the Priests of the Sacred Heart will commemorate this centennial year. Details are being finalized, but two significant dates have been set: 1) a province centennial celebration will take place in Hales Corners, starting on July 16, just before the start of the Provincial Chapter, and 2) an anniversary celebration in Lower Brule, SD, will be held on July 30. Details of these and other centennial events will be made available in the weeks ahead.

Fr. Fohrman is pictured above along the banks of the Missouri River following a baptism; it thought to have been taken in approximately 1930. 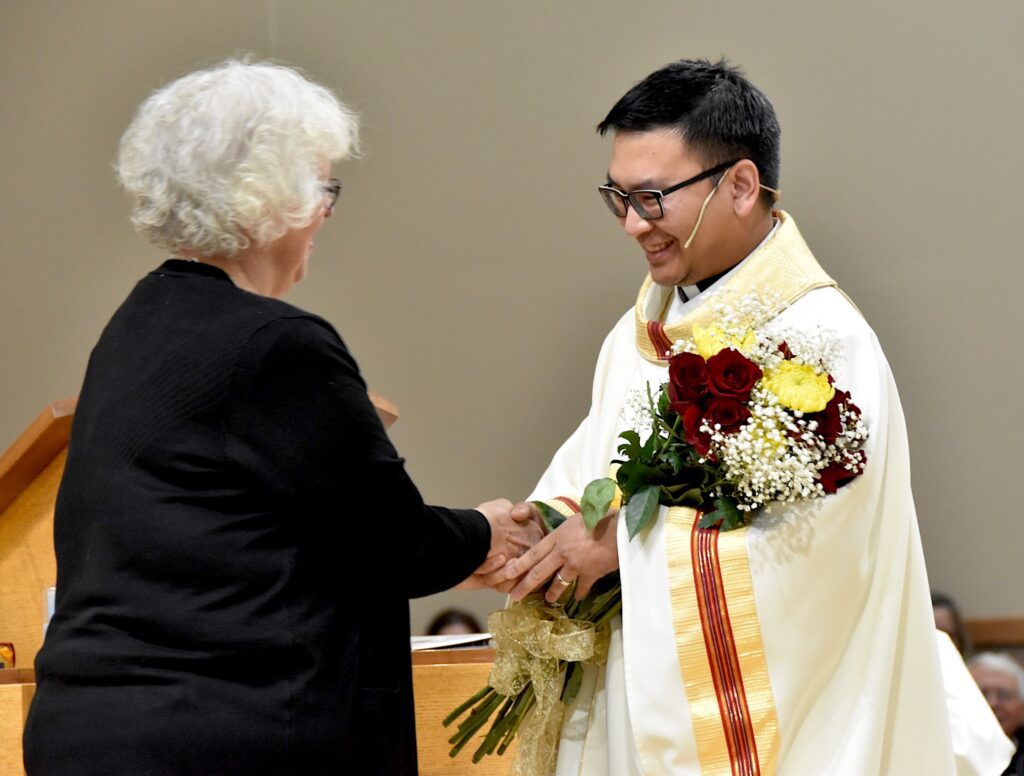 On December 17, Fr. Henry Nguyen, SCJ, was ordained to the priesthood at St. Columban Church in Garden Grove, CA. Between then and now, it has been a busy few weeks, including 3,200 miles of driving. Among his stops on the way back to Wisconsin: several days at SEEK, a gathering for young Catholics in St. Louis. Fr. Henry was there in his new role as vocation director for the US Province. However, besides vocation ministry, Fr. Henry will continue part-time on the pastoral ministry team at St. Martin of Tours (he did his diaconate internship at SMOT). And it was there that he celebrated a Mass of Thanksgiving yesterday, January 8.

Among those in attendance were several former pastors, including SCJ Fathers Tony Russo and Yvon Sheehy, as well as many other SCJs, and representatives from Sacred Heart Seminary and School of Theology.

“Love the people that God has entrusted to you to shepherd,” said Fr. Andrzej Sudol, SCJ, SMOT pastor, to Fr. Henry in his homily. “And always be grateful. Never, NEVER take your vocation for granted. It is a great gift that you received from God. Be always grateful!”

Click here to view photos from yesterday’s Mass of Thanksgiving at St. Martin of Tours (they are also available on the US Province Facebook page). 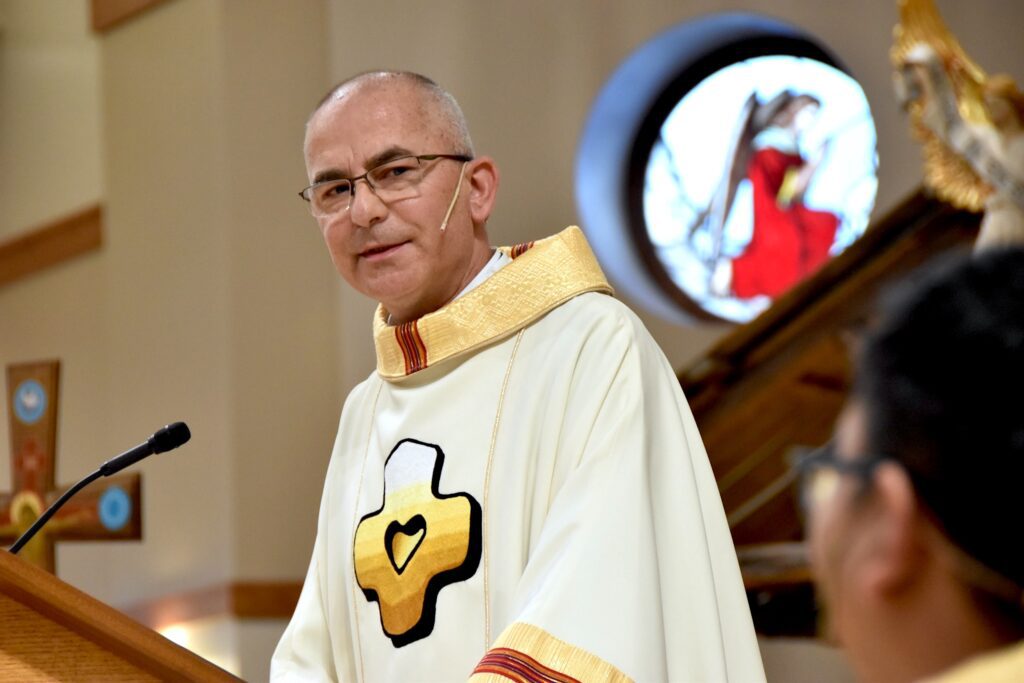 “His words were those of a Dehonian”

During his homily at Fr. Henry Nguyen’s Mass of Thanksgiving at St. Martin of Tours, Fr. Andrzej Sudol reflected on the words of Bishop Thomas Thai Thanh Nguyen, the bishop who ordained Fr. Henry on December 17. “He may not be in vows, but I think that he is a Dehonian,” said Fr. Andrzej of the bishop.

Click here to read the bishop’s full text. Fr. Andrzej is pictured above during his homily, speaking to Fr. Henry. 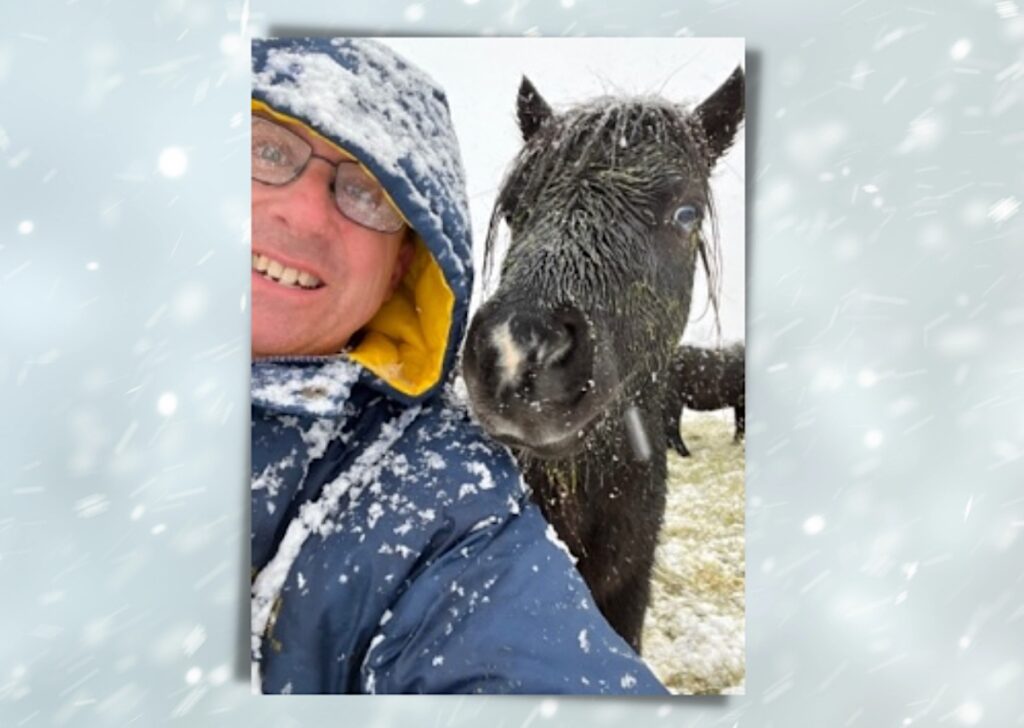 Fr. Greg Schill, SCJ, chaplain at St. Joseph’s Indian School, has begun to sound a lot like a reporter for the Weather Channel. A member of the Provincial Council, at the start of the December meeting he reported that he was lucky to make it to Milwaukee after a South Dakota snowstorm closed St. Joseph’s for an unprecedented four days in a row. The snow also delayed many students from getting home for Christmas break. And once they were on break, they were delayed again: a second storm brought on more snow, cold temps and high winds for the start of the new year.

“The students were supposed to return on Monday [January 2] and begin school on Tuesday,” said Fr. Greg. As of Wednesday, 137 students were still at home, waiting for roads to be plowed. “We hoped to have the majority of students back on campus by the end of the week.”

Fr. Greg also experienced delays, first being stuck in Milwaukee over Christmas, unable to return to South Dakota after the council meetings, and then stuck in South Dakota, unable to visit his family in San Antonio. However, Fr. Greg said that there are always silver linings. In his case, it was the opportunity to take care of the horses which live on campus as a part of the equine therapy program.

“When the weather prohibits the equine therapy staff from getting to St. Joseph’s, I look out for the horses.” As you can see by Fr. Greg’s smile, that’s a stormy weather chore that he enjoys. 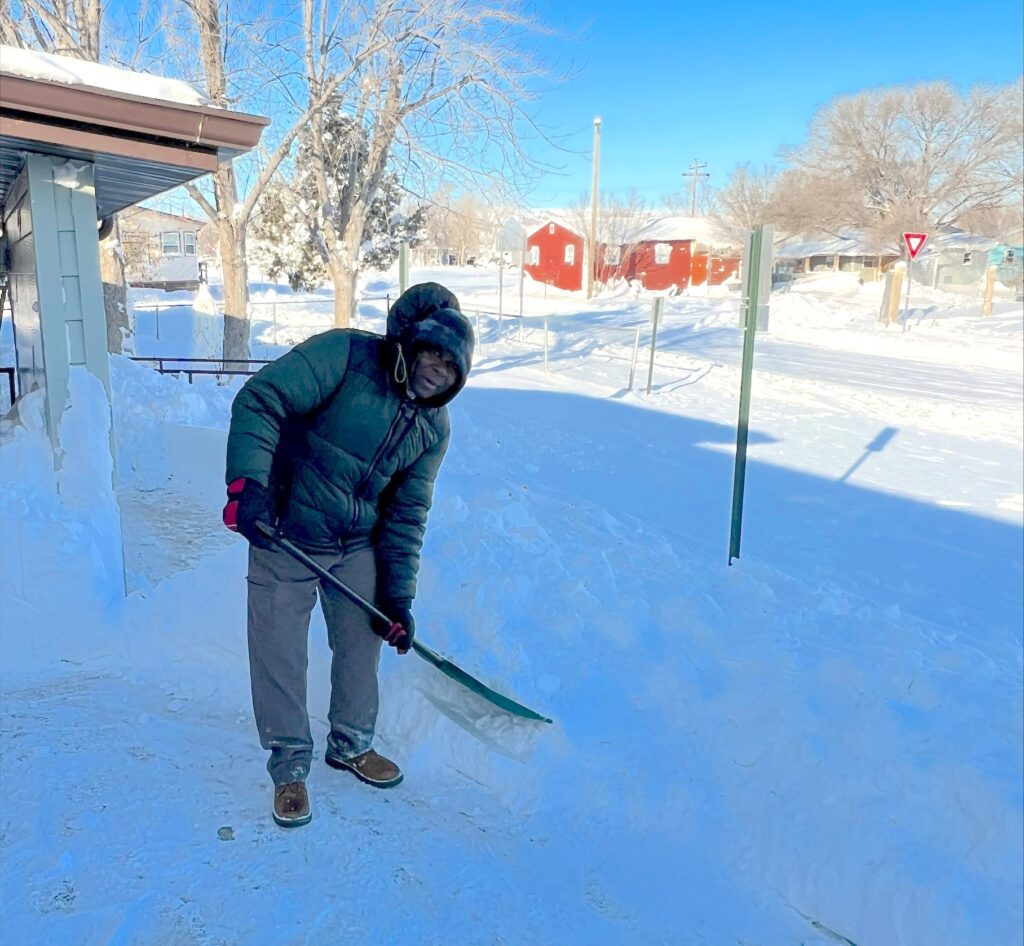 A long way from Cameroon!

St. Joseph’s Indian School certainly wasn’t the only place in South Dakota impacted by holiday storms. Across the Missouri River in Lower Brule, Fr. Jean Claude Mbassi, SCJ, originally from Cameroon, wrote that “In my year and a half here in South Dakota I have never seen anything like this. Last year I was so proud of myself, bragging how I made it through the winter. And now I realize that each winter is unique. Thank God we are safe! We were contained in our homes from Monday night to Friday. There are snow drifts over 10 feet in some areas. It will take a while before we are all plowed out. I shoveled a path to St. Mary’s Church in Lower Brule on Saturday so that we could have Sunday Mass.

“When the streets started to open you could feel the joy of everyone who had been stuck inside their houses for so many days. Even the dogs were happy to get out!

“All things work together for good when there is the love of God. As missionaries, sharing and living this experience of the blizzard with our Native American neighbors, we build the Body of Christ, the Church.”

Fr. Jean Claude is pictured shoveling a path to the church, much as early SCJ missionaries from the German Province did 100 years ago.

“Pope Francis wrote in Evangelium Gaudium that the word ‘solidarity’ is misunderstood and thus misused by many,” wrote Fr. Richard Woodbury, SCJ, in his reflection on Constitutions No. 29 in this month’s issue of As a Rule. “Solidarity is not a sporadic action; it has to lead to a new mentality which thinks in terms of community rather than empowerment for a few. If we wish to pray as Jesus taught us, we must forget about the ‘me, myself and I’ and choose the ‘we, ourselves and us’ that we find in the Our Father.

“The Beatitudes still stand for us as the only and surest and way to follow Christ who has chosen to be poor with the poor from the very beginning of his earthly life.”

In his reflection, Fr. Christianus Hendrik, SCJ, concluded that “Once God sent his Son to be in solidarity with us, the Liberating One now dwells among us, calling upon hearts from all walks of life to open, to take courage, to soften, to release. God takes on flesh and joins life in the struggle – this is what radical solidarity feels like. Lives and souls and bodies entangled. Risks and possibilities shared.

“There is no real solidarity until we turn ourselves into ‘a shepherd that smells like the sheep’ (Pope Francis). We are challenged to be ‘one of them’ in their struggles, feeding them, guiding them, protecting them from dangerous predators, and sometimes from their own stupidity. We must be there when they are injured; and when they are sick, nursing them back to health.”

The latest issue of As a Rule was mailed on January 5. Click here if you missed it. 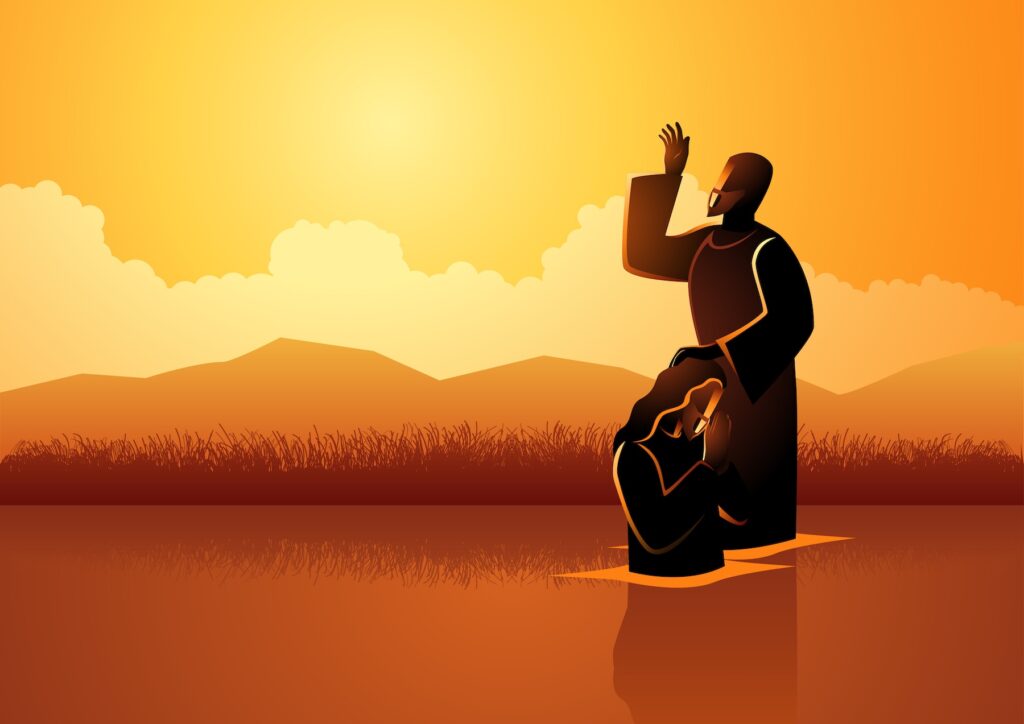 Baptism of the Lord

Today, January 9, the Church commemorates the Baptism of the Lord. The following is excerpted from Fr. Leo John Dehon’s The Year with the Sacred Heart. It is from a reflection the founder wrote that is titled “Baptism of the Savior.”

“In baptism, Jesus offered himself as a victim. His Father appoints him as high priest of the new law. Jesus will exercise his priesthood in his three years of preaching, in the sacrifice on Calvary, and in the Eucharistic sacrifice. He is priest and victim, priest and lamb.  He will approach the altar to immolate himself at the appointed time. His divine Heart has no other goal.

“This is my model: Jesus, humble of Heart; Jesus, victim of love. Jesus expects these acts from me, not only for my salvation, but as a means of the apostolate.”