SHSM’s “Gift in Kind” helps many

Sacred Heart Southern Missions’ “Gift in Kind” program connects donated furniture, appliances and other home items with people in need in northern Mississippi. A few examples of the ministry in action:

– A stove and refrigerator were delivered to a woman in Tate County who, until then, had to keep all of her cooled items frozen because her refrigerator was broken (only the freezer compartment worked) and her stove was lost to a fire.

– An elderly woman on a fixed income who lost everything in her apartment to bedbugs received an apartment full of furniture, dishes, lamps and bedding.

– A disabled couple whose home burned to the ground was able to move into a new rental unit furnished with items from the Gift in Kind program.

– A mother in Olive Branch received beds for each of her three children who previously had none.

– A woman in Tunica whose home was ransacked (walls were stripped down to the studs by vandals!) received repairs made possible in large part by donations of building materials to the Gift in Kind program. Donated furniture and other household items made the restoration complete.

– A young mother of three who had been homeless found work and saved enough money to get an apartment. Gift in Kind donated furnishings, dishes, cookware and other household items to help her start over.

Click here to read more about the Gift in Kind program and the other ministries of Sacred Heart Southern Missions.

The deadline to request a proxy vote for the Election Assembly is this Friday, July 31. Requests must be made in writing (by letter, fax or email) to Fr. Ed Kilianski. Fr. Ed’s email as interim provincial superior is provsup@usprovince.org and his address is: Our Lady of Guadalupe, 2405 Navigation Blvd., Houston, TX 77003. If approved for a proxy vote, paperwork regarding it will be sent via USPS.

Fr. Ed will be at the Provincialate Offices July 27-28; on Monday he takes part in planning meetings for the Election Assembly.

Did you get the email?

Br. Frank Presto, provincial secretary, sent an email about the Election Assembly to members of the US Province last Wednesday, July 22. He reports that he received a few bounce-backs. If you did not receive this email from him, please let Br. Frank know and make sure that he has your correct email address. Click here to email him, or call 414-427-4263.

Fr. Luca Zottoli, a member of the North Italian Province, was named last week as the new general treasurer for the Priests of the Sacred Heart. He is 42, and professed his first vows in 1992. Fr. Luca is currently the superior of the student community in Bologna. His official appointment will come during the General Council’s meetings in September.

Fr. Luca will replace Fr. Aquilino Mielgo Domínguez of the Spanish Province, who completes his second term this year.

Fr. Luca is pictured at right speaking during the European Major Superiors Conference in Albino, Italy, in 2013.

Br. Luc Coursol of the Canadian Region has a new email address: lcoursol4@outlook.com

Fr. Bob Bossie asks for your continued prayers for his brother Richard, Richard’s wife Claudia and his medical team. Richard suffered a heart attack after being admitted to the hospital for severe COPD. He now remains in ICU due to further complications. Once he is stabilized he must still undergo heart surgery.

Br. Long Nguyen writes “Many thanks to the SCJs and others for their prayers and support while my family dealt with my dad’s declining health and death.”

On July 23, Br. Vermont Kifack Bengourion Zebaze received news that he was admitted to perpetual vows by the Provincial Council of the Cameroon Province. Br. Vermont is currently a member of the SCJ community in Montréal where he is receiving medical treatment for a knee injury. The celebration of Br. Vermont’s perpetual vows will take place during Canada’s regional assembly on August 12. Anniversaries of the region will also be celebrated at that time.

Fr. Christopher Klusman, an alumnus of Sacred Heart Seminary and School of Theology and one of only a handful of deaf priests in the United States, will teach a course on American Sign Language and deaf culture at SHSST this fall. The class is open to the public.

This is the first time a course like this, with a focus on ministry, has been offered in the Milwaukee Archdiocese, according to Fr. Klusman.

“This is a comprehensive course, incorporating many facets such as American Sign Language, deaf culture, ministry with the deaf, and related topics,” he said.

Fr. Klusman, deaf since birth, is the associate director of the Deaf/Hard of Hearing Ministry for the archdiocese.

“Anyone who wants to be more effective in their relationships with the deaf – be it a pastoral associate, another parish employee, a volunteer or a friend – will benefit tremendously from this class. Part of the job of being Catholic is to reach out to those who face isolation, or who need help to fully participate in society, and that certainly includes deaf people,” Fr. Klusman said.

The class can be taken on an audit basis, or for two college credits. Tuition is $550 to audit and $1,100 for two credits. The class will meet for two hours on Thursday evenings Sept. 3 through Dec. 10. Click here for registration information.

Our thanks to SHSST for the information and photo.

On exhibit in Ste. Marie

Several SCJs, including Fr. Wayne Jenkins, province archivist, went to Ste. Marie, Ill., this weekend to attend the opening of “Amazing Grace: 1837 to Now,” the newest exhibit of the Ste. Marie Foundation. Featured in the display is an extensive section on the SCJs’ presence in the town, including the novitiate that served the US and Canada until 1972.

Frater Justin Krenke sent a few photos, noting that one is of the SCJs (including Fr. Joseph and Fr. Patrick from the summer ESL program) with staff from the Ste. Marie Foundation at St. Mary’s Church. “For the first time Fr. Wayne celebrated Mass at the church where he professed his first vows,” said Justin. The second photo is of the SCJ display at the Amazing Grace exhibit. 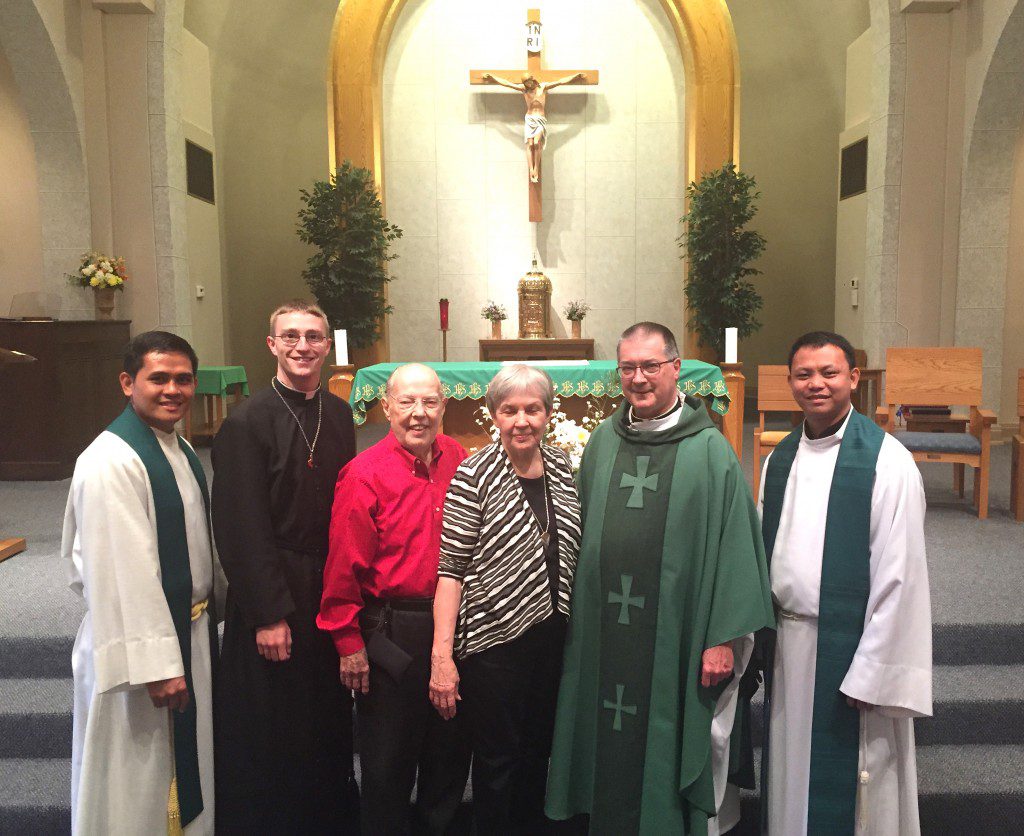 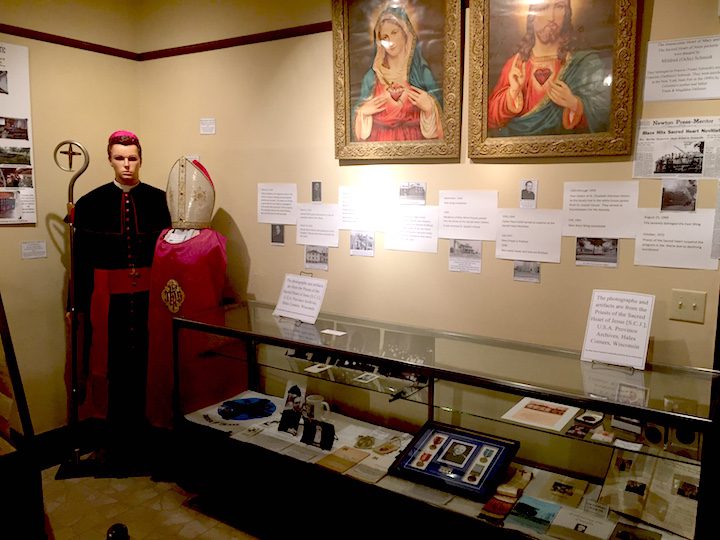