Congratulations to Fraters Henry Nguyen, SCJ, and Hubert Liassidji, SCJ, who renewed their vows with the Priests of the Sacred Heart (Dehonians) during Friday’s Sacred Heart celebration at Christ the King church in Southaven, MS. Bishop Joseph Kopacz joined Dehonians for the Mass. Click here to view photos on Facebook. Fraters Henry and Hubert are picture above with Fr. David Szatkowski, SCJ, who was delegated by Fr. Ed Kilianski, SCJ, to receive the vows.

As local communities around the province prepared to celebrate feast of the Sacred Heart in the midst of a pandemic, the SCJ community in South Dakota grappled more so than most with how to be together, separately.

“The regional community in South Dakota is under some duress,” wrote Fr. Bernie Rosinski, SCJ. Fr. Bernie lives at the SCJ residence at St. Joseph’s Indian School in Chamberlain, SD. “Fort Thompson is in Buffalo County and that county currently has about 30 active cases of COVID-19, located largely in Fort Thompson itself.

“Fr. Christianus Hendrik, SCJ, our local superior, as well as pastor at Fort Thompson, seeks to prevent contagion among our full SCJ community in South Dakota. Because of this, he has decided to self-quarantine to avoid contact with other SCJs…

“But, we still need to commemorate the feast of the Sacred Heart.

“In the spirit of Fr. Dehon and the Dehonian charism, Frs. Hendrik and Mark planned to celebrate the feast day by having Adoration of the Blessed Sacrament during which they will renew their vows of poverty, chastity and obedience as is done traditionally throughout the Congregation. Concelebration of the Mass is not possible at this time at the recommendation of the bishop of the diocese. So, each priest will celebrate Mass individually.”

Feast of the Sacred Heart separately, but together. Click here to read more. 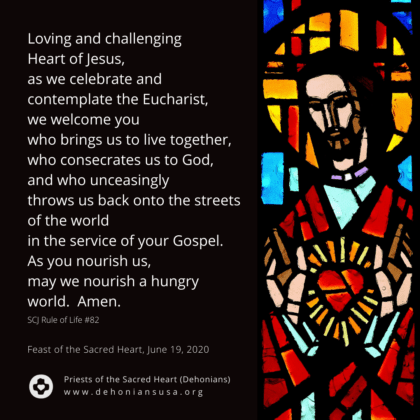 Reflections on the Sacred Heart

Fr. Ed Kilianski, SCJ, was the presider and homilist at the feast-day Mass at Sacred Heart at Monastery Lake.

“This year, as we celebrate the Solemnity of the Sacred Heart in a time of darkness and uncertainty, we listen to the invitation of Jesus: ‘Come to me, all you who are burdened. Take my yoke upon you and learn from me, for I am meek and humble of heart.’  Perhaps for the first time in our lives we do not need to search for the suffering that we hold in common across the world. It feels like a heavy yoke has fallen upon the shoulders of all of us and particularly on the shoulders of the most vulnerable – the poor, all victims of racism, migrants, the elderly and perhaps others…

“Now, COVID-19 and the state of our world shouts to us to be attentive to this moment in history.  I ask you today, on this solemnity, to live more humanly in the way Jesus lived, to be One Body in closer solidarity with each other. This is the opportunity to put real flesh on our commitment, an opportunity to change the way we look at the world, to ask ourselves how can we as Dehonians or as lay people respond in new ways to live in solidarity with each other and with those who are most suffering.”

As a part of the Canadian feast-day celebration, Fr. John van den Hengel, SCJ, shared a written text based on his research regarding the theology of the Heart of Christ that was done for November, 2019, Sacred Heart Congress in Rome.

“What can we say about the Sacred Heart in the midst of a civilizational crisis caused by a virus, when disease and death are all around us, and when like the disciples after the death of Jesus we are huddled inside in fear?” wrote Fr. John. “Their crisis was the lifeless body of Jesus hanging on a cross, its side pierced by a lance. We can still hear the crisis in the voices of the two disciples fleeing from the place of death: ‘But we had hoped…’ We had hoped that he was the one to redeem Israel, that he would get us out of the impasse of a life that seemed to go nowhere. But it was not to be. Their hopes were dashed – another false lead! – and they were returning home.

“Isn’t that our situation as well? We have now been in our upper rooms at 192 Daly, 58 High Park, Blvd Gouin, 1 Darlington, the Séminaire, Square Angus and Frère André for more than three months and death is still all around us. We can’t, like the two disciples, just leave the place of death and return to a safe home and leave all of this behind us. We feel that we cannot let up our vigilance because the virus will only pursue us…

Also, Br. Diego Diaz, SCJ, prepared a reflection in Spanish titled “A medidas extremas, Mas Amor al extremo” [To Extreme Measures, More Love to the Extreme]. In it, he writes about the “extreme” love of the Sacred Heart as the base from which humanity can respond to the pandemic.

Novice Thien Nguyen’s youngest brother, Paul, died June 18 in a truck accident on the family farm in Vietnam. He was 24. Please keep the family in your prayers.

Congratulations to Bishop José Ornelas Carvalho, SCJ, bishop of Setúbal, who was recently elected as President of the Portuguese Episcopal Conference. Bishop Ornelas was superior general of the Priests of the Sacred Heart (Dehonians) from 2003-2015. Pope Francis appointed him as bishop of Setúbal on August 24, 2015. Originally from the island of Madeira (Portugal), he was born in 1954, professed in 1972, and ordained to the priesthood in 1981. Prior to his election as Superior General he was Provincial Superior of the Portuguese Province.

Fr. Anthony Purwono, SCJ, has been named by the General Administration as Procurator of the Congregation to the Holy See; he succeeds Fr. Célson Altenhoffen, SCJ. Until now, he served as Vice General Secretary. Many SCJs in North America may remember Fr. Anthony (Antonius) from his years of study in the Canadian Region.

Another hat added to his collection

Earlier this year Fr. Vien Nguyen, SCJ, was named as Vice Rector of Sacred Heart Seminary and School of Theology for the upcoming academic year. Fr. Raúl Gómez-Ruiz, SDS, SHSST president-rector, announced last week that Fr. Vien has also agreed to serve as the Interim Vice President of Formation Programs. Dn. Steve Kramer will assist Fr. Vien with administrative duties. Fr. Vien will attend to the role as the seminary continues to search for a permanent Vice President of Formation Programs.

Due to the travel challenges imposed by the pandemic, the General Visitation of the US Province by Fr. Carlos Luis Suarez Codorniú, SCJ, Superior General, and Fr. Stephen Huffstetter, SCJ, Vicar General, has been indefinitely postponed. It was to have taken place from August 29 through September 19, 2020.

Fr. Ed Zemlik, SCJ, thanks SCJs and co-workers for the many cards, phone calls, text messages and prayers received in the wake of the death of his nephew, Daniel Michael Zemlik. “The messages and prayers were a significant source of comfort and support to me and my family.”

“In the midst of the earthly paradise, says Genesis, there is the tree of life.  At the center of the heavenly paradise, says Revelation, there is also a tree of life.  It is the Lamb, it is the Sacred Heart, which is the tree of life in heaven.  It grows on both banks of the river and it gives various fruit following the twelve months of the year, that is to say for the blessed, there will be a perpetual renovation of their immortal bliss.” The quotation is from Fr. Leo John Dehon in Studies on the Sacred Heart of Jesus, Chapter Two. It was today’s meditation from “Sketching in Nature, the Work of the Sacred Heart.”

As noted previously, during the month of June the US Province Dehonian Associates Offices is sending (via email) daily one-minute meditations from the founder’s writings that focus on how the natural world reflects the work of the Heart of Jesus. 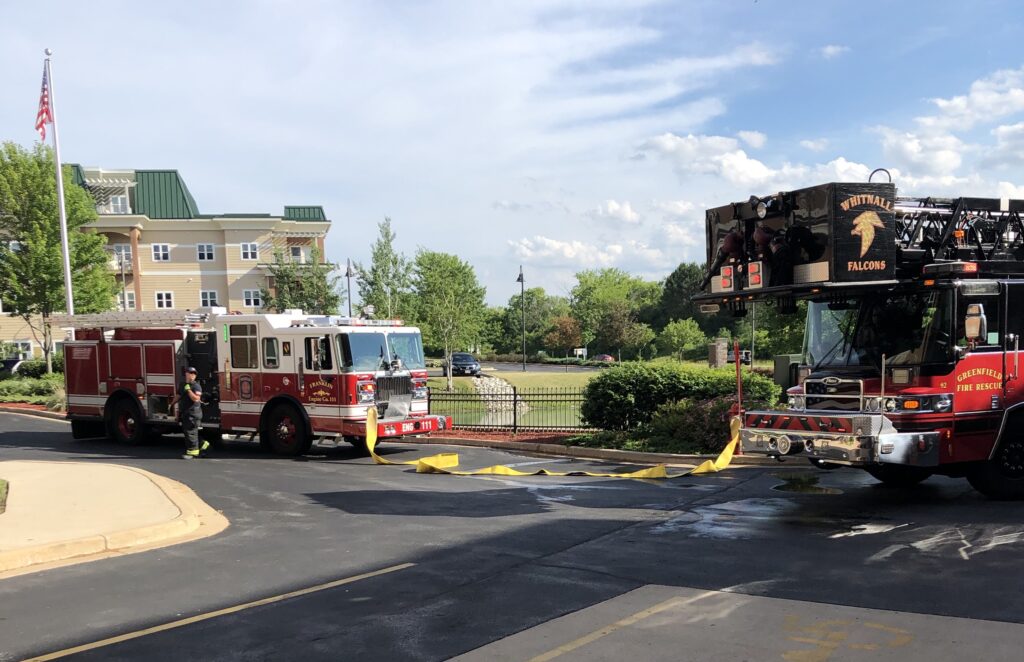 A bit of social hour excitement

Just as the SCJ community at Sacred Heart at Monastery Lake was settling down to its Sunday social hour, the fire alarms sent them, as well as residents in the rental wings, out to the parking lot. Approximately five police trucks quickly made their way to the property to investigate the alarm while residents waited outside. The source? A smoky kitchen from a resident cooking dinner in the rental wing.

“On the bright side,” said Fr. Ed Kilianski, who shared the photo above, “we got to see some of the people we don’t get to visit with too often in the midst of social distancing.”

A bit of miscommunication led to Dn. David Nagel’s door being forcibly opened as firefighters investigated the property, but otherwise there was no damage.