It was a quick Provincial Chapter – only a few hours on Monday afternoon, June 18. Its primary task was to elect delegates from the US Province to the General Chapter in Rome, July 14-27. Of course, the need for a General Chapter was the result of Pope Francis naming Fr. Heiner Wilmer, SCJ, former superior general, as bishop of Hildeshiem. The congregation will elect a new general administration at the General Chapter.

Following the elections, the chapter reviewed several proposals for possible submission as topics for the General Chapter, including the establishment of an international commission on migration, the creation of an ad hoc committee to review the reality of some candidates doing initial formation outside of their place of origin, and the desire for newer entities to develop plans for spreading the Dehonian charism and for financial self-sufficiency.

Before closing, Chapter delegates endorsed a letter urging President Donald Trump to use executive authority to change the policy of separating children from families attempting to enter the United States. The letter was to be sent to Attorney General Jeff Sessions, Senate Majority Leader Mitch McConnell and Speaker of the House Paul Ryan. A news release containing the letter was to be sent to newspapers in the areas in which the province ministers.

Pictures: click here to view an online photo album from the Provincial Chapter. 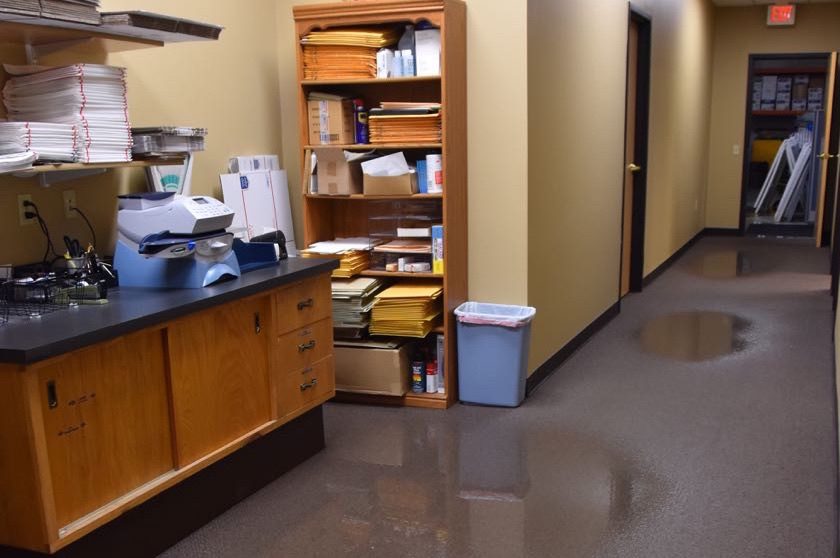 The chapter concluded its business in the midst of a flood! As the last chapter session came to a close, epic rains made their way into the meeting hall and Provincial Offices. As the water-removing machinery was brought in, SCJs moved across the street for closing Mass at Sacred Heart at Monastery Lake. A week later, the fans are still going, baseboards of the affected areas have been removed and much of Kevin Stanke’s office is stacked in the hallway. Last Monday’s office puddles are pictured above.

“I promise I will work hard to be your pastor,” said Fr. Ed Kilianski, SCJ, as he brought the US Province Election Assembly to a close last Wednesday.

Held June 19-20, at the (slightly damp) Provincial Conference Center, the primary task of the gathering was to elect a new provincial administration. By the end of the first day, Fr. Ed was elected to a second term as provincial superior, and Fr. Quang Nguyen, SCJ, and Fr. Jack Kurps, SCJ, were re-elected as councilors. The rest of the council was elected the second day: Fr. Christianus Hendrick, SCJ (he also served during Fr. Ed’s first term), Fr. Vien Nguyen, SCJ (he was on council during Fr. Tom Cassidy’s administration) and Br. Andy Gancarczyk, SCJ. Originally from Poland, this is Br. Andy’s first experience in provincial administration.

“You are family to me,” continued Fr. Ed in his closing words to fellow SCJs. “You are very special men doing good ministry. When I was pastor at Our Lady of Guadalupe I told parishioners that every night I prayed for them.

“Now, every single night before I go to sleep I pray for each and every one of you. If we do not pray, we are nothing more than businessmen trying to do business. We are about spreading the gospel, the kingdom of God, the love of the Sacred Heart of Jesus. We have a mission that is very valuable in the Church; we have a charism that speaks to the need for healing and reconciliation in our country and world.”

PHOTOS: Click here to view an online photo album from the US Election Assembly.

Remembering those who went before us

The closing Mass of the assembly was a Mass of Remembrance, remembering all the deceased of the province, but in a special way, the 14 members of the US Province who had died since the last Provincial Chapter in 2014.

“Some of them may have been close friends, or classmates, or mentors,” said Fr. Jack Kurps, SCJ, in his homily. “Some may have acted as role models or played a significant role in your life. Perhaps you had harsh words or a difficult experience with one or the other. And perhaps some, you didn’t know at all.

“We remember each of them because they are our brothers – brothers who shared more than just the three letters after our names: SCJ. We are WHO we are today because of the lives of those who have gone before us. They are the foundation for our future and, as Dehon wrote, they are our best endowment.

“Each of them – and each of us – are united in faith, united in a common purpose. Together, as sons of Leo Dehon, we desire to help others experience the same love and mercy of the Sacred Heart that we ourselves have experienced.”

From Wilkes-Barre, PA, Fr. Tom’s first assignment was at Immaculate Heart of Mary Seminary in Lenox, MA. He was there from 1966-1979. After a year at St. Joseph’s High School in Alameda, CA, Fr. Tom took his first parish assignment at St. Matthew parish in Houston where he served for 1983-86.

He then joined the Mississippi community serving at Queen of Peace parish in Olive Branch from 1986-1993 and at St. James parish in Corinth from 1993-2009.

He retired several years ago and was a member of the Sacred Heart Community in Pinellas Park, FL.

Fr. Johnny Klingler, SCJ, has been hospitalized for various tests. Although he has had some setbacks, so far, it looks as though his cancer has not spread. Please continue to keep him and his caregivers in prayer.

At the start of the Election Assembly, Fr. Ed Kilianski, SCJ, shared a few decisions from the previous evening’s Provincial Council meeting.

With Fr. Francois Tsanga, SCJ, moving to Houston to serve as administrator of Our Lady of Guadalupe, there is a need for more personnel in Mississippi, especially for ministry to the Spanish-speaking. Fr. David Szatkowski, SCJ, has been assigned to the pastoral team in northern Mississippi, as of July.

Replacing Fr. David on the formation team will be Fr. Tom Cassidy, SCJ; he is assigned to Sacred Heart Monastery as of July 1 for one year. Fr. Kilianski thanked both men for their availability to the province’s needs.

Also, please note that Fr. Bob Bossie will have a new address as of July 1:

The e-publication Dehonian Spirituality, produced by the Dehonian Associates Office, will take a break during the month of July. An issue will be sent this Friday, June 29; the next issue will be on August 3. 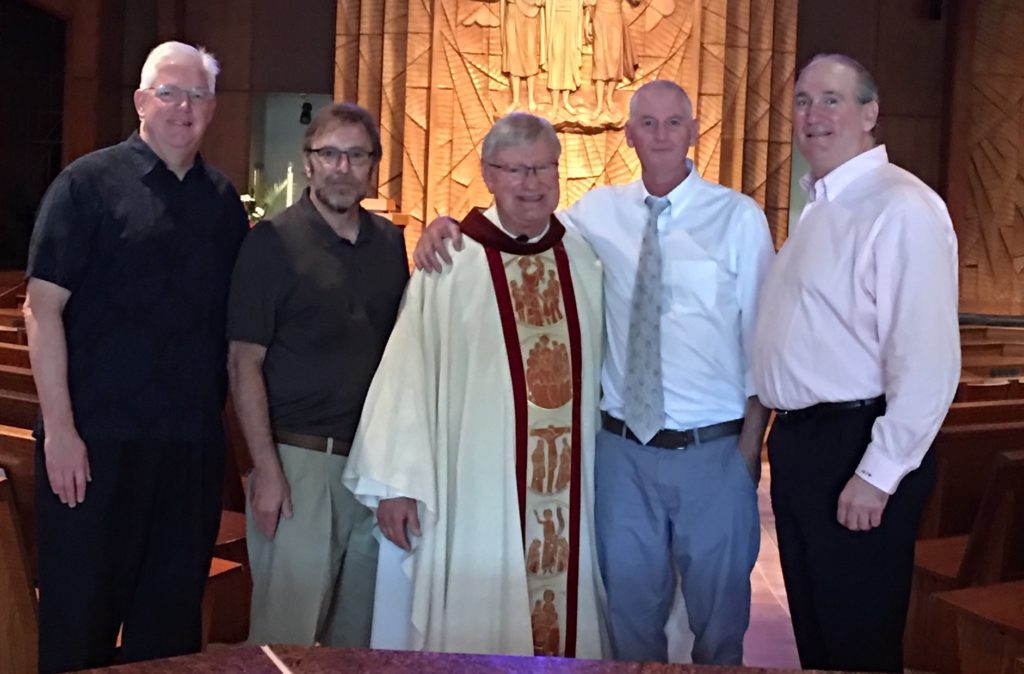 Mike Shuler (alumnus of the province’s former Immaculate Heart of Mary Seminary in Bellfontaine) shares the photo above from the celebration of the 40th anniversary of priesthood of Fr. Jim Walters, SCJ. It took place over the weekend at Fr. Jim’s home parish of St Joseph in York, PA. Mike writes that “Fr. Jim is pictured with Ray Horan (Class of 77), myself, Bill Anderson (77), and Mike Wilson (who would have graduated in 77).”

Fr. Ed Kilianski, SCJ, was in Buffalo over the weekend to attend his nephew’s graduation and spend time with family; he returns mid-week. July 11 he leaves for Rome to take part in the General Chapter; the chapter runs through July 27.

Delegates, staff and observers at the US Election Assembly: