Last Monday Paul (Phong) Hoang and Henry Nguyen were received into postulancy by Fr. Ed Kilianski during Eucharist at the Dehon Formation Community in Chicago. Fr. Andrzej Sudol is their postulancy director. Click here to view a few photos from the ceremony taken by Frater Joseph Vu.

Tomorrow, March 14, is the 174th anniversary of the birth of Fr. Leo John Dehon, founder of the Priests of the Sacred Heart. Throughout the world March 14 is celebrated as “Founder’s Day.” It is a time not only to commemorate the birth of Fr. Dehon, but also to celebrate the vocations of all who feel called to the Dehonian charism, including members of the Priests of the Sacred Heart as well as lay and consecrated people who are a part of the wider “Dehonian Family.”

“The Founder’s spirituality has served as one of the guiding principles in my ministry of vocation,” wrote Fr. Quang Nguyen, province vocation director, in a 2015 reflection for Dehonian Spirituality. “There are times that I have been discouraged to say the least, especially when a potential candidate has ‘discerned out’ after a long discernment with us. Personally, I would like them to ‘discern in’ with us; I want to ‘push’ them forward because I believe that they could be a wonderful addition to our congregation. However, ‘I can say nothing else except my fiat.’

“Fr. Dehon’s fidelity and faithfulness to the will of God has taught me an important lesson. Even when things do not go according to my liking, God is still at work. I need to do my part; God will take care of the rest.”

Last week we posted a link to the superior general’s March 14th letter. If you missed it, click here to access it.

Also, the North American Migration Committee prepared a prayer service to commemorate Founder’s Day. Click here to access a PDF of the service.

This morning Fr. John Czyzynski spoke to staff at the Province Development Office about Fr. Leo John Dehon as a part of the office’s Founder’s Day commemoration.

He noted that Fr. Dehon sought to establish a religious order with a focus on Adoration of the Blessed Sacrament “but this evolved into a call to social outreach based in the love of the Sacred Heart.” It was a call so deeply embraced by the founder that Pope Leo XIII personally asked Fr. Dehon to “be his mouthpiece on social justice issues, to teach his groundbreaking encyclical ‘Rerum novarum’ (The Condition of Labor).”

Fr. John went on to describe the founder as someone who fully committed himself to the service of God’s will, who was compassionate toward others.

“He wasn’t a ‘Plaster of Paris’ saint,” said Fr. John, “but a real person just like us with real struggles. Yet his life was always based in an incredible love for others.”

On March 28 the Lux Center for Catholic-Jewish Studies at Sacred Heart Seminary and School of Theology will host a public lecture titled “Building Bridges through Interreligious Dialogue in our Multi-Faith World.” Television journalist Mark Siegrist will moderate a dialogue between Fr. John Crossin, former director of the Secretariat for Ecumenical and Interreligous Affairs for the US Conference of Catholic Bishops, and Rabbi Yehiel Poupko, rabbinic scholar at the Jewish United Fund / Jewish Federation of Metropolitan Chicago.

Admission is free, but registration is required by March 21. Click here for more information. The lecture begins at 7 p.m. 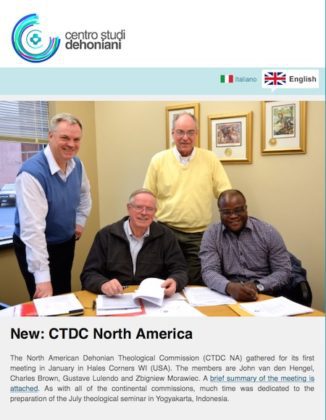 Among the topics featured in the recently published newsletter of the Centro Studi Dehoniani in Rome is the newly developed North American Dehonian Theological Commission.

“We discussed at length what we are referring to with the word ‘devotion’ in the Dehonian worldview,” wrote Fr. Charles Brown in his summary of the commission’s first meeting, much of which focused on preparation for the congregation’s theological seminar in Yogyakarta, Indonesia in July. “As a way of setting a defining direction, we worked with this definition: Devotion is the expression of that which attracts our hearts, what touches our hearts and souls with respect to our faith in Christ through our life and ministry as Dehonians.”

Fr. Claude Bédard was admitted to a Montréal hospital yesterday for a gall bladder infection and gallstones.

Fr. Johnny Klingler and Fr. Chuck Wonch both had hernia surgeries. Fr. Johnny’s was last week and he is now recovering at home. Fr. Chuck’s was this morning and he is said to be doing well.

On March 6, four SCJs and Mark Peters, US Province JPR director, went to Speaker of the House Paul Ryan’s office in Racine to share their concerns about the Trump administration’s executive order on immigration. Sacred Heart at Monastery Lake is within Speaker Ryan’s district and thus the SCJs meeting with him aren’t just concerned citizens, they are also his constituents.

“Five of us made a Lenten prayer together, giving testimony about Jesus’ command to ‘love one another’ as we campaigned for compassion for those who come to our country in need,” said Fr. Tony Russo, one of the SCJs who took part in the meeting.

Hearing the stories of migrants

Eva talked about coming to the United States to get medical treatment for her son, who had been badly burned and needed a skin graft. She had heard that such treatment was free at Shriners Hospitals for Children.

“Her husband [already in the United States] arranged for ‘coyotes’ to lead them to the U.S.,” wrote Mark Peters on the JPR blog.  “Eva and their four boys (5, 6, 12 and 15 years old) walked through the night, hid, and did what they had to do to make it across. She said it was so difficult that ‘if I ever knew what I’d have to go through, I would never had tried it!’”

The family’s challenges continued; her husband was deported in 2008 and the family has not seen him since.

Eva said that the most important thing that the Church can do for the undocumented is to “let us come to your parishes to tell our stories.”

Click here to read more about the migrants who shared their stories with SCJs last week.

Last week the European Major Superiors met in Folignio, Italy. Discussion topics included migration in Europe, volunteer programs for the laity (and how they can be a part of vocation ministry), collaborative formation, and possible international projects in areas such as London, Paris, Bassel (Germany), Amsterdam and Eastern Europe.

Several reports and photos are available in English and Italian on the congregational website as well as on the DehoniansWorldwide Facebook page.

Fr. Ed Kilianski will take part in the Local Superiors meeting and workshop on March 13-14 (beginning with dinner and an evening program on March 13 and continuing for a full day on March 14), and the Provincial Council meeting on March 15. March 17-21 he will be in California, where he will meet with Fr. Vien Nguyen, who is completing his doctoral studies.

March 22 he has meetings with the Board of Directors of Sacred Heart Seminary and School of Theology.

His next visitation is in Texas April 6-17.