A return to South Africa

For several weeks this spring, Fr. Charles Brown, SCJ, has been in South Africa delivering a variety of presentations: first at the sabbatical program sponsored by the Southern African Catholic Bishops’ Conference (the SACBC includes Namibia, Zimbabwe, Lesotho, Swaziland ––  the name of which recently changed to “Eswatini” –– and South Africa), and second, leading a Lenten retreat for SCJs in the South African Province.

“The Sabbatical Programme for Priests and Religious is held every other year,” wrote Fr. Charles. “I have worked in the program since the mid-2000s.  Bishop Joseph Potocnak, SCJ, was one of the founders of the program. Pre-pandemic, Fr. Charles also was a presenter and retreat facilitator with the South African Province, and for several years taught at the St. Joseph Theological Institute in Cedara, South Africa.

“The title of my [retreat] conferences here is not new; content-wise, it has grown: ‘St. Paul and Our Dehonian Life,’” wrote Fr. Charles.  “We, Dehonians on retreat, had some marvelous exchanges, not always easy, but always deeply fraternal.”

Fr. Charles noted the many people in South Africa who knew Fr. Johnny Klingler, SCJ. Fr. Johnny had ministered there for a year, and many also knew him from his time on General Council. A Mass was held in South Africa for Fr. Johnny on the same day as his funeral in Wisconsin. Next Saturday, the province will commemorate Fr. Karl-Heinz Ofenloch, SCJ, a member of the province –– originally from Germany –– who died. The funeral will take place in Aliwal North, so Fr. Charlie will have a chance to visit with Fr. John Strittmatter, SCJ, originally a member of the US Province.

“I think it is vital for our members in the US Province, especially our beloved younger members, students and novices, to keep in mind and prayer our sister province here in South Africa,” concluded Fr. Charles.  “Here, we have Fr. John Strittmatter, and in the US we have Bishop Joseph Potocnak, who bear living witness to the grand history of the US Province (along with the German Province and, of course, the Polish Province) in South Africa.”

Click here to read more on the US Province website. Fr. Charles is pictured above (third from right) with Dehonians on retreat in South Africa. 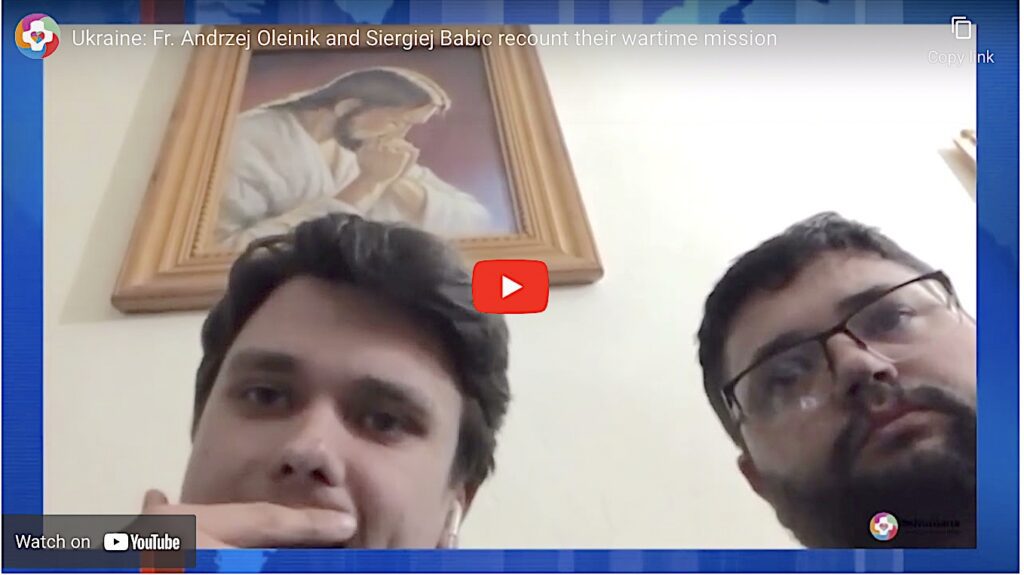 Learning what it means to be a Dehonian

“Before the war I did not understand what it means to be a Dehonian. These days with the confreres I learned the word ‘availability’. Availability is the best choice: availability to listen, to give a helping hand. It moves me and gives me strength; it makes me understand what it means to be part of a large family. Fr. Dehon often said that we must help to build things, houses, places, where we can welcome people.”

The quote is from Siergiej Babic, a Ukrainian medical student who was discerning a vocation to the Priests of the Sacred Heart when the attack on his country by Russian forces began. He continues his discernment, but now as a medic, assisting fellow Ukrainians as best he can.

“This dramatic experience has taught me a lot,” said Siergiej. “Above all that people need love, need closeness. I have found the charism of the congregation now: in being close to people, a closeness of heart, of help, of love. Today I gave a medical exam to a sick woman. The dialogue and presence with this sick woman and me changed the situation. This person was sad, but then, after this dialogue, I saw hope and happiness.”

Click here to access the full interview of Siergiej and Fr. Andrzej Oleinik, SCJ, a young Moldavian Dehonian in Ukraine with Siergiej, on the general website. There is a YouTube video interview at the link, but next to it is an English translation. 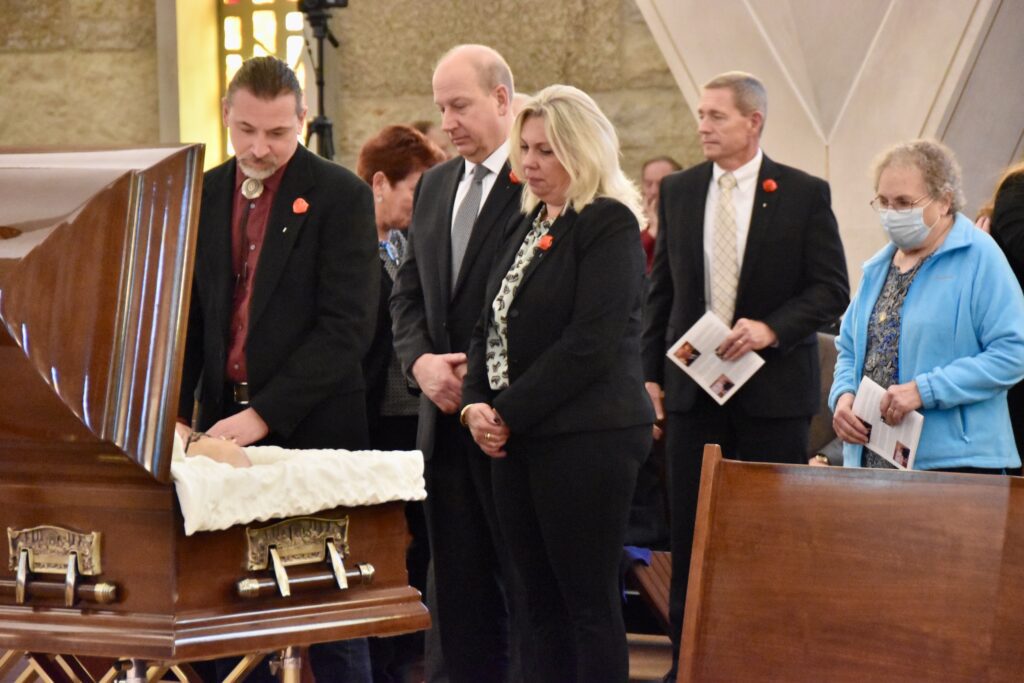 The chapel at Sacred Heart Monastery / Sacred Heart Seminary and School of Theology was just about full on Saturday morning as SCJs, friends and family from around the country came together to celebrate the life of Fr. Johnny Klingler, SCJ. Fr. Jim Schroeder, SCJ, Fr. Johnny’s close friend and fellow community member of many years, was the main celebrant and homilist at the Funeral Mass. At the altar alongside him were Fr. Vien Nguyen, SCJ, provincial superior, and Fr. Jack Kurps, SCJ, vice provincial. During the wake, many stories of pranks, good cooking, friendship and fellowship were shared. Common to all was Fr. Johnny’s compassion for the poor and refusal to turn his back on injustice.

Click here to view photos from the funeral, including interment at the Sacred Heart Community Mausoleum.

Click here to view a video of the Funeral Mass. Note that the funeral begins at approximately 15:00 into the livestream. Also, there were some initial audio difficulties that were addressed a few minutes into the Mass.

Fr. Angelo Jose Adao, SCJ, a member of the Brazil – Sao Paulo Province, has been named the Secretary General as of April 1. In his email announcing the appointment, Fr. Pedro Iglesias Curto, SCJ, the current Secretary General wrote that “I will continue for a few more months in Rome, as a support to the new Secretary and at the service of the Superior General, trying to share the experience acquired in these years. In September I will join the community that my Provincial Superior wants me to join.

“At the end of this stage, I feel that all this time has been a gift from God. Being able to be here, to have such a broad perspective of our Congregation has made me discover that, although sometimes we are so immersed in our daily life, there is so much that the Lord is doing in our history. Even where we discover our poverty, there is still so much life. Thank you.”

First, before we list the April birthdays, a happy birthday to Fr. Jim Schroeder, who celebrates his birthday this Wednesday, March 30. Those with birthdays in April include: Fr. Jim Walters on April 17 (Easter), Fr. Jim Schifano on April 19, Fr. Hendrik Ardianto (Ardi) on April 24, Br. Duane Lemke on April 26, Fr. Tom Lind on April 27 and Fr. Stephen Huffstetter and Frater Thuan Nguyen on April 29. And how will Fr. Steve celebrate his birthday? By packing his bags and getting ready to head to North America. The General Visitation of the US Province begins on April 30 in Pinellas Park, FL. Happy birthday! 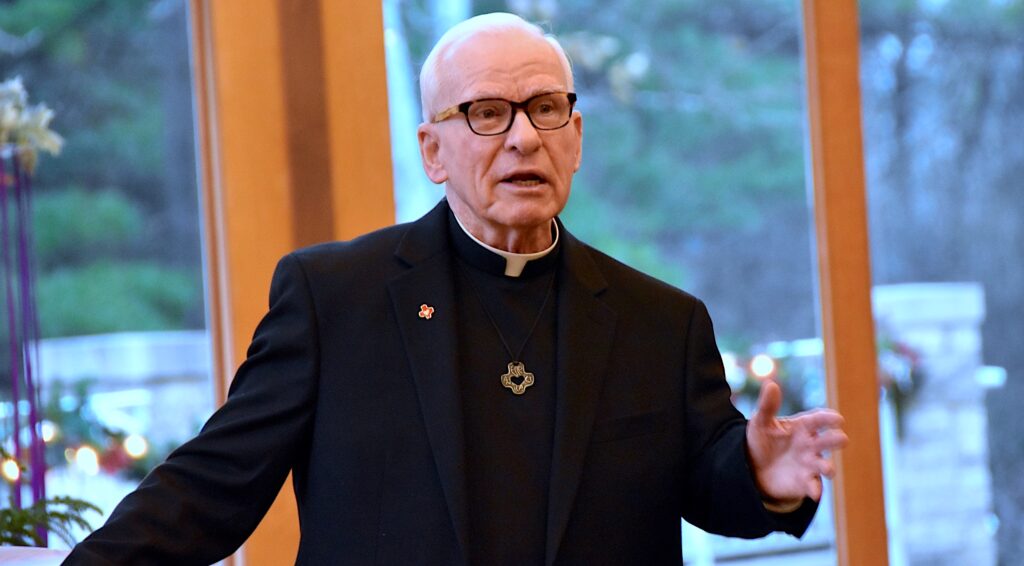 “Let it be done to me according to your word”

“As we celebrate this feast of the Annunciation we ask through the intercession of Jesus and Mary that we might be convinced, like Fr. Dehon, of God’s tremendous love for us, that love which became incarnate in Jesus and is symbolized by His pierced Heart,” said Fr. John Czyzynski, SCJ, last week in his homily for the feast of the Annunciation. “It is belief in that great love of God for us that empowers us to move through our fear, to rise above it, convinced that God would never hurt us, and enables us to abandon ourselves to God to do and to accept whatever God asks of us as individuals and as members of this congregation.” 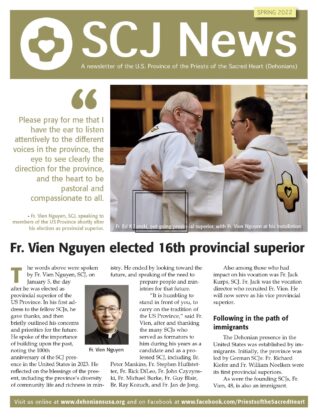 Click here to download a PDF of the Spring SCJ News. The issue includes features on the new US Province administration, Fr. Guy Blair’s paintings of the homeless in San Antonio, the February General Conference in Rome, Bishop Zolile Mpambani’s visit to Hales Corners, and quotes from Br. Guy Consolmagno, SJ, director of the Vatican Observatory; he spoke at the February Dehon Lecture at Sacred Heart Seminary and School of Theology. 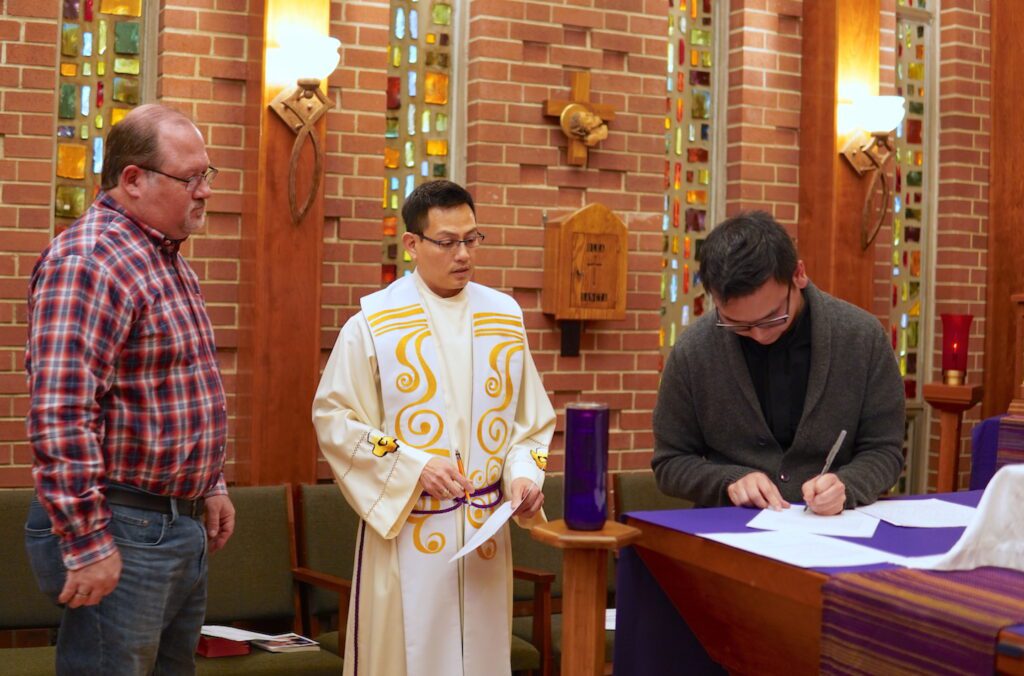 Congratulations to Frater Henry Nguyen, SCJ, who made his Oath of Fidelity and Profession of Faith during Adoration with the Sacred Heart Community on March 22. Frater Henry’s diaconate ordination is scheduled for Saturday, May 7 (the day after Frater Henry graduates from Sacred Heart Seminary and School of Theology). Bishop Joseph Potocnak, SCJ, will be the ordaining bishop. As the date gets closer, we will share details about the livestream. Invitations to SCJ in North America went in the mail last week.