Internationality and collaboration among topics of Superiors Meeting in Rome

From November 11-15, the superiors of all of the SCJ provinces, regions and districts from around the world gathered in Rome. It was a time to share information from and to the general administration, but also to dialogue with one another.

Meeting topics included internationality, formation, finances, ministry to youth and young adults (in particular, vocation ministry and campus ministry), congregational spirituality centers, the next general conference and collaboration. Collaboration and internationality were overlapping themes in many of the topics.

Other subjects included the next World Youth Day, which is to be held in Lisbon, Portugal, in 2022. The Portuguese Province has offered to promote and host this event as an opportunity for Dehonian youth from around the world to be together. Also, the superiors learned about new missions in Colombia and in the Netherlands. Soon, SCJs preparing for the Colombia project will gather in Quito, Ecuador, to get to know one another and prepare for their mission.

During the closing Eucharist, Fr. Vincent Sri Herimanto, SCJ, was sworn in as the newest general councilor. He replaces Fr. Alex Sapta, SCJ, who stepped down earlier this year.

Photos, videos and reports from the week have been posted on congregational website. Click here to access a page that lists the various links. Many links can also be found on DehoniansWorldwide (congregational Facebook page).

Click here or on the image below to view Fr. Ed Kilianski’s reflection on the meeting. 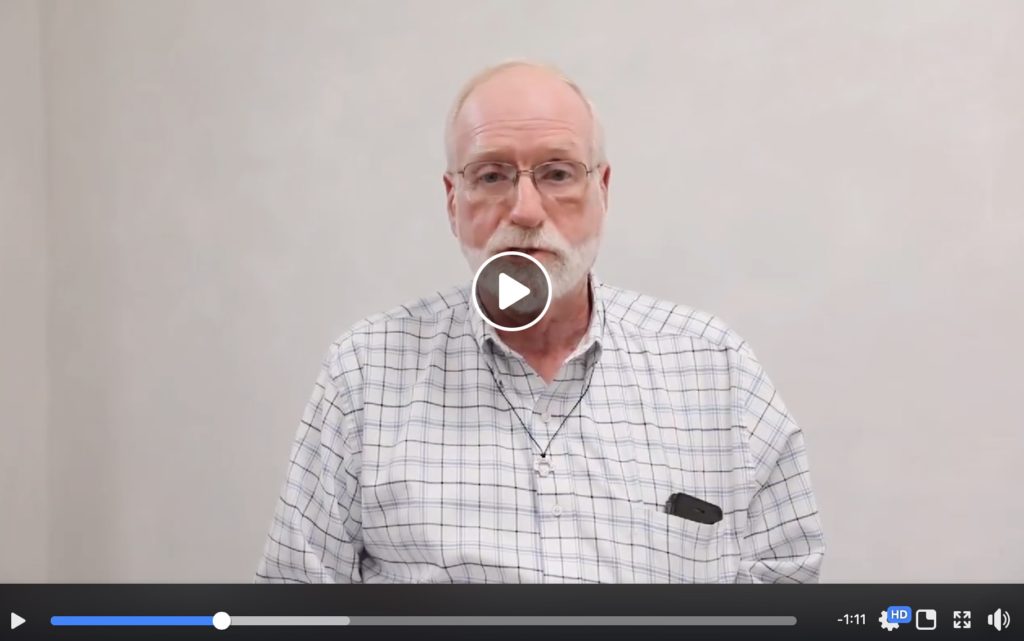 Click here or image below to view a reflection by Fr. Francis Vu Tran, SCJ, superior of Vietnam. 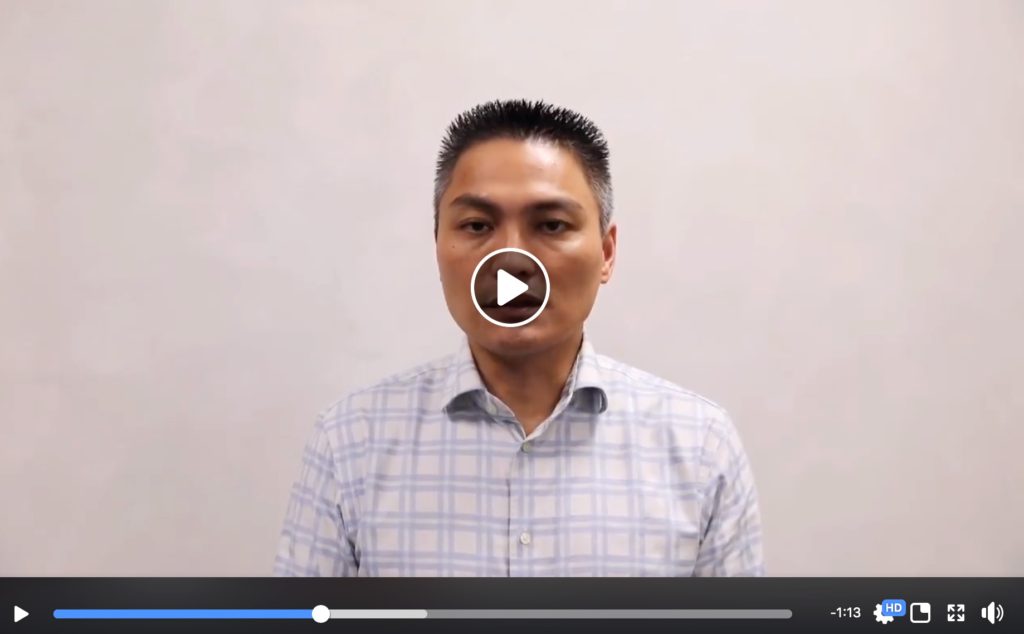 Prior to last week’s meeting, the newer entity superiors took part in a workshop to assist them in their leadership roles. “In addition to what we learned in the management of our entities,” said Fr. Gustave Lulendo, SCJ, “we experienced ‘We Congregation’ in its aspect of internationality, and that greatly enriched me.” Click here to read Fr. Gustave’s reflection on his initial days in Rome; it is posted on the Canadian blog.

Fr. Hendrik Ardianto, SCJ, moved to Lower Brule, SD, on November 14, where he will join the pastoral team. The community is now served by two Father Hendriks!

Dr. Austen Ivereigh was the featured speaker at the Dehon Lecture at Sacred Heart Seminary and School of Theology on November 13. A journalist and the author of The Great Reformer, a biography of Pope Francis, Ivereigh was the opening presenter at last year’s SHSST symposium “Discovering Pope Francis.” His latest book, Wounded Shepherd: Pope Francis and His Struggle to Convert the Catholic Church, just went on sale.

The book was a starting point for his Dehon Lecture topic: “Wounded Shepherd: the Sacred Heart and the Reform of Pope Francis.”

“One of the greatest secrets of Pope Francis is joy,” said Dr. Ivereigh. “The word ‘Joy’ is found in so many of his documents. While he sees the poor as the wounds of Christ, he experiences also the joy of Christ’s self-giving. As the ordinary, faithful people flock to him and he to them, he who has lived so contemplatively in the Sacred Heart of Jesus has such a heart for them that their joy has become his joy.”

Fr. Stefan, who was also the homilist at the midday liturgy, noted that Fr. Dehon, as Pope Francis, could have been referred to as a “reformer” (in the title of Dr. Ivereigh’s first book on Pope Francis). He continued, saying that Fr. Dehon could be considered as a reformer, but what moved him to this? For Fr. Dehon, said Fr. Stefan, the question was not simply “What must I do?” but “How should I love?”

Love, for Fr. Dehon, was both a point of departure and a point of arrival.

“Reform is the fruit of conversion,” said Fr. Stefan. “Fr. Dehon’s conversion was to a self-giving love that had a particular sensitivity to the wounded of society.”

Click here to view photos from the Dehon Lecture (they are also available on the US Province Facebook page).

Click here to access a recent article on the Vatican News website about Dr. Ivereigh’s latest book (all copies at the Dehon Lecture quickly sold out).

“Fr. Stefan shared with us how he came to know the Priests of the Sacred Heart,” wrote Frater Henry Nguyen, SCJ, on the province blog. “He was at a national Catholic gathering and discovered the SCJs in a magazine. That there were no limits to the types of apostolates SCJs could be a part of is what attracted him to the community. He came to learn that regardless of where we are, we remain faithful to a particular spirituality, that our charism calls us to be Christ-centered. This is rooted in Fr. Stefan’s favorite constitution citing: “As disciples of Father Dehon, we want to make union with Christ in His love for the Father and for all the principles of our life” (Cst 17).”

Last Friday’s issue of Dehonian Spirituality included a reflection about Fr. Dominic Wessel, SCJ, written by Fr. Jim Alexander, SCJ. It is a window into the early days of the province. Both SCJs are now deceased.

“Dominic Wessel and I first met when I came to Donaldson on December 5, 1935,” wrote Fr. Jim.  “Pete Miller, Denny Devine, Paul O’Brien, and Ken Stoll were also there at the beginning of “Cor Divinum” [the Latin name for Divine Heart Seminary].  There I learned early of Dom’s expertise not only in playing baseball, but also of his knowing all the possible facts and percentiles of every cotton pickin’ player and team in America.  He couldn’t warble these figures like Mel Allen or Vince Scully, but he made as many prophetic statements about players as they did.  Thus, did we, his classmates, learn there was another world out there besides the world of Cicero, Virgil, and Homer…

“His Divine Heart students were in awe at his knowledge of Latin and Greek, but from the conversations we held at our faculty meetings, he was in awe at their achievements.  Mysteriously each present class in each respective year was the worst he ever taught; but when they went on to a higher grade at Donaldson, they were, in his declared opinion to the class who succeeded them, the best he had encountered in his teaching career.

“I knew Dom in a spiritual way, too, because he was my confessor and advisor during my stay at Donaldson as a teacher and later principal.  He never showed even a touch of impatience or irritation when someone came knocking at his door, no matter what the hour.  If he was awake, you were welcome.  Surprisingly, for a man who himself was bothered by depression, he would show the other side of the dark clouds to visitors, the side reflecting the sun’s rays.  Dom never tired of speaking about God’s mercy and compassion, as if he were talking to himself as well as to the penitent.”

Click here to read the full text in the November 15 issue of Dehonian Spirituality.

Tonight, November 18, the North American Migration Committee hosts A Pastoral Response to Human Trafficking. Dn. Steve Przedpelski, executive director of Franciscan Peacemakers in Milwaukee will speak about his 24 years of ministering to women involved in street prostitution, how much of the sex trade is connected to human trafficking, and what can be done to address this problem, especially by pastors and those involved in pastoral ministry. The presentation will begin at 7:00 p.m. at the Provincial Conference Center. It is free and open to the public.

Also, the 2019 Advent Concert of Sacred Music in Celebration of the 25th Anniversary of the Berghaus Pipe Organ will be on Sunday, December 8, beginning at 3:oo p.m.  The concert will feature Benjamin A. Stone, organist, Charles Christian Rich, organist, and the Bach Chamber Choir. Click here for more information.

Fr. Bernie Rosinski, SCJ, shares the following photo below that appears in a recent issue of American Magazine. “It is from the first page of an article on the Amazon Synod with a photo of Pope Francis,” wrote Fr. Bernie. “Standing right next to him is Bishop Vilsom Basso, SCJ, of the diocese of Imperatriz in the Amazon. [Bishop Vilson is in the front, lower left] The bishop was an ESL student at Sacred Heart Seminary and School of Theology before he became a missionary in the Philippines. He was named bishop in 2010.” 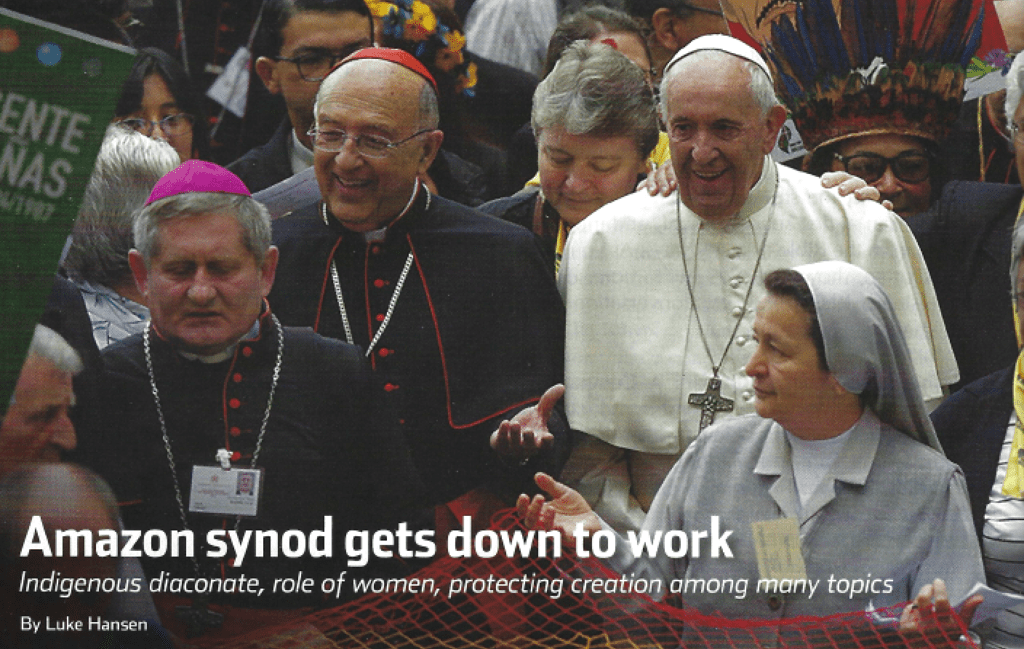