St. Thomas More parish in suburban Toronto was a fitting backdrop for the October 18 meeting of the US and Canadian administrations. It is an immigrant parish with over 40 nationalities represented among its ranks ministered to by an international team of SCJ priests: Fr. Willyans Prado Rapozo (Brazil), Fr. Giovani Pontes (Brazil) and Fr. Aegidius Warsito (Indonesia).

As with the last meeting of the councils in May, migration and internationality were topics that repeatedly rose to the surface of discussions. During the opening roundtable, updates included news of a new pastoral team in Montréal made up of SCJs from Cameroon and Congo, ministering to a cluster of three French-Canadian parishes. Fr. John van den Hengel spoke about the Syrian refugee family that the Ottawa community is sponsoring. The SCJs are financially supporting the family as it resettles, but more importantly, accompanying them in everything from filling out healthcare forms to helping them simply getting a sense of their new city.

The councils heard a presentation by Connie Sorio of Kairos on the issues of migrant workers. Kairos is an ecumenical social justice organization of 11 churches and religious organizations. Fr. Peter McKenna, who works with Becoming Neighbors (an immigrant and refugee support organization based in Toronto) facilitated the presentation.

Before concluding their meeting the councils recommitted themselves to the North American Immigration Committee which developed in response to the 2013 North American Conference.

Collaboration, not just cooperation, has been a growing theme in the meetings of the North American administrations. To ensure that ideas surfaced during the twice-yearly gatherings don’t sit dormant in the minutes of those meetings, an executive committee that includes the two superiors and vice-superiors of each entity was established. This group will be in communication throughout the year to follow-up on topics surfaced at the meetings.

Click here to read more about the meeting. The next one will take place May 15 in Hales Corners.

An alumnus of Sacred Heart Seminary and School of Theology’s ESL program, Fr. Jean-Marie Signié, is now provincial superior of the Cameroon Province. In September he returned to Sacred Heart in the midst of meetings in Canada and the United States. Before one of those meetings –– with the US Provincial Council –– he sat down for an interview.

Although the SCJs have been in Cameroon since 1912, the province itself is only about 20 years old. For many years the SCJ presence was a missionary region under the jurisdiction of the French Province. Fr. Jean-Marie is only the second indigenous SCJ to be provincial superior. He succeeds the first, Fr. Leopold Mfouakouet, who served from 2011 until his election to the General Council in 2015.

There are now 113 SCJs in the province spread among 12 communities in Cameroon and two in Chad. Most ministry is parish-based, but the province also supports a program for at-risk teens, some of whom live in the streets.

Cameroon is a bilingual country of French and English. The province reflects this: its philosophy program is in English and its theology program is in French. Cameroon has students studying in Rome, Belgium, Ireland, Germany and Portugal (preparing for the SCJ mission in Angola). It also welcomes international students, including two seminarians from India.

Fr. Jean-Marie converted to Catholicism when he was a teen, as did three of his siblings. Soon after, he felt drawn to the priesthood. During a discernment weekend sponsored by the SCJs he found a book about Fr. Leo John Dehon. “I stayed up and read it in one night. I was sold. This was what I was feeling in myself. This is what I was called to.” He professed his first vows in 1990.

Click here to read more about Fr. Jean-Marie, as well as the Cameroon Province.

Br. Ben Humpfer of the vocation office asks that those who have not sent him their Advent reflection do so ASAP! If you were asked to do a reflection for the office and are no longer able to respond, please let Br. Ben know. His email: humpfer1966@gmail.com [NOTE: the email address listed for Br. Ben in the recent printed directory is incorrect; this is Br. Ben’s current email address.]

Mark Zwick, one of the founding directors of Casa Juan Diego, is in home hospice. Casa Juan Diego is a regular recipient of a Justice, Peace and Reconciliation grant from the US Province. It provides emergency food, shelter and clothing to predominantly Hispanic migrants and also serves as the city’s Catholic Worker House and home of the Houston Catholic Worker newspaper. Mark’s wife, Louise, wrote to JPR director Mark Peters, asking for prayers. With the help of volunteers she is keeping the shelter operational but it certainly a challenging time in the midst of her husband’s declining health. Click here to read an article about the couple and Casa Juan Diego.

Fr. Ed Kilianski will be in San Antonio for CMSM meetings October 23-26. October 29 – November 8 Fr. Ed will join Fr. Dominic Peluse on a trip to Ireland with benefactors of the Province Development Office.

Fr. Vincent Suparman and Fr. Joe Dean (pictured below) were honored last night (Oct. 23) by St. Joseph parish at Fort Thompson, SD, for their religious jubilees. Fr. Joe is 50 years in vows and Fr. Vincent is 30. Dn. Steve McLaughlin, on behalf of the entire parish family, thanked the Priests of the Sacred Heart for sending its members to serve the people of the East and West River parishes. 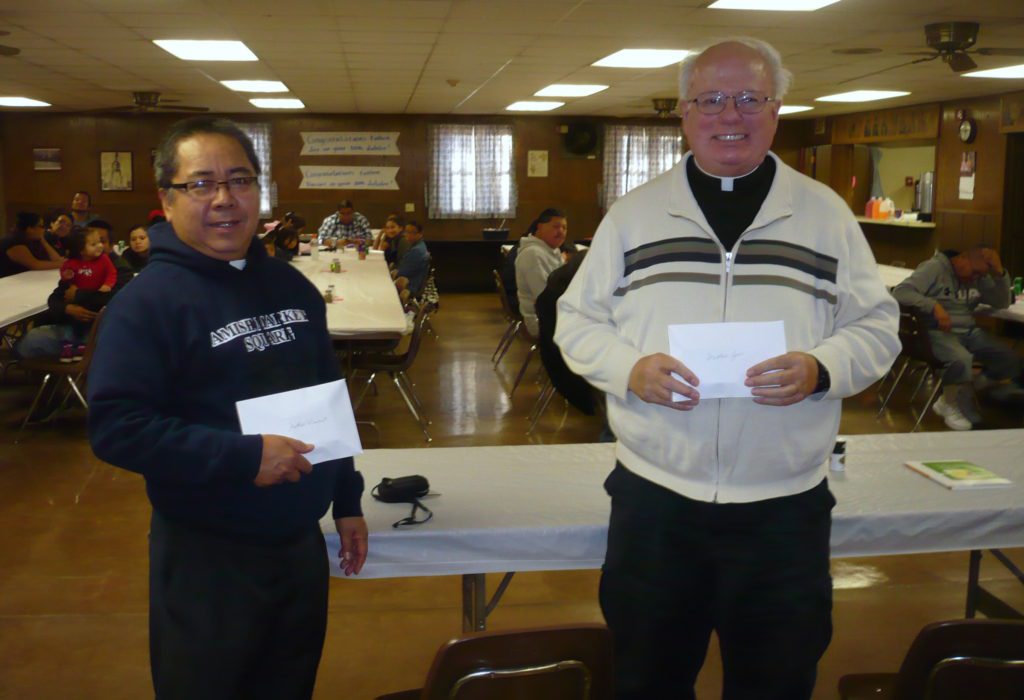