The cardinal began by reflecting on the time into which Fr. Leo John Dehon was born (1843). By then, the Industrial Revolution had turned workers into replaceable cogs amid difficult and often unsafe working conditions. Family life among the large numbers of working poor suffered.

“People turned away from the Church, which they saw as inept in handling the economic, political, and sociological crises of the poor and lower-class citizens in society,” said Cardinal Turkson. “The Church no longer had influence over the government or its people… Fr. Dehon wanted to sensitize parish priests and seminarians about social problems so that they would leave their sacristies and go to the people.”

The cardinal spoke about the founder’s desire to teach and promote Pope Leo XIII’s encyclical Rerum Novarum, which addressed the condition of the working classes. Rerum Novarum was followed by 16 social encyclicals including two by Pope Francis: Fratelli Tutti (2020) and Laudato Sì (2015).

In the afternoon, two panelists responded to the cardinal’s presentation. Catherine Orr is the Pastoral Associate at Lumen Christi Parish in Mequon and Program Coordinator for the Roundtable Association of Catholic Diocesan Social Action Directors. Dr. James Stroud, S.T.D. is an Associate Professor of Moral Theology at SHSST; he teaches in the areas of fundamental moral theology, biomedical ethics, social ethics, and philosophical ethics.

“What becomes novel with Pope Leo XIII and Rerum Novarum is that he sets out in a certain way to tackle the Industrial Revolution and the rise of socialism that really brings about radical social changes for all European life and has significant ramifications for the Church and the people who make up the Church, the Body of Christ,” said Dr. Stroud.

“Fr. Dehon had the same insight, that there needs to be an on-the-ground way to catechize people, including priests, on their responsibilities in living out the social teaching…

“It made me think, in light of Cardinal Turkson’s overview, if perhaps we already have a social catechism unfolding before us, and that begins with the social encyclical of Leo XIII.”

Click here to read more on the province website. Links to the three livestreams from the day are at the bottom of the linked page, as well as Cardinal Turkson’s PDF from his presentation.

This year the Priests of the Sacred Heart celebrate the 125th anniversary of the SCJ presence in the Democratic Republic of Congo. Among those who took part in the celebrations during the weekend were Fr. Vien Nguyen, SCJ (provincial superior of the US Province), Fr. Gustave Lulendo, SCJ (superior of the Canadian Region and former member of the Congolese Province) and Fr. Charles Brown, SCJ, former missionary in the Congolese Province. Many thanks to Fr. Floribert Bulo Dhelo, SCJ, an alumnus of our ECS program at Sacred Heart Seminary and School of Theology for sharing the photos. Click here to view more on Facebook.

Fr. Rafael Querobin, SCJ, shares the following: “On behalf of the Querobin family, I want to thank all the SCJs and the Dehonian family for your prayers and messages during this difficult time of my father’s sickness and passing. I also want to thank Br. Duane Lemke, SCJ, for coming to Brazil to attend my father’s funeral. His presence brought peace and comfort to my family and me.

“Thank you all for making me feel like your close brother, even though I have only been a part of your life for a short time.” 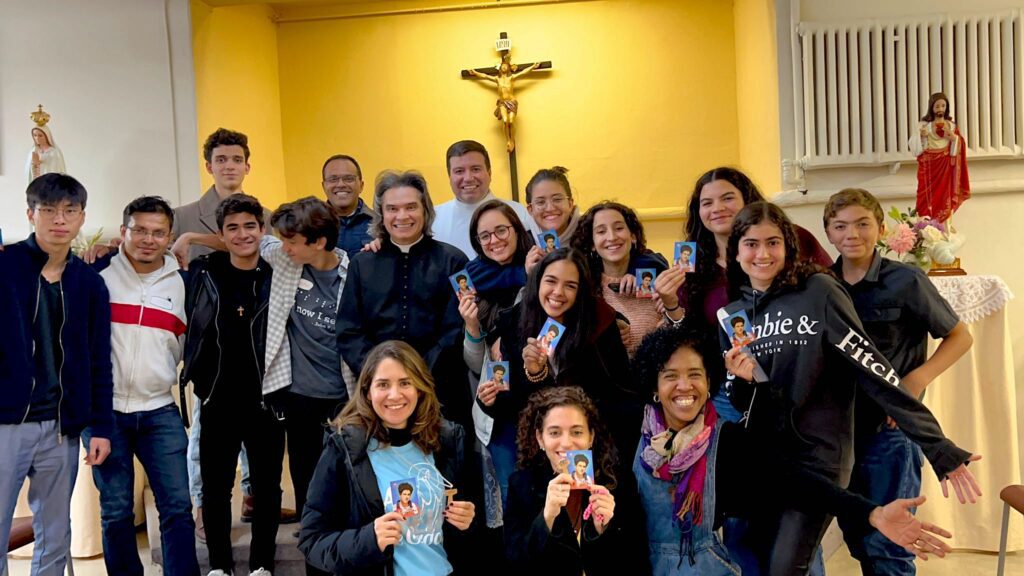 Fr. Willyans Prado Rapozo, SCJ, pastor of St. Helen parish in Toronto, shares news of an event that took place at the parish the week of October 3:

“We welcomed Fr. Fábio Vieira from the Diocese of Corumbá, Brazil, who came to share with our parishioners the inspiring example of Blessed Carlo Acutis, an Italian millennial who died of leukemia at the age of 15, and was beatified by Pope Francis in 2020.

“Fr. Fábio had been chosen to accompany the beatification process in Rome, carrying the documentation of the miracle which happened in Brazil and was accepted by the Vatican as a sign of Carlo Acutis’ intercession. He also had the gracious opportunity of living for a year with Carlo Acutis’ family in Assisi, where he learned precious memories of this holy young man from those who were very close to him. As you can imagine, he had a lot to tell us. He also brought a first-class relic which was displayed during the entire mission week. Many people from all over Toronto came to St. Helen’s to hear Fr. Fabio, and venerate the relic. The program included Holy Mass, Eucharistic Adoration and Confessions, as well as talks, both in Portuguese and English.

“The highest point took place on Saturday, October 8, with a day-long retreat attended by over 400 people. At the end of the day, an altar with the relic was blessed, and it will remain at St. Helen’s Church for all those who will come to visit and pray. Before returning to Brazil, Fr. Fabio also took time to visit and present the relic at Our Lady of the Rosary and St. Thomas More parishes. We were quite impressed by the amount of people, especially the youth, who came and were inspired by Blessed Carlo Acutis.

“We hope that this event will bear fruits of strengthening the Youth and Young Adult ministries in our parish communities.”

Frs. Will and Fabio are pictured above with youth at St. Helen’s. 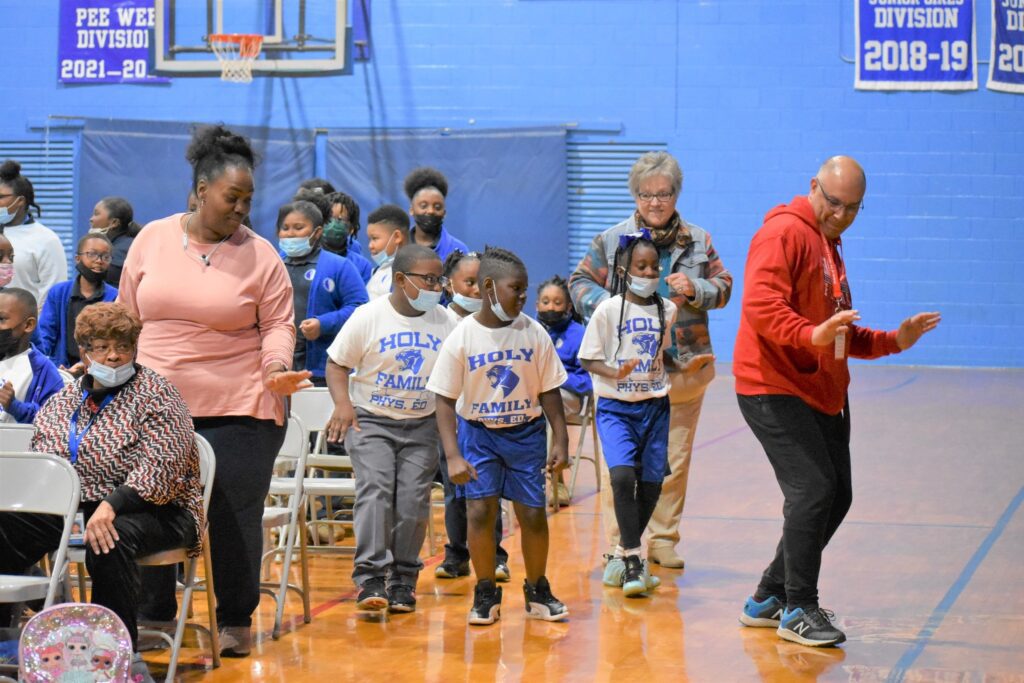 On Wednesday, October 19, the Cazateatro Bilingual Theatre Group performed for students and staff at Holy Family School in Holly Springs, MS. The performance was a part of the school’s commemoration of Hispanic Heritage Month. Cazateatro is the only bilingual theatre group in Tennessee. The group entertained the school with interactive Latin American dances and songs. As you can see in the photo above, Br. Diego Diaz, SCJ, who is from Argentina, was quick to join in the cultural exchange.

This day in SCJ history

Tomorrow, October 25, marks the 157th anniversary of Fr. Leo John Dehon’s entrance to the seminary, formally beginning his preparation for the priesthood.

The young Dehon was a sophomore in high school when he felt an intense call during Midnight Mass to become a priest. He told his father that upon graduation he wanted to enroll in the seminary. But his father, having other aspirations for his son, said no, and so Leo went to Paris to study law. It was only after he completed the law degree that his father gave his blessing to allow him to pursue the call he felt years earlier.

The skirts have kept evolving over time. Now, they are a way for Native American women to affirm their identity and celebrate their heritage. Staff at St. Joseph’s Indian School work to ensure that each female student has her own ribbon skirt.

Pictured below are some of the staff and students at St. Joseph’s wearing their ribbon skirts during the celebration of Native American Day earlier this month. 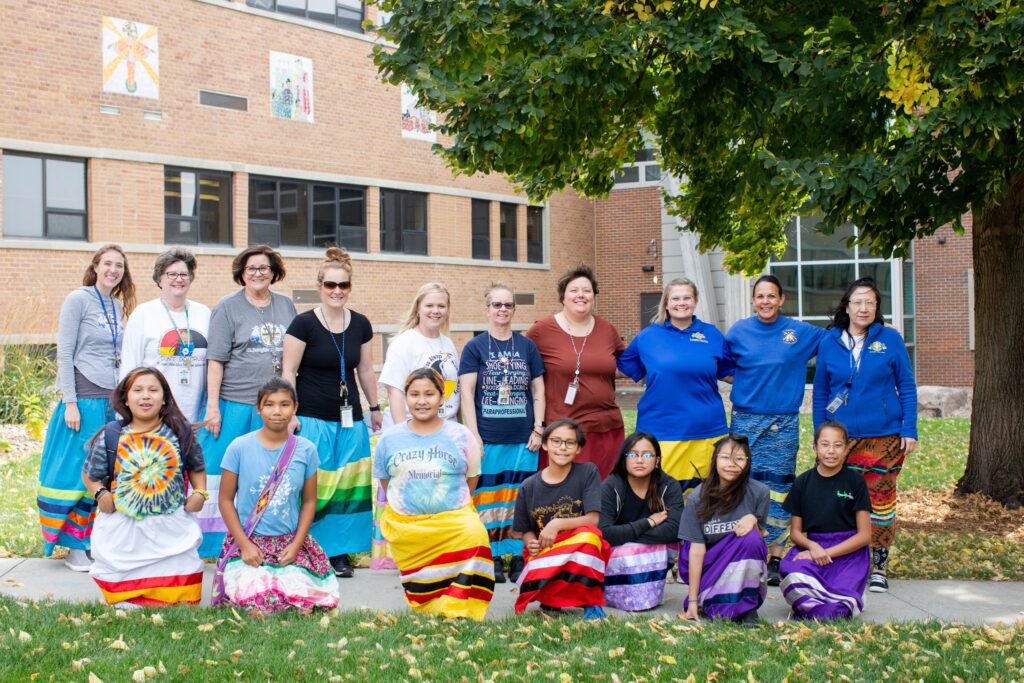