Have a missionary spirit!

On Friday, the student community at Sacred Heart Monastery welcomed Fr. Stephen Huffstetter, SCJ, to speak about what it means to be a missionary, to have a missionary spirit. Originally from the US Province, Fr. Steve is now vicar general of the Priests of the Sacred Heart based at our Generalate in Rome. After a year-long delay due to the pandemic, he is finally enjoying a return to North America, taking the opportunity to visit SCJ communities and ministries, as well as his family.

What does it mean to have a missionary spirit? For Fr. Steve, the idea of “encounter” is key. “We learn from others, we see God in others,” he said.

Fr. Steve cited three scripture passages when speaking specifically to what it means to be a Dehonian missionary.

“The first is from Luke 9:3,” he said. “It basically says, ‘Just go.’ Take nothing for the journey. Fr. Dehon’s first missionaries weren’t always well prepared, but Fr. Dehon told them to ‘just go,’ adding that if they listened to the people, they would learn what they needed to serve them.”

“God will give you the words,” said Fr. Steve, adding that while it is important to prepare as much as one can, it is also important to be flexible and not be overly worried about how one will be received. Prepare, but trust in God.

And finally, Fr. Steve said that to have a missionary spirit is to be willing – at times – to feel like a “little child.” (Matthew 18:3). He spoke of his own experience in Rome, feeling like a frustrated child, struggling to learn a new language (Italian). “It is important to not just do what we are good at, or what we are comfortable with,” he said. “We have to be open to going where we are not comfortable so that we can learn and be supportive of others, and respect those who are different than ourselves.”

The Mississippi SCJ Community recently invited parishioners from its six parishes in northern Mississippi, as well as volunteers at Sacred Heart Southern Missions, to consider becoming a Dehonian Associate. Four introductory sessions were held during the past week: one in Spanish, three in English. More than 40 parishioners expressed interest in learning more about Dehonian spirituality and the Dehonian Associates.

Fr. Jack Kurps, SCJ, told participants, “You already join us in ministry. We would like to share our spirituality in a more intentional way with you.”

Like the group of Dehonian Associates formed in September 2016 in Mississippi, this group will meet monthly using the one-year program adapted by David Schimmel (retired director of Dehonian Associates) from the four-year congregational Spiritual Path for Lay Dehonians. Monthly topics include the major elements of Dehonian spirituality. The lesson plans for this one-year program can be found on the province’s website at https://dehoniansusa.org/the-spiritual-path/.

The Canadian Region recently welcomed Fr. Guy Bertrand Wabo, a member of the Cameroon Province. He has joined the Ottawa community, and is enrolled in Biblical studies at St. Paul University.

Former SCJ Ray Sousa recently completed his first round of chemotherapy. He said that it went fairly well, and that initial tests are good. He is now on a five-week break before undergoing his next round. In April he was diagnosed with Stage 4 prostate cancer. Please keep him in prayer. 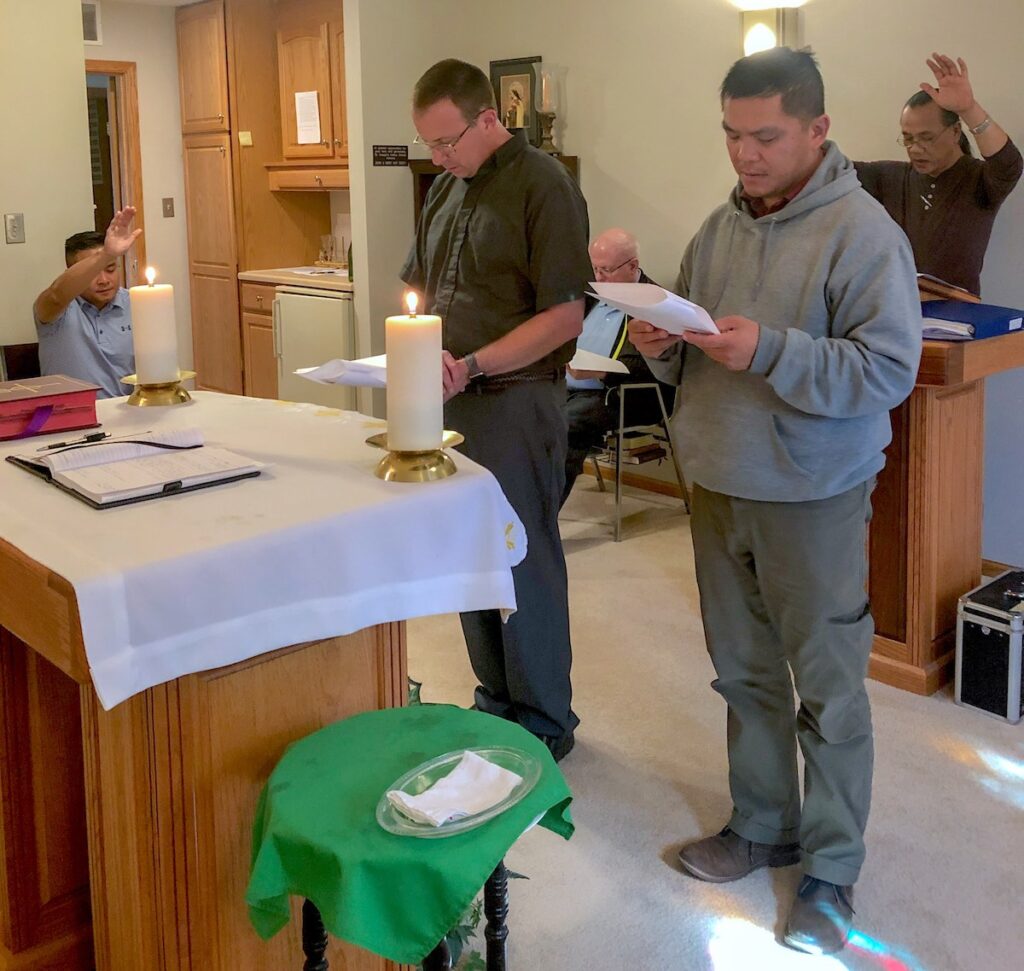 The Provincial Council recently appointed the following as the new local administration for the South Dakota community :

The remainder of the South Dakota community will serve as house council.

Letters with a saint

Following a chance meeting at a bus stop in Rome, one of our SCJ priests, Fr. Michael van der Peet, SCJ, developed a close friendship with Mother Teresa. In letters to him, she shared much about her life, including the challenges faced by her religious community, and even doubts about herself and her work.

Our province video team produced a video for release on September 5, Mother Teresa’s feast day. The focus is on one of her letters to Fr. Michael in which she tells him that her desire is to be a “simple sister” but that she realizes that such a life is not what God wants for her.

“Jesus may do whatever he wills of me without consulting me because I belong to him,” she writes, but adds that in her time of personal doubt “the silence and emptiness is so great. I look and I do not see, I listen but I do not hear. The tongue moves but does not speak, I am helpless.”

Because of his close friendship, Fr. Michael was asked to be on the commission that prepared Mother Teresa’s cause for beatification. She was canonized on September 4, 2016.

If you would like to hear Fr. Michael speak in his own words about Mother Teresa and their friendship, click here to view a video done with him in 2008.

“How do I become a priest?” and other questions from students

Join us for another installment of “Ask a Dehonian!” a series in which students from our Dehonian schools are invited to ask questions about the Church, their faith, and current events.

In this episode, Fr. Byron Haaland, SCJ, and Fr. Andrzej Sudol, SCJ, answer questions about how to become a priest, favorite memories from their lives as SCJ priests, and what they think heaven is like.

Answering the final question about heaven, Fr. Byron said that “the kingdom of heaven is among you, it is how we live out our baptism.” Fr. Andrzej added that for him, he believes that heaven is a time when we will be reunited with those whom we have loved.

Friend of the SCJs remembered

During yesterday’s Open House at Sacred Heart Seminary and School of Theology, Dr. Charlie Fox, a dear friend of the Priests of the Sacred Heart in Texas, was honored during a prayer service in the community chapel. Dr. Fox died within the past year and his children have made several donations to the SCJs in his name. His widow flew to Milwaukee for the Open House; the family was especially close with Fr. Frank Clancy, SCJ (now deceased), Fr. Anthony Russo, SCJ, and Fr. Richard MacDonald, SCJ, who is pictured speaking during the remembrance service.

The classrooms and student residences aren’t the only things getting a facelift at SHSST. Last week work began on the renovation of the Berghaus pipe organ in the Sacred Heart Chapel. The custom-built instrument is now 25 years old.

Work is being done by Ron and Christoph Wahl of Wahl Organbuilders (Appleton, Wisconsin) and is expected to take until February, 2022, to complete. According to Ben Stone, SHSST Organist and Director of Music, the work will be done in two phases. The first will address the mechanical components of the organ, so the instrument will not be able to be used for several weeks. The seminary has rented a small, digital organ to replace it until this phase is complete, most likely by the beginning of November.

The on-site work of cleaning and tuning the organ will begin after phase one.

On September 5, Bishop Italo Dell’Oro joined the community at Our Lady of Guadalupe Houston for Mass, followed by a meal with the SCJs. Bishop Dell’Oro was named auxiliary bishop for the Archdiocese of Galveston-Houston on May 18, 2021.

Alfonso Pizano was welcomed into candidacy last week during Adoration with the Sacred Heart Monastery Community. He has a master’s degree in education from Loyola Marymount University and was a teacher before entering formation. He begins his theology studies this fall at Sacred Heart Seminary and School of Theology.

We will have more about Alfonso, and the rest of those in formation, later this month. Alfonso is pictured below with Fr. Duy Nguyen, SCJ. 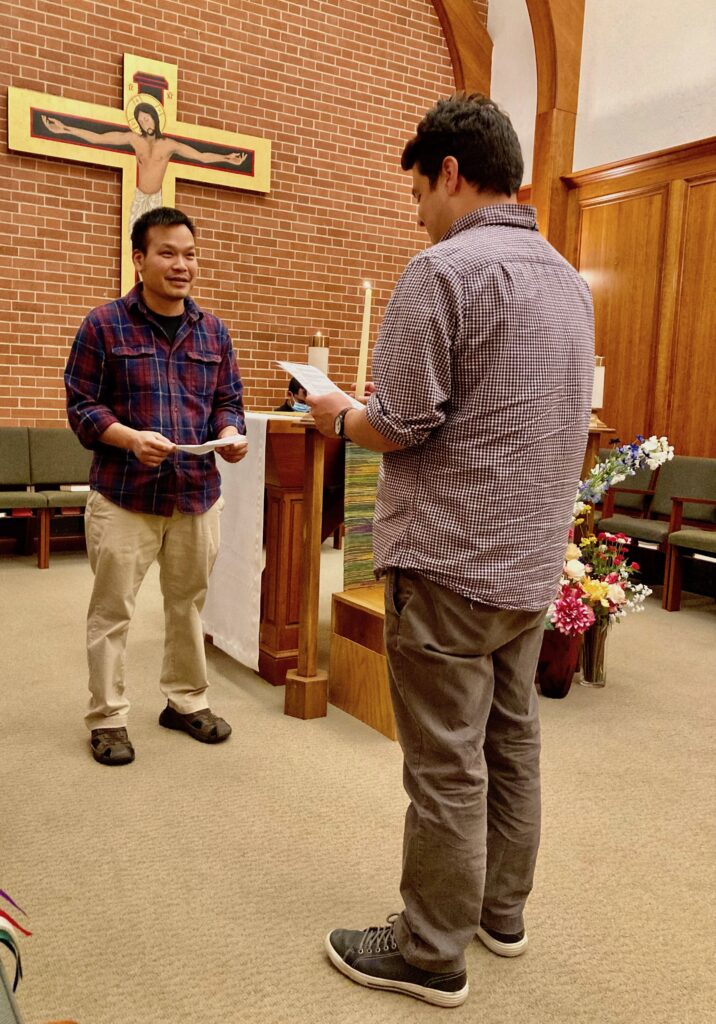