Each year we ask our students in formation to introduce themselves in their own words. Reflecting the diversity of the Priests of the Sacred Heart (Dehonians), as well as the Church itself, they represent a wide variety of cultural, educational and professional backgrounds. Yet they all have the same call to follow in the footsteps of our founder, Fr. Leo John Dehon.

This year’s formation program includes students at Sacred Heart Seminary and School of Theology, Marquette University, three at the Novitiate, and two in pastoral ministry in South Dakota.

“Overall, I’m just an ordinary guy with a disciple’s heart,” writes our newest candidate, Alfonso Pizano. “I’m grateful and eager to see what God has in store for me as I discern his will in my life all for his greater glory!

“I’m 42 years old and was raised in the California sunshine in the city of Whittier (Los Angeles County). I have a bachelor’s in English from Mount St. Mary’s University, and a master’s in Education from Loyola Marymount University. I also studied for a second master’s in Philosophy at Fordham University in New York. I am currently working on an MDiv at Sacred Heart Seminary and School of Theology while I discern and prepare for Catholic priesthood with the Priests of the Sacred Heart.

“Before joining the Priests of the Sacred Heart, I was a Catholic elementary school teacher and have taught everything from 1st to 8th grade. In addition to teaching at various Catholic schools in the Archdiocese of Los Angeles, I’ve taught in San Francisco, Phoenix and Guadalajara, Mexico. My work experience also includes a long stint at Disneyland, where I peddled souvenirs, danced as a snowman in the “Christmas Fantasy Parade,” piloted the Monorail, and sailed submarines on quest to find Nemo.

“Along with my passions for teaching and Disney Parks, I love going to the movies. Disney and Pixar films hold a very special place in my heart. I enjoy the theater and took great advantage of Broadway while I was a student in New York. I saw about 40 plays and musicals while I was there.”

Click here to view a photo album from the start of the new school year. 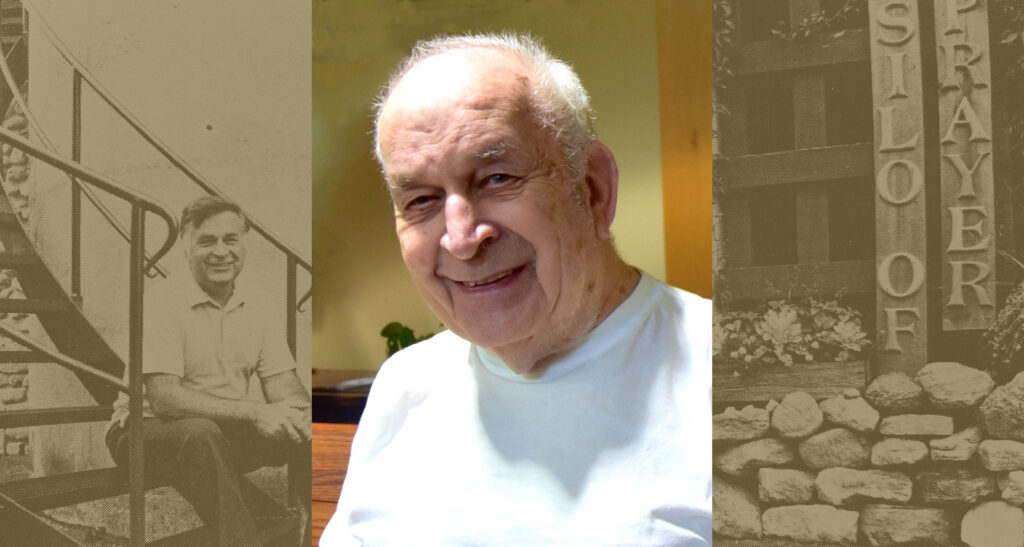 Early this morning (September 27), Br. John Monek, SCJ, died following several months in home hospice care. He turned 92 on September 18, and just days before his birthday, he was anointed, surrounded by members of his religious community at Sacred Heart at Monastery Lake.

Originally from Pennsylvania, Br. John served in the U.S. military before pursuing his vocation as a religious brother with the Priests of the Sacred Heart.

He commemorated his 60th anniversary of religious vows on September 8. Most of his years of active ministry were dedicated to St. Joseph’s in Baileys Harbor, Wis. Initially, it served as a novitiate for the province, and later as a retreat center. When the facility took on a new life in the diocese of Green Bay, Br. John retired and moved to the Milwaukee area. Since 2014 he had been a member of the Sacred Heart Community at SHML.

During his time at St. Joseph’s, one of the projects that Br. John took great pride in was the creation of a “Silo of Prayer.” “I got the idea when I was in the Southwest and saw an Indian kiva,” he said. “I sat inside and thought that it was so peaceful and easy to pray in so when I got back, I turned the old barn silo into a kind of kiva. I liked the idea that instead of a missile silo we had a silo dedicated to prayer.”

Fr. Byron Haaland, SCJ, will be the main celebrant. Those who are not vaccinated are asked to wear a mask. 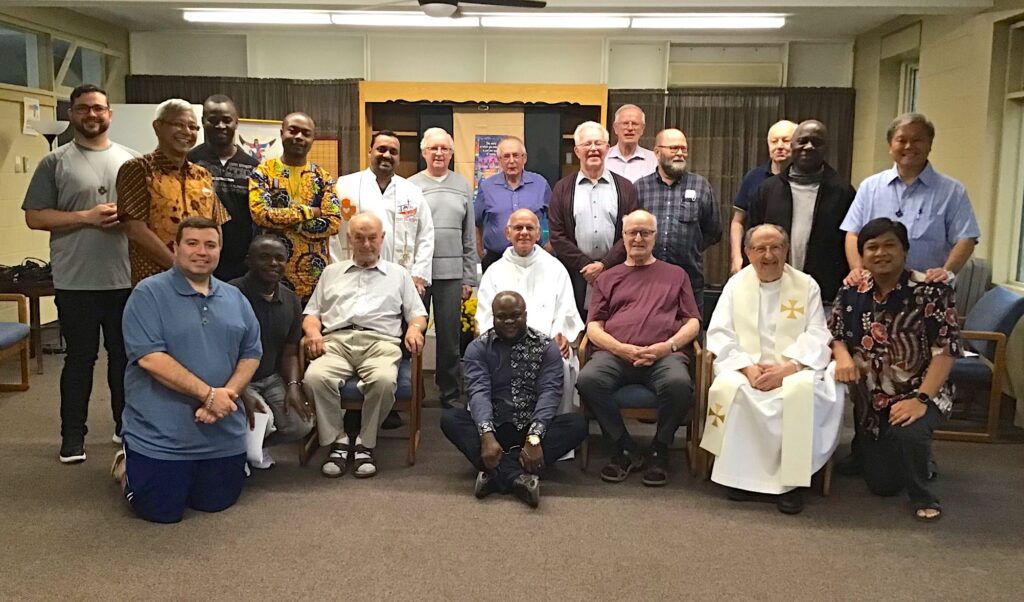 From September 20-23, the Canadian Region held its annual assembly in Arnprior, Ontario. The theme was “Fraternal Life in Community.” Fr. Jean-Hubert Thieffry from La communauté du Chemin Neuf, led the SCJs in a reflection on Pope Francis’ encyclical “Fratelli Tutti.”

“When Fr. Gustave proposed at Regional Council that at this assembly each one of us would give a reflection on our cultural roots, I responded by saying that we ought not forget the deeper cultural roots in Canada, which is with the aboriginal peoples,” wrote Fr. John van den Hengel, SCJ. “When I proposed this reflection, the discovery of the unmarked graves at former residential schools was uppermost in the minds of the country. If we are to talk about cultural roots and what that means in Canada, we have to take into account that outside of our birth cultural roots and the French and English cultural roots – our Canadian roots – there is another factor, another enrootedness, that we have tended to overlook. This is the relationship with the aboriginal peoples of Canada. We cannot be Canada and Canadian unless we delve into our past and assume a relationship with the aboriginal peoples. We cannot get ahead as a nation, as a people, unless we go back in our search for roots by uncovering the past of Canada and owning it in a new way. This awareness is of recent date although there has been a pervasive, unmentioned consciousness of this reality.”

We recently learned that Annice Callahan, RSCJ, died on August 10, 2019. She was one of several Leo John Dehon Fellowship recipients in the mid-1980s. Her doctoral dissertation was on Karl Rahner’s theology of the Sacred Heart, and she was a speaker at the first Sacred Heart Communities in Collaboration conference in 1995. Click here to read the full obituary on the RSCJ website.

What did your parents say?

In our fifth episode of “Ask a Dehonian” Frs. Andrzej Sudol, SCJ, and Byron Haaland, SCJ, answer questions about the participation of non-Catholics at Mass, how often God heals sickness, and what their parents’ reaction was when each said that he wanted to become a priest. “I raised you in the wrong religion!” said Fr. Byron’s father, a man who was raised in the Protestant faith.

“Ask a Dehonian” is a series in which students from our Dehonian schools are invited to ask questions about the Church, their faith, and current events. You can find previous episodes on our YouTube Channel, DehoniansUSA.

Click here or on the image above to view the most recent episode.

A reminder: this Wednesday, September 29, is the Dehon Lecture at Sacred Heart Seminary and School of Theology. The theme is “The Sacred Heart and Divine Mercy.” Although attendance is limited to SHSST students and staff, anyone is welcome to view the lecture online. Click here to register.

The lecture will feature two speakers: Robert Stackpole and David Schimmel. David is familiar to many for his work as Director of Dehonian Associates for the US Province.

Bring back an old tradition?

Speaking of David Schimmel, the former director of Dehonian Associates had an article published in the September 24 issue of America Magazine. Titled, “The pre-Vatican II ritual you’ve probably never heard of — and we should definitely bring back,” the article is about “Rogation Days,” days that the Church dedicated to petitionary prayer.

“What if the church had days specifically designated for big “asks” of God—forgiveness for transgressions, protection from disaster, protection of crops?” writes David. “If you checked the liturgical calendar prior to the Second Vatican Council, you’d find exactly that: the Rogation Days. Commemorated on April 25, as well as on the three days preceding Ascension Thursday, they were days the church dedicated to petitionary prayer (the Latin word rogare means “to ask”) focused on resolving physical and spiritual needs, averting war or pandemic, and soliciting a productive growing season. Prior to this past year, they might have seemed outdated; but today, could any spiritual practice be more opportune for our time?

“As a prelude to the celebration of a petition-themed Eucharist, the Rogation Day ritual included a procession during which the Litany of the Saints was sung. The litany not only called upon the intercessory help of holy ancestors in the faith, but also expressed a long series of specific intentions. This was followed by the recitation of Psalm 70 (a prayer for deliverance) and additional intercessions and prayers.”

During their visit to South Dakota last week, the Novitiate community spent time at Black Elk’s gravesite. The novices were in South Dakota learning about Dehonian ministries there, as well as the history of the area’s peoples. Among those joining them were Fr. Louis Mariano Fernandes, SCJ, a member of the Indian Distant serving in Mississippi, and Ron Zeilinger, a former SCJ  who spent several years working in South Dakota. 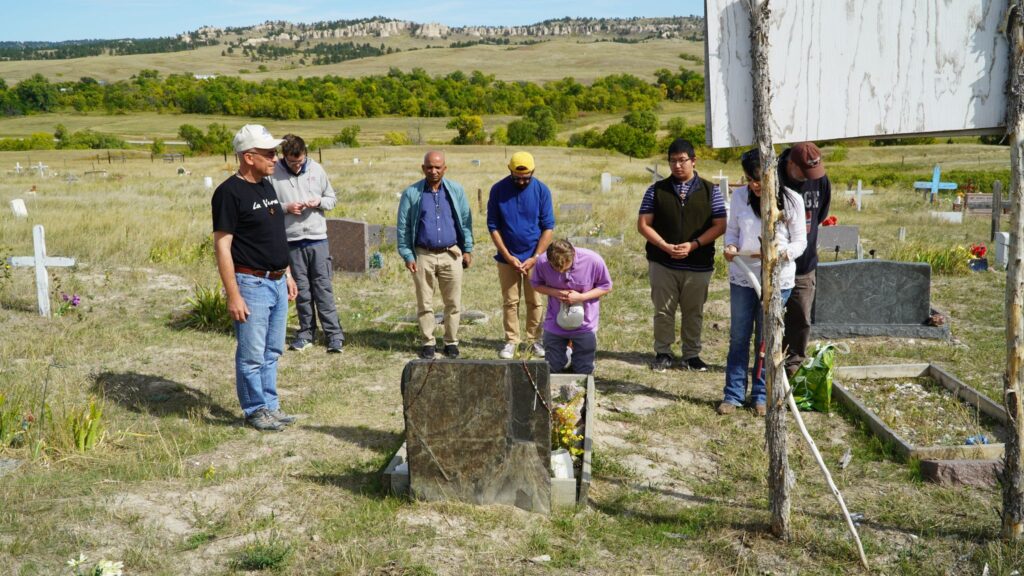