Fr. Tom Cassidy is back in India again, assisting with the district formation program. As during previous visits he is maintaining a daily journal. The following is from an entry posted on the province blog on Monday:

“Yesterday was the dedication of the new bell tower at Sacred Heart Parish in Vempadu. The bishop was going to bless the tower at 5:30 pm followed by a Mass at which he would preside and preach. As Fr. Mariano and I, and a car full of students, were headed to the parish (it’s about 20 miles from the seminary) the skies again took on that menacing look as though Mother Nature was going to provide her own tower blessing. Several of us asked Br. Mary Babu Kota, a second-year student, why he prayed so often for rain!

“The rain did force the Mass inside. The parish church is not very large so many people had to stand outside in the rain. We started with a ribbon cutting (I was given the honor!) followed by the tower blessing and then immediately went into Mass. We may have started about 20 minutes late but we were able to wrap things up by about 7:30 pm. Then we had presentations and thanks. Bishop Jaya Roa Polimera spoke for about 30 minutes. Actually, he spoke and sang. Since he was speaking in Telugu all I could do was listen and enjoy his voice and his engaging of the people in his songs and his talk.

“It is an Indian custom to give a shawl and flowers (they call the ceremony facilitation) to honored guests. After the bishop, I was next to receive a shawl and flowers. Others honored included the couple who paid for the bell. The U.S. Province gave a gift toward the construction of the tower and that’s why I was honored.

“When the pastor, Fr. Jojappa, spoke to me about the desire to build a bell tower I had in mind, well a bell tower, like any you’d see in the United States. However, a bell tower here, at least in Kerala and Andhra Pradesh, is actually a shrine with a bell to Jesus, Mary and the Pieta. I could tell the people were very proud of their new tower and its bell. I don’t know if it will get the parishioners to arrive to church on time, but it will certainly call them to prayer.”

And while Fr. Tom is in India…

Welcome to Frs. Michael Benedict and Dharma, two members of the Indian District who are in the United States for the next month. They are here primarily to learn about fundraising, financial work and administration, but will also tour many of the province ministries. They arrived on September 6 and will be in Hales Corners through the week. On Sunday, September 13, they go to Florida to attend the annual National Catholic Development Conference with staff from the province’s three development offices. September 22-25 Frs. Michael and Dharma will be in South Dakota and October 5-7 they will be in Mississippi.

They will be in the US Province until October 12.

Josephine “Jo” Calcagnino, 61, long-time member of the SHSST staff, died on Saturday, September 5. She retired from her position as executive secretary to the rector several years ago due to health issues. The Visitation will be Wednesday, September 9 from 4:00 pm until the service at 7:00 pm at the Wauwatosa Schmidt and Bartelt Funeral Home.  The family asks that “In lieu of flowers, we would hope that you will do an unexpected act of kindness for someone in Jo’s name.”

A first-of-its-kind exhibit of West African artifacts is now available on-line through the Leo Dehon Library at Sacred Heart Seminary and School of Theology.

The collection of early 20th century royal and ceremonial pieces is from Fr. John Emonts, a German SCJ who served in Cameroon (then “German Cameroon”) from 1912 to 1916. In 1923 he came to the United States to help establish the SCJs in North America.

A ceremonial wood mask, a miniature carved wood throne, an ornate iron spear, and a brass bird-shaped bowl are among the 40 objects pictured and described in the online Cameroon Artifacts Collection. It can be accessed at the Dehon Library website. Click here to visit.

The artifacts can be viewed in-person at the Fr. John Emonts Museum, which houses the collection in the library wing of SHSST. They include pipes, swords, textiles and figurines from the Kingdom of Bamum, the pre-colonial West African state that is now part of Cameroon.

Besides the Cameroon exhibit, the Dehon Library link noted above also has links to resources about Fr. Leo John Dehon.

Last week, SCJs and office directors received an electronic version of the new provincial superior’s photo for use in community houses and offices. The image was of photo-print quality. However, if you would like to have a print made and sent to you, please click here. Note the size of the photo that you need (5×7, 8×10, or?) and whether you need it in black and white or color.

Prints will be ordered on Friday, September 11, and should take about a week to process. Please email your request by the end of Thursday, September 10.

This will be Fr. Ed Kilianski’s last full week at Our Lady of Guadalupe parish in Houston, where he has served as pastor for the past seven years. He leaves Houston on September 17 and plans to be in Hales Corners, ready to unpack, on September 18. The week of September 21 will be his first full week in the provincial superior’s office.

If not a full tour of the world, at least come and sample some of the food and beverages of the world at the annual ESL Cultural Fair at Sacred Heart Seminary and School of Theology.

This year’s fair will be a bit different than the usual lunchtime gathering. It will take place on Friday, September 11, from 3-7 pm in the SHSST dining room. Beverages and appetizers will be available from each of the countries of this summer’s ESL class. Cultural exhibits will also be on display.

As you can see below, work continues on the renovation of the entrance to Sacred Heart Seminary and School of Theology. The new design will allow for added parking near the front door and better drainage for the property. Last week workers set much of the curbing for the new drive. 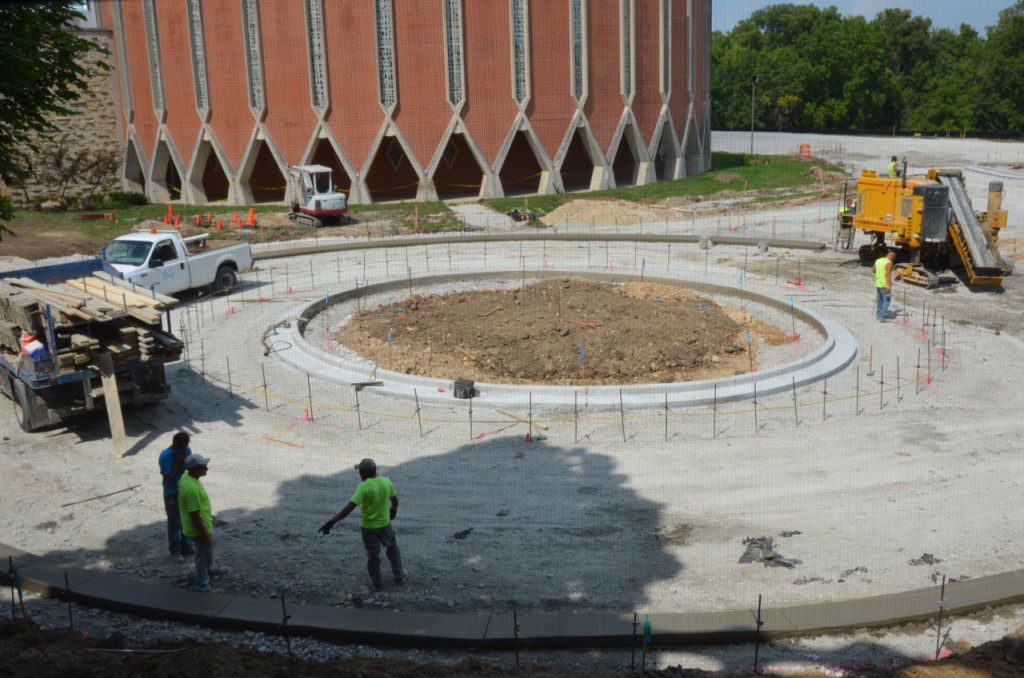