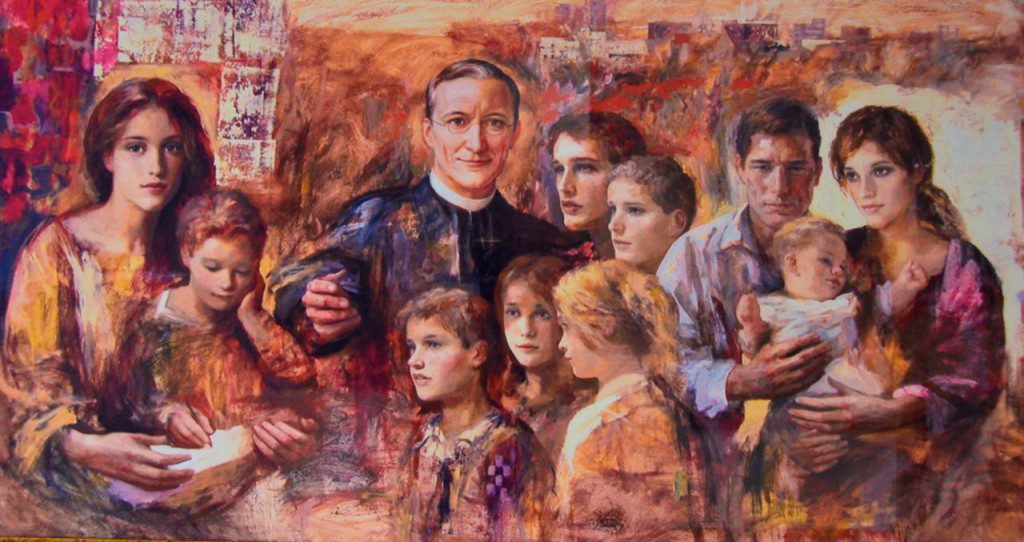 March 14 marks the 172nd anniversary of the birth of Fr. Leo John Dehon, founder of the Priests of the Sacred Heart. Traditionally, the superior general writes a letter commemorating the anniversary. This year’s letter takes on special significance for Fr. José Ornelas Carvalho because it is the last that he writes as general. Fr. Ornelas’ second six-year term comes to an end during the General Chapter.

Picking up on the theme of the chapter (“Merciful, in Community, with the Poor”), Fr. Ornelas focused much of his letter on the concept of “mercy” as a Dehonian response.

“Mercy is not sugary or unseasoned and naïve,” he wrote. “Someone who experiences the merciful love of God cannot NOT be an instrument of this love, particularly in areas where life is threatened, repressed, limited, or wounded. The fact that 100 years ago, Fr. Dehon involved himself – despite the cautions from some brethren – on behalf of a social dimension to our congregation was not the result of a political calculus or sense of moral obligation. It was a response. This response was to that love that was revealed on the cross as the source of life and victory over every death.

“With profound joy, and most respectfully, we see how men and women within the Dehonian Family continually draw their inspiration and are moved by mercy, ready to reach out to the edges of society, as Pope Francis recommends. In an era like our own, burdened with unimaginable violence, who could doubt that the world needs mercy, or, using Dehonian language, the Reign of the Heart of Jesus?”

The North American Sub-Committee on Immigration reminds SCJs in the US and Canada that they will be receiving a reflective exercise to be done on the local level individually and as a community. The committee hopes to get the information out to SCJs via email Wednesday or Thursday, followed up with printed text via “snail mail.”

The most recent SCJ News is in the mail, and also available as a PDF download.

Our apologies to Br. Ben Humpfer, whose name mistakenly appears under a photo of Fr. Joseph George Coppens in the printed version of the newsletter.

+Fr. Onorio Matti, provincial superior of Mozambique, died March 7 in Padua, Italy. He returned to his home country of Italy earlier this year to address several health concerns. On the flight there he had a minor heart attack and was immediately hospitalized. His condition deteriorated and he passed away early Saturday. Fr. Onorio was born in 1951, professed in 1973 and ordained in 1979.

+John “Jack” Burns, the brother of Fr. Tom Burns, died March 7 of cancer. Mr. Burns studied with the SCJs at Dehon Seminary in Great Barrington, PA, and entered the novitiate at Ste Marie in 1959. He left before profession vows and entered the Navy, where he served for eight years as a medic. Click here to view the obituary and funeral information online.

Fr. Ornelas reflects on his 12 years as superior general

In May, 2003, Fr. José Ornelas Carvalho was elected to succeed Fr. Virginio Bressanelli (now bishop of Neuqún, Argentina) as superior general of the Priests of the Sacred Heart. As his second term comes to an end, Fr. Ornelas recently sat down for an interview to reflect on the congregation and his years of administration.

“Teamwork has always been very important to me,” he said. “I can be an impulsive person. It is important to have a team of people in whom you can trust, with whom you can share ideas. And more so, to listen to.”

The idea of “teamwork,” he continued, “is a path we must follow not only here in administration, but throughout the congregation. Soloists can sing beautifully but we are a religious congregation; we must sing as a choir.”

On retreat in India

Fr. Tom Cassidy’s latest blog post is about being on retreat last week with members of the SCJ community in India:

“The retreat ran from Monday, beginning with adoration, and ended on Saturday with an 11:00 am Mass,” he wrote. “There were 15 of us making the retreat for SCJs living in Kerala, though a few came from Andhra Pradesh, and the two cities of Chennai and Mumbai. The retreat was led by Fr. Martin van Ooij, whom I consider the founding father of our Indian District.

“During my first term on the General Council, Indonesia was part of the congregation that fell under my purview. In 1994, when we decided to begin our Dehonian presence in India upon the invitation of the bishop of Kerala, it was important to find someone to spearhead our efforts. It would not be an easy task and could not follow the very successful model the congregation developed in the Philippines due to the difficulty of foreign missionaries entering the country. Fr. Martin was a Dutch missionary working in the diocese of Lampung and by all accounts was just the man who could pull it off.”

Fr. Martin no longer serves in India but has returned several times for district events.

Fr. Stephen Huffstetter is back in the office after a visitation in Texas. This Wednesday he has a meeting with the Sacred Heart Seminary and School of Theology board of directors. Next week, he takes part in the local superiors meeting beginning Monday evening and running through Tuesday, followed by a Provincial Council meeting on Wednesday.

As we noted last week, Bishop Joe Potocnak left Mississippi in February to join the Sacred Heart Retirement Community in Pinellas Park, FL. Before leaving Mississippi he was treated to several going-away parties, including one from the students at Holy Name School in Holly Springs. During Catholic Schools Week the school’s students wrote the bishop thank-you cards in appreciation of something special he had done for them. The photo below is of the bishop receiving those cards.