“Pray! My advice is to stay rooted in prayer and respond with your heart.”

On Saturday, December 17th, Henry Bùi Nguyen, SCJ, was ordained to the priesthood by Bishop Thomas Thái Thành Nguyen, auxiliary bishop of the Diocese of Orange. The ordination took place at St. Columban Catholic Church in Garden Grove, CA, just a few miles away from Fr. Henry’s home parish of St. Polycarp, where he will celebrate a Mass of Thanksgiving on December 18.

Fr. Henry is 33 and professed his first vows with the Priests of the Sacred Heart (Dehonians) in 2018. He has an undergraduate degree in Psychology from California State University in Monterey Bay, and an M.Div from Sacred Heart Seminary and School of Theology.

“I first considered a vocation to the priesthood in my early teens,” said Fr. Henry. “I wanted to be a missionary, although at the time I didn’t really know what that meant, I just felt called to do it.”

But fear of what pursuing a vocation might really ask of him, and concern for his widowed father caused Fr. Henry to set aside his initial call. “I didn’t want to leave my single dad at home.”

In 2013 Fr. Henry began to more seriously listen to that initial call. Four years earlier, he had met Fr. Francis Vu Tran, SCJ, at a leadership conference hosted at St. Martin of Tours parish in Franklin, WI. “That was my first encounter with an SCJ parish.” It later became the first parish in which Fr. Henry would serve as an ordained minister; he did his diaconate internship at St. Martin of Tours and will continue to assist there as a priest.

Fr. Henry became a candidate with the Priests of the Sacred Heart in August, 2015. “The Dehonians stood out to me because of their response to and for the Eucharist. In formation, my religious vocation grew hand-in-hand with my priestly vocation.”

His vocation to religious life and the priesthood has always been rooted in what he says is “a call to serve, to accompany others. Formation solidified my desire to be with and help others. I am called to community life; with the support of my community, I know that I will prosper in responding to the Heart of Christ.”

“I felt the call to bring the sacramental love of Christ to others, to share the fact that our God is a loving and compassionate God,” said Fr. Henry. “We SCJs are called to be servants of reconciliation.”

Fr. Henry credits his father, Douglas Nguyen, for nurturing his faith and his vocation. “My father, since as far back as I can remember, has reminded me of the importance of prayer,” said Henry. “Even when I went to the seminary, was ordained to the diaconate, my dad has continued to remind me to pray. PRAY EVERY DAY!”

His father was active as a Vietnamese language teacher and later as the principal of the Vietnamese Language Program at St. Polycarp church in Stanton. Fr. Henry spent many years in a youth ministry program called the Vietnamese Eucharistic Youth Movement (VEYM); it is what led to the leadership conference that placed him in contact with the SCJs many years ago. As a seminarian, Fr. Henry continued to be active with the VEYM at St. Martin of Tours, serving as assistant chaplain and VP of Academic Affairs. At the national level, Fr. Henry is a youth leader trainer and was a Sub-Committee Lead of Vocations.

As a part of his preparation for final vows and priesthood, Fr. Henry also did a year of pastoral ministry split between Sacred Heart Southern Missions in Mississippi and with the SCJ community in Ecuador.

He was on the SHSST Student Council, volunteered at St. Ann Center for Intergenerational Care in Milwaukee, and assisted with the residential needs of students in SHSST’s English and Cultural Studies program. For the past year Fr. Henry has also served as a member of the communications team that is responsible for the Dehonians’ general website and social media.

His first assignment will be to help other young men with their vocational discernment; as of January 1, Fr. Henry will be the vocation director for the US Province. He will do this with the support of a team of SCJs and lay staff who serve on the Province Vocation Committee. Fr. Henry will also continue to minister at St. Martin of Tours.

“I am excited for this new position,” said Fr. Henry. “In the past year I have taken part in the National Religious Vocation Conference’s workshop (Summer Institute) in preparation for vocation ministry. I have begun networking with vocation directors from other religious communities.”

When asked what advice he would give someone considering a vocation to religious life and/or the priesthood, Fr. Henry echoed his father:

“Pray! My advice is to stay rooted in prayer and respond with your heart.”

CLICK HERE to view PHOTOS of the MASS OF THANKSGIVING 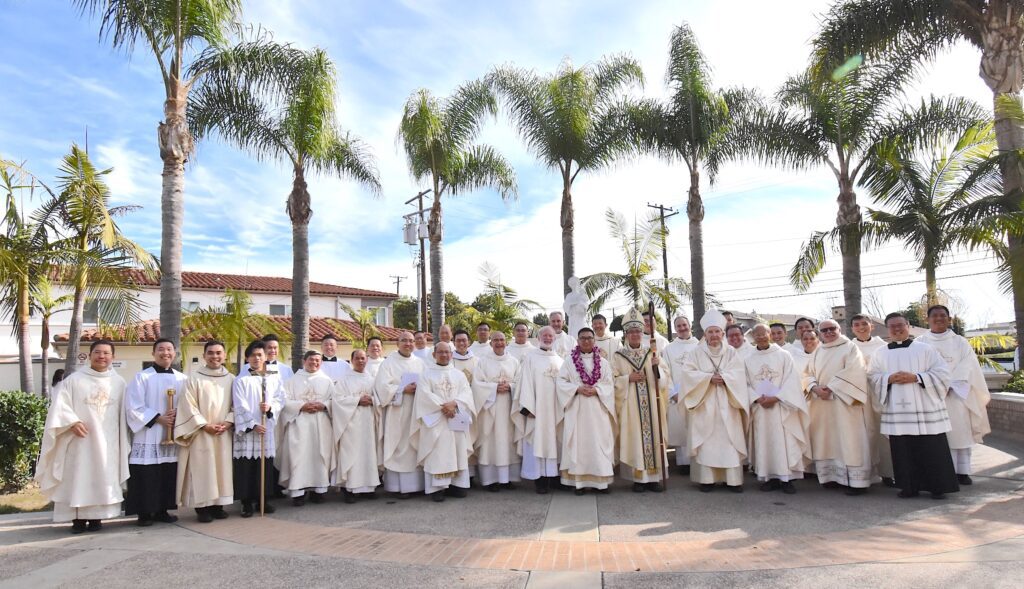