“It was thanks to the intervention of the population, of the neighborhood youth, that the group that attacked the center in October eventually left”

The Priests of the Sacred Heart (Dehonians) have been in Kisangani (DR Congo) since 1897. They have been a constant presence to the people of Congo in the midst of conflict, and even war, a war that claimed the lives of 29 SCJs in 1964.

For many years, that presence has included a 75-hectare piece of land (approximately 185 acres), a parcel that was originally far from the city center of Kisangani. 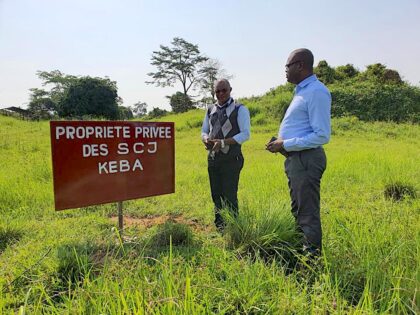 “But with the rural exodus, now the city has grown close to the SCJs’ land and many people want it for their own use,” said Fr. Floribert Bulo Dhelo, SCJ, provincial secretary of the Congolese Province. Fr. Floribert is currently studying in the ECS program at Sacred Heart Seminary and School of Theology.

Located on the SCJs’ land is the philosophy scholastic for the province, as well as the Saint Laurent and Saint Bakhita Center which takes in and cares for abandoned and orphaned children from birth to age 17. “There are approximately 120 children at the center right now,” said Fr. Floribert. “They are totally dependent on the Priests of the Sacred Heart and the goodwill of our benefactors; they have nowhere else to go.”

But many eyes are on the land that houses these homeless children. On June 25, the SCJs had the unpleasant surprise of seeing the bailiffs of the Tribunal of Kisangani come to their property to execute a decision rendered by the Tribunal, dated May 5, 2021. The decision concerned two individuals disputing a parcel of land measuring approximately seven hectares (about 17 acres).

The SCJs took the matter to court noting that: 1) the problem is between two people and not with the Priests of the Sacred Heart, 2) that the area indicated on the report is not that of the Priests of the Sacred Heart but regards another parcel, approximately two kilometers (a little over a mile) from the SCJs’ property, and finally 3) after checking the archives of the Office of the Registrar of Land Titles of the Provincial Government, it was determined that the document used by the Tribunal does not exist; it was a false document.

“Consequently, the place of execution of this judgment is elsewhere and not in the SCJ concession, which has all the land documents in order,” said Fr. Floribert. “It is thus a group of agents of the land services, those of the land registry and urban planning of Kisangani, who constitute a mafia group, in complicity with certain administrative, police and judicial authorities of the Province, thus fabricating false documents in the name of a concession that they aim to steal.” 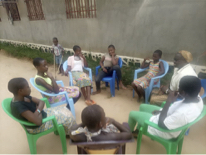 The people seeking to take the SCJs’ land, land that has served as a home to hundreds of homeless children, do not take “no” easily. In June, people with machetes – accompanied by armed police – came on the SCJs’ property for the purpose of seizing a section of it. The SCJs, children and staff wanted to take action but the police, siding with those who sought to seize the land, brandished their weapons at SCJs, and cursed at the children and staff.

The situation escalated on October 9 when the same group from the June attack returned, but this time with more than 40 people armed with machetes, iron bars, sticks and firearms.

“That day, they were ruthless, said Fr. Floribert. “They beat and injured several children, and beat up members of the center’s staff.” The attackers remained on the property through the next day. “During that time, they vandalized, broke and stole items from the center. The children had to be moved for three days, seeking refuge with the governor of the province.” 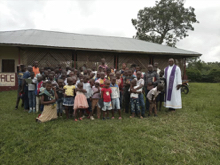 The Priests of the Sacred Heart aren’t the only ones impacted by this. Such land-grabs are becoming more frequent in DR Congo; several religious orders are also fighting to hang on to their land.

“In 2008, we had the same problem with another property that we still have in Kisangani,” said Fr. Floribert. “At the time, to put an end to this situation, we had to close the whole concession [land rights].”

Starting in June, the SCJs have filed papers with provincial and federal authorities, “Including the president!” said Fr. Floribert. Trying to get their message out, SCJs held press briefings, first in July and then in early November. Radio stations, newspapers and websites have carried news of the SCJs’ land dispute and the attacks on the center.

“What is especially frustrating is that the authorities pretend to arrest these criminals, but just hold them for two or three days and then set them free,” said Fr. Floribert. “It is unacceptable what is going on in Kisangani…

“Can we accept such actions? Are we to keep quiet and pretend that the authorities are not involved in this affair? We find it hard to believe.”

The general public supports the SCJs, and in some cases, people from the neighboring area have tried to help fend off attackers.

“It was thanks to the intervention of the population, of the neighborhood youth, that the group that attacked the center in October eventually left,” said Fr. Floribert.

“The public has denounced the situation but authorities turn a deaf ear,” he continued. “But this land has belonged to the Priests of the Sacred Heart for many years; we have witnesses that testify to this fact. But we fight many difficult forces, including corruption.

“May God help us! Please keep the people of Kisangani in your prayers.”

« Previous: A new adventure, this time in South Dakota! Next: The humanity of the homeless captured in paintings »