Frater Duy Nguyen, SCJ, didn’t have to go to far when he joined the province formation program. Born and raised on the north side of Chicago, Frater Duy now lives and studies only a short drive from his childhood haunts.

He first came in contact with the SCJs in 1999 when his family was invited to a gathering at the province’s formation house. “At that time, I did not know who they were or what they were all about,” said Frater Duy. It would be another three years –– at a youth gathering in Toronto –– before Frater Duy would formally meet the community and “eventually discover my calling and the charism of the SCJs.”

He had to go to another country to discover the religious community of which he would be a part, the one with a community house just a few miles from his childhood home.
He professed his first vows in 2006. On January 30, Frater Duy, 31, made his final profession with the Priests of the Sacred Heart during a ceremony at Sacred Heart Monastery.

Before entering candidacy, Frater Duy studied at the University of Illinois in Champaign. He later transferred to the University of Chicago and earned a bachelor’s degree in Information and Decision Sciences (he describes it as a mix of computer and business skills).

Frater Duy has one semester at CTU before graduation. He broke up his studies two years ago with a pastoral year based in Lower Brule, S.D. 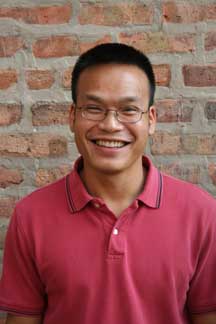 “Amidst the concerns and stresses of daily activities in our lives, whether it’s preparing for the ceremony or completing a ‘to-do’ list before the academic year starts, I’m reminded to focus on my prayer life, to continually foster a deep and real relationship with God.”

It’s a focus that Frater Duy has continued to strive for while completing his studies at Catholic Theological Union and preparing for final vows.

“Before any type of ministry can be done, one must unite with God first,” wrote Frater Duy. “All good works will flow as a result of this union…

“Dehon’s life is proof that union with God is not far-fetched. All it takes is hard work, discipline and the grace of God.”

As Frater Duy prepared to make his perpetual commitment with the community he compared final vows with those first vows he professed in 2006.

“They are the same vows,” he said, “yet they are different. The difference is in commitment. In temporary vows, leaving is always an option if life as an SCJ doesn’t work out, if God calls you somewhere else. In a sense, it’s like test-driving a vehicle. But with final vows, the commitment is life-long.

“It’s a complete dedication to serve God and the Church through the lenses of Fr. Dehon.

“Will I feel different after professing final vows? In substance, I won’t feel any different. I’m still the same person. But my perspective has changed. Being an SCJ and all it embodies is my way life from now on.”