“God has been good to me”

Retired bishop reflects on his years in South Africa 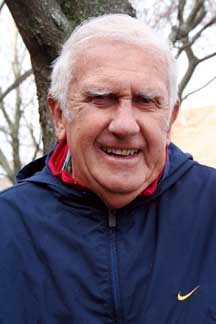 After 36 years in South Africa, the last 17 as bishop of the Diocese of De Aar, Bishop Joseph Potocnak, SCJ (pictured above),is back in the United States for more than just a vacation. He’s doing something he had not given much thought to when he first left for South Africa in 1973 – he is retiring.

At 75, Bishop Joe submitted his retirement papers to the Holy Father, as do all bishops. In July, 2009, another SCJ was named to succeed him – Bishop Adam Musialek. The new bishop was ordained in September. Bishop Joe stayed in De Aar through October to allow Bishop Adam time to visit family in Poland before jumping into his new duties full time. Soon after the new bishop returned to South Africa, Bishop Joe, now 76, headed to the States to spend time with his own family on the East Coast.

The week before Thanksgiving the bishop was at Sacred Heart Monastery, visiting with his SCJ family. While there, he reflected on his years in South Africa and the transition back to the States.

“God has been good to me,” he said. It’s a line he repeats over and over, almost as a reflex action. “I never thought that it was a burden or hard to be in South Africa. The people there are wonderful.”

More American than Catholic
Bishop Joe said that when he first went to South Africa he was “probably more American than Catholic,” meaning that he found himself often thinking as an American instead of as a member of a faith that includes the cultures and nationalities of many. “But soon I came to learn that there are more ways to look at and do things than what I came to know in the United States.”

The opportunity to get to know another culture is something for which Bishop Joe is especially grateful. After tossing out yet another “God has been good to me,” the bishop said that being in a different culture allows a person to look at things from a new perspective and can also “help you to see that people are people; there is goodness in everyone.”

Seeing the basic goodness in others is the rudder that guided Bishop Joe in his ministry in South Africa. “If someone is nice to you, treats you with respect, you pick it up, even if your language is different,” said the bishop. “If you are good to another, that person feels your goodness. The Catholic Church brings a bit of hope to people in need by treating them with respect, by caring for them. Developing a sense of faith is important, and I think the faith is getting deeper in South Africa, but the first thing the Church must always do is be good to others, see the basic goodness in others.”

Bishop Joe said that this philosophy earned the Church respect during the years of apartheid (the government-sanctioned separation of races). “People were supportive,” said the bishop. During the uprisings that led to the end of apartheid Bishop Joe said that he always felt safe. “The people were burning tires in the street but they said to me, ‘Don’t worry,’ and they’d take care of us. During apartheid we [the priests and religious] were generally the only white people who went to the black locations. For a while I was the only white guy living in Graaff Reinat. When there was a big march [against apartheid] I was the only white person marching with them. The people knew that we cared about them and so they cared about us.”

He said that he always felt welcome in South Africa. That is what made two incidents especially troubling for him. Twice in recent years Bishop Joe was robbed. He was stabbed the first time and hit on the head with a brick the second. “Crime has gotten worse in recent years but it is still only a small minority of people who do the crimes,” he said. “The blacks are victimized the most. Many people are trying to make the country work but it is hard when there is a small group of people making things difficult.”

Much is still the same
The bishop saw many changes during his 36 years in South Africa. He came to a country living in the midst of apartheid and then watched as it was dismantled, even serving as a poll monitor in South Africa’s first multi-racial national elections.

He has seen much change, but Bishop Joe said that many of South Africa’s challenges are still the same, especially poverty, unemployment and health care. For the Church, the low number of priests and religious serving in the country is always a challenge.

When asked about his years as bishop of De Aar he says that one of the things he is most proud of being a part of is the healthcare outreach that he helped to initiate. “I was so naïve,” he said. “I thought that the Church could take on health care but I didn’t realize the cost.” Working with a religious sister who had formerly served as a hospital matron (head of nursing), the diocese was able to establish a health care network of counselors and caregivers, along with several hospices. The government now funds much of the work begun by the diocese.

“It is still an incredible challenge for the people of South Africa.”

Hard to leave
The hardest part about leaving South Africa for Bishop Joe is leaving the people, those to whom he ministered and those with him whom he worked.

“It was an honor for me to be a bishop there; I always felt the loyalty and love of the people,” he said. “It was a good place for me to be a bishop because it was a small diocese and I could still be a parish priest. The bishops I served with in South Africa were good. They were working guys; pastors like me.”

Leaving a country that has been home for 36 years takes some getting used to. Bishop Joe is spending his first months back in the States visiting friends and family. Although he had thought of moving to Sacred Heart Monastery, Wisconsin’s winters have scared him off for now. Most likely he will join the retirement community in Pinellas Park, Fl. He hopes that he can do hospital chaplaincy. “I love to visit people; I love to shake their hands and talk to them. I guess that I should have been a politician,” he jokes.

Although he is looking at a variety of possibilities, Bishop Joe said that he could be happy anywhere in the province. “We are so blessed here, we have so much,” he said. And then it came again,