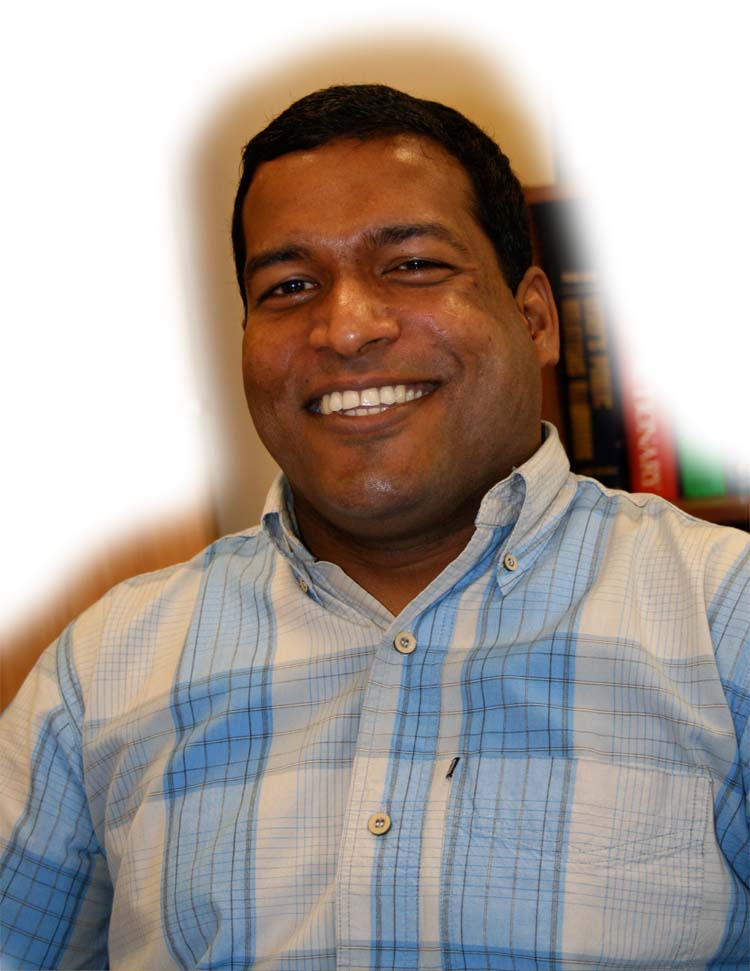 So what is it like to be a pioneer?

“Good,” said Fr. Placido Rebelo, SCJ, though he doesn’t label himself as a pioneer. “I have a missionary spirit and I saw an opportunity to give. Of course, there was a sense of adventure as well.”

In 1999, Fr. Placido and his classmate, Fr. Louis Mariano Fernandes, SCJ, professed vows with the Priests of the Sacred Heart, becoming the first indigenous members of the Indian District. They were also the first Indians to be ordained to the priesthood for the community.

Fr. Placido, 36, was at the University of Bombay, completing a master’s degree in political science when the associate pastor at his family’s parish spoke to him about the about the SCJs.

Coincidently, the associate pastor was a friend of Fr. Adrian Borst, SCJ, formerly a member of the SCJ General Council. Another coincidence –– it was through publications printed by the U.S. Province that Fr. Placido become familiar with the Priests of the Sacred Heart.

“I read the literature and was impressed by Sacred Heart spirituality,” said Fr. Placido. “It focused on what God is doing for you, how God welcomes you and how sensitive and concerned God is for you as a person. That impressed me.”

He did a discernment retreat with the Jesuits but didn’t feel that his call was with them. “What is the Holy Spirit telling you?” the director asked Fr. Placido near the end of the retreat. “I said ‘Nothing Father!’ I needed more time.”

In the midst of all this, Fr. Placido received a letter from Fr. Thomas Garvey, SCJ. Now deceased, Fr. Tom –– formerly provincial superior of the U.S. Province –– was one of the first members of the newly forming Indian District.

“I was impressed by the letter,” said Fr. Placido. “He told me that the SCJs were just beginning in the country and he offered to come and visit me. I thought that this was very touching – that a vocation director would come to see me.”

Eventually, Fr. Placido visited the SCJs in Kerala where Fr. Martin van Ooy and Fr. Tom were laying the groundwork for the district. Living in destitute housing on loan from the diocese, Fr. Placido said that while the accommodations were not too welcoming, the SCJs were. “I was touched by their spirit.”

There are now nearly a dozen ordained Indian SCJs. Fr. Placido emphasized that while they are members of the district, they professed their vows with an international congregation.

“This is so primary to who we are,” said Fr. Placido. “My formation program has been an international experience. It seems natural that we think of ourselves as part of a worldwide congregation. We cannot simply be Indian SCJs responding to the needs of India, we are Priests of the Sacred Heart.”

This sense of being an international congregation was reinforced for Fr. Placido when he read the letter from Fr. General following the SCJ conference on “Mission Ad Gentes” held in Poland. “Fr. José Ornelas Carvalho appealed to the confreres to consider seriously the option of offering ourselves for international missionary projects and communities,” he said.

But there are also many needs in India, needs to which Fr. Placido believes the Priests of the Sacred Heart are uniquely qualified to respond.

“When the bishop invited the SCJs to India, he was probably thinking of the traditional Sacred Heart devotion and spreading that in India,” said Fr. Placido. “It’s important to share that devotion. However, we have reflected on our presence in India and we believe that we must also focus on social justice ministry.” Social justice, he added, is an expression of the love of the Sacred Heart.

This begins at home. “Social justice means that we are just to our students and just to our employees,” he said. This may seem like a simple commitment –– a motherhood and apple pie statement –– but Fr. Placido noted that “in the context of India’s extreme poverty it is easy to exploit laborers.” Such exploitation is often considered “business as usual.”

“In India, to be just is to be prophetic,” he continued. “We can contribute to the emancipation of women, to the development of children and their education. There is so much child labor. We can do much to preserve the healthy indigenous traditions of India while also addressing social ills…

“There is a mindset in India of giving into fate, of maintaining the status quo.” Ministry can be very paternalistic. “It is much easier to feed the hungry and cloth the naked than it is to empower the hungry and the poor or to ask why they are poor. But this is what we must try to do.”

When more indigenous SCJs are ready for ministry, Fr. Placido believes that the community will be able to make a greater impact on issues of social justice. Government structures limit what a foreign-born SCJ can do. Also, there is the reality that people might often respond better to someone who has a background similar to their own. Anyone who has lived in a foreign country knows that understanding a culture different than his or her own requires much more than knowledge of language. “You can understand the words that a person has said without necessarily knowing what the person MEANS,” said Fr. Placido.

However, being an Indian citizen doesn’t automatically mean that a seminarian from one section of India has an understanding of the culture and needs of people living in another area of the country.

“We send our seminarians out into the field,” said Fr. Placido. “We have them live in the homes of poor villagers so that they can get an insight into their lives and their needs. Seminaries can become formation islands, ivory towers that are removed from society as a whole… it can be easy to focus on getting your collar and shiny shoes. In our formation program in India, we want our seminarians to experience a variety of realities and a variety of needs.”

Fr. Placido reflected on India and the SCJs presence there while visiting Sacred Heart Monastery/School of Theology in August. He was in the United States for a summer course at Harvard University. Living and ministering at a parish near the university, he said that it was an excellent opportunity for him to experience American culture and the Church in the United States first-hand.

“The liturgies and pastoral life are very beautiful here,” he said. “I have been impressed by people who want to learn their faith; they want to learn to pray and how to pray meaningfully.”

He said that he was also impressed by Sacred Heart School of Theology. Arriving at the start of the new school year, he had the opportunity to visit with both new and returning students. “Many told me how they were affected by and impressed with SCJ spirituality,” he said. “They embrace the spirituality of the Sacred Heart and leave the school as pastors with a compassionate heart. What could be a better service to the Church than to give it loving, compassionate pastors?”

From the United States Fr. Placido flew to France, where he will study for another two months before returning to Rome to complete his post-graduate studies at the Pontifical Biblical Institute. His focus is on Biblical exegesis.

And then, it’s back to India to help with the development of the district. He anticipates that he will be teaching but “I am open to anything, offering whatever I can to help our presence in India, and help the people of India.”

« Previous: “God has been good to me” Next: Indonesia to American West »