“I tell people that I never saw anything in Fr. Dehon’s writings that was only for Catholics. His social justice concerns, his concern for all people; this is what inspires me.”

“I am a different person, a better person, for having been here,” said Deborah Kosut as she reflected on her 27 years at Sacred Heart Seminary and School of Theology. After serving in many roles at the seminary, she will retire at the end of June.

Several long-term SHSST staff are retiring this year; they were honored at a special dinner in spring. But Deborah wasn’t among them. It’s not because she isn’t appreciated by the seminary community – far from it. 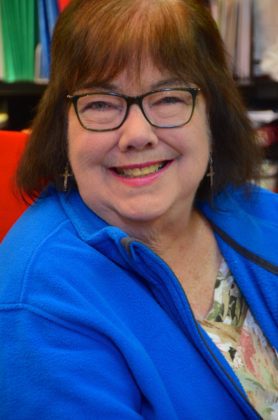 The reason that she wasn’t honored with the other retirees was that the Sacred Heart community didn’t realize that this would be her last semester. Actually, she didn’t until early June.

For the past year, Deborah has been battling multiple myeloma, a cancer of the blood. She has been on chemotherapy treatment since July, 2017, and had a few hospital stays since her diagnosis last summer. But it isn’t a decline in Deborah’s health that led to her unexpected retirement.

It is because she has shown signs of improvement.

In early June she learned that her cancer markers had gone down significantly since the last test in January. This doesn’t mean that she is cured, but it does mean that at this moment she is doing better. Her body has an opportunity to rebound from both the disease and its rigorous treatment.

“I still have terminal cancer,” she said. “I wasn’t supposed to see last Christmas and I don’t know if I will see the next one.”

For Deborah, the improved blood marker was a sign, a gift from God. She finds great joy, and a sense of mission in her work at Sacred Heart. But now, Deborah believes that it is time to focus her energy on her health.

“My job now is to stay in front of the cancer,” she said. “I don’t have delusions; I’m not saying that I’ll ‘beat’ cancer. But I want to be as healthy as I can and enjoy things, like sitting in my yard on a summer morning and watching the dogs play.”

Cancer isn’t a zero-sum game for Deborah. It’s simply the path upon which she is now walking. “It has been such a learning experience,” she said. “It is an interesting and beautiful journey.”

She credits the Priests of the Sacred Heart, the SHSST community and Fr. Leo John Dehon for allowing her to see the beauty in a very challenging journey.

People ask her how she keeps going in the midst of a terminal illness. She said that there are several things that help her, but first is her faith and the support that she receives from others based in their own faith. “When someone says that he or she is going to pray for me, that really means something to me,” said Deborah.

Deborah started working at SHSST in 1991; however, it wasn’t until she was asked to organize a visitors’ center at the seminary that she really came to know Fr. Dehon. She, with volunteer assistance, would lead tours of the school. To prepare, she said that she read everything that she could find on Fr. Dehon and the history of the Priests of the Sacred Heart. “I was moved and guided by what I learned about him,” she said. “It enhanced my faith life; just being here in this community, with the SCJs, has made my faith so much stronger.”

In saying that, she emphasizes that she is not Catholic. Deborah is very active in her Lutheran church and has been for years.

“I tell people that I never saw anything in Fr. Dehon’s writings that was only for Catholics,” said Deborah. “His social justice concerns, his concern for all people – this is what inspires me.”

Being surrounded by a community based in faith – the SHSST community – has been instrumental to her.

When she began at SHSST she only planned to stay for a year or two. She and her husband Garry, who also works at the seminary on its support staff, planned to build a house about an hour away in Hartford. After moving, Deborah was going to get a job closer to her new home. But soon, she felt that her home was at Sacred Heart. Her house would have to remain close to it.

She and Garry scrapped plans for the building project and bought a house just a short drive from SHSST.

For Deborah, her work at SHSST has felt like the fulfillment of a mission. After her diagnosis last summer, Deborah felt that it was important that she continue that mission.

“I wanted our students to experience working with someone like me, someone with a terminal illness,” she said. “I want them to be able to go back to their dioceses, to their local ministries, and be able to help people like me live life to their fullest even when faced with a major illness.”

Faith and a sense of purpose are two of the things that Deborah said are key to her well-being in the midst of cancer. Also vital are friends, family and co-workers. “It is important to be thankful, to allow others to help you and to simply accept their help and say ‘thank you,’” she said. She first learned this years ago when the SHSST community helped her through her first bout with cancer. “It was like I was embraced and supported by a giant set of hands; I felt the full support of the Sacred Heart community.”

And then out of nowhere, Deborah tosses out a few corny jokes. “That’s another key to living with cancer,” she said. “A sense of humor. You have to have it.”

After 27 years, Deborah is getting ready to leave SHSST. Perhaps “leave” is the wrong word. She will no longer be on the SHSST staff, but she will always feel at home at the seminary. “I hope to volunteer, to help as I can,” she said.

“I have grown so much here,” she added. “I am so grateful, so changed for having been a part of the Sacred Heart community.”

« Previous: Celebrating and remembering Next: Ordained to the diaconate! »