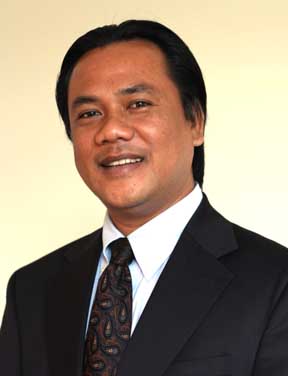 As a child, Fr. Christianus Hendrik, SCJ, read books about the American West. Karl May, a German author well-known in Europe for his stories of an Apache chief, was a favorite. Through the books, Fr. Hendrik developed a child’s impression of the West, filled with cowboys, Indians, horses and buffalo.

Until a few months ago, he never thought that he’d experience the American West first-hand. Now, he has not only visited South Dakota but hopes to minister there as a member of the Lower Brule Pastoral Team.

Quite a change from where Fr. Hendrik first learned of the United States: his hometown of Palembang, Indonesia.

Fr. Hendrik, 39, is a member of the Indonesian Province and since August, has been a student in Sacred Heart School of Theology’s ESL (English as a Second Language) program. Hoping to serve as a missionary, perhaps in the Philippines, he came to Sacred Heart because “English is like a gate that allows me to participate more widely in the missions.”

Professed in 1990, Fr. Hendrik has known the Priests of the Sacred Heart all of his life. His home parish was served by SCJs and it was their example that inspired him to pursue a vocation.

“I had a dream to be like them, it was just a child’s dream at first, but they were such good examples,” said Fr. Hendrik. “They were very kind.”

When an SCJ asked if he would like to join them, he immediately said “Yes!”

“But I didn’t know what that meant,” said Fr. Hendrik. “And I didn’t really realize what it did mean until I was in the fourth year of my studies at the seminary!”

Fr. Hendrik’s vocational path was confirmed after he went through a reconciliation with his father. The two were estranged when Fr. Hendrik first came to the SCJs. With the help of Fr. Hendrik’s SCJ spiritual director, father and son were able to come together and be at peace with each other when Fr. Hendrik was in the seminary. “I learned that forgiveness brings freedom to my life,” he said. It was through that reconciliation that he came to know the meaning of the love of the Sacred Heart. “I wanted to offer my life to that reconciling love.”

Ordained in 1998, Fr. Hendrik did his seminary studies in Yogyakarta, Indonesia. “During my studies I always thought about working among people in a parish, working with youth,” he said. “I like to teach, but not necessarily in a school. I like to teach in my parish work.”

His first assignment was in a small parish on the border between South Sumatra and Bengkulu. He was there for four years before serving as the director of a retreat house in Palembang and later, in Lampung. His last year of ministry before coming to Sacred Heart for ESL studies was as a missionary in West Papua. He loved his work as a missionary priest, but malaria cut has assignment short.

Once recovered, he was anxious to get back to the missions. His superior suggested that he go to the Philippines. Fr. Hendrik said that he is “always ready to be sent wherever God leads me.” He was happy to go, but first needed to improve his English skills. Of course, that is what led him to Sacred Heart School of Theology in Hales Corners and the ESL program.

And Sacred Heart is what led him to South Dakota.

While Fr. Hendrik was learning English in preparation for the Philippines, the U.S. Province was trying to find a solution to its personnel concerns in South Dakota. Fr. Tom Cassidy, SCJ, provincial superior, was in communication with the Indonesian Province. Would Indonesia be able to spare a few men for reservation ministry?

Fr. Hendrik was encouraged by both his provincial superior, and his classmate, Fr. Yulius Sunardi, SCJ. “Fr. Nardi,” as he is generally known, is a member of the Sacred Heart Monastery community while doing doctoral studies at Marquette University. In Indonesia he was also a classmate of Fr. Hendrik’s. The two were ordained together.

It didn’t take much encouragement. Fr. Hendrik was quick to say “yes” to South Dakota. On spring break he traveled to Lower Brule, S.D., to learn about the ministry first-hand. “I like the place; I like the people and the community,” he said after the visit. “With God’s help I say yes to South Dakota; 100% yes!” That is, of course, if all the necessary government paperwork for his time in the States goes as planned.

How will he prepare for South Dakota? Fr. Hendrik believes that much of what he already has done has been good preparation. “God has worked quietly within me starting with my ministry in a small parish in Sumatra among the native people; then in the mission of West Papua,” he said. “All of my formative experiences have helped to prepare me for this, going back to my reconciliation with my father.”

That’s not to say that Fr. Hendrik believes that he knows everything that he needs to know about his South Dakota, but he feels confident that he has the tools to embrace it and be of service to the Church. “I go to South Dakota knowing that I need to listen and learn from the people of Lower Brule. One must listen for those things that are often not heard, see things that are often missed and feel what is not easily understood about a culture different than your own. That is how to be a missionary, to be present to the people, learn from them and then respond.”

Fr. Hendrik hopes to move to South Dakota sometime this summer. He will first complete his ESL studies at Sacred Heart and then return to Indonesia briefly to finish his immigration paperwork and pack his belongings. “I thought that I was coming for just a few months of language study; I didn’t pack with the intention of staying much longer,” said Fr. Hendrik.

The Indonesian Province hopes that more of its members will be able to experience South Dakota.