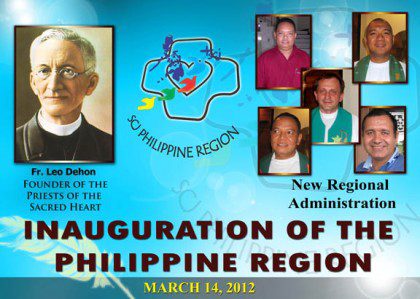 Celebrating the growth of the congregation

As we noted earlier in the week, Founder’s Day, March 14, was chosen to inaugurate the new Philippine Region.  Fr. Andrew Sudol, a member of the region, shares the following from today’s celebration:

At the center of this celebration was a Eucharist celebrated by many priests from the Philippines and abroad. The main celebrant, Fr. Claudio Dalla Zuanna, vicar general, who came as the delegate of Fr. General, officially inaugurated the region and installed the new regional administration. [Fr. Tom Cassidy, provincial superior of the U.S. Province, was also present.]

During the mass, after the gospel, Fr. Francis Pupkowski, the new regional superior, made his profession of faith, and together with his council, was installed for a three-year term.

March 14 is traditionally marked as a day of acceptance of new postulants to the formation program as well as a day of accepting new Dehonian youth. Therefore, after communion, six candidates were accepted to postulancy and 12 young men and women dedicated their lives to the Sacred Heart. They will study and follow the charism and way of life of Fr Dehon.

This meaningful celebration ended with a dinner and a joyful gathering of all the priests, brothers and friends.

There are 20 missionaries working in the Philippine Region from seven countries. Among them there are already seven young local priests, two deacons and 25 young religious in temporary vows. The region includes seven communities, three formation houses and five parishes. There are also social projects, many students on scholarship, and lay and young Dehonians who take an active part in the work, projects and SCJ missions here.

The Sacred Heart Formation House in Cagayan de Oro is our center for candidates who apply to the congregation.  We have three stages of initial formation: pre-college, aspirancy and postulancy. There are  together 57 students in this house. In Manila is the scholasticate with 20 students of theology in temporary vows.

The SCJ Philippine Region is open to our other entities in Asia and throughout the congregation. Thus, there are many students from Vietnam and India here for their initial formation and studies, and a few religious from Indonesia and other countries who spend their sabbatical time in Manila. The region is also a place of preparation for missionaries who will go to other areas in Asia.

We are glad that we can be helpful to others, especially those who seek  advanced study and formation. In this way we fulfill the wishes of our founder, Fr. Leo Dehon, and Bl. John Paul II, that the Philippines becomes a center and a source of evangelization of Asia. 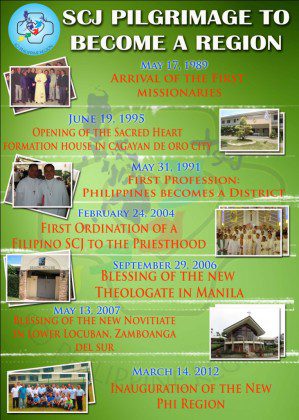 « Previous: Dehonian presence grows in the Philippines Next: Founder’s Day celebrated at SHST »