On Thursday, December 10, an airlift of Syrian refugees is scheduled to arrive in Toronto. A second flight is expected to land in Montréal on December 12. These are the first steps toward the Canadian government’s goal to resettle 25,000 Syrian refugees by the end of 2016.

Among the many who are stepping forward to greet the Syrians are the parishioners of Resurrection of Our Lord parish in Ottawa. The parish is ministered to by the Priests of the Sacred Heart; Fr. Greg Murray, SCJ, is pastor.

The growing refugee crisis has been a daily media topic in recent months. It fills the rhetoric of world leaders and of those who hope to hold elected office. It has been a topic of discussion in schools, offices and around kitchen tables throughout North America, throughout the world.

Where should the refugees go? How should they be vetted? What is the cost? These are the questions that are debated when looking at refugees as a single issue, “refugees” as a topic instead of refugees as individuals.

For the past four years Resurrection parish has gotten away from the noise of the refugee debates and put their energy into helping families, one at a time, to resettle in Canada.

The effort began with an idea from a parishioner, Karen Mahoney. She was inspired by a class she took during her studies for a master’s degree in Religious Education. In it, she learned about the increasing need for sponsoring organizations to help refugees resettle in Canada. She wanted to personally do something to help.

It was good timing –– soon after, the Catholic Center of Immigration asked the parish about the possibility of becoming a sponsoring community for a refugee family.

Karen approached the pastor at the time, Fr. Paul Tennyson, SCJ, and found him very receptive. They brought the idea to parish leadership, who quickly embraced it. The parish not only agreed to sponsor a family, but requested that they take one that would be particularly challenging to place.

Resurrection was matched with the Yalda family, an Iraqi mother, father and three children who fled the violence of their country for Canada via Syria.

Without knowing fully what they would be getting into, the parish community eagerly jumped in to help. As Fr. Paul explained, “You can never anticipate everything, so the only thing to do is to trust God and wade in.” Karen said they broke each task into small pieces, and looked to identify parishioners with different gifts to help. The response was wonderful, she said, with 25-30 parishioners assisting with the program over the years.

Watching the sponsorship team “work together, realizing they were doing God’s work and putting their faith into action,” said Karen, was one of the best things about the experience for her.

Sponsorship requires that an organization (a parish, in this case) commit to providing for the needs of a family in its first year of resettlement. For a family of four, the estimated cost is $30,000.

Resurrection has never had a problem finding the financial support needed for sponsorship. Parishioners gave above and beyond their regular parish stewardship commitment.

Within a year the Yaldas were self-sufficient. Last year, all members of the family became Canadian citizens; they now live in British Columbia. They left Ottawa truly feeling like a member of the Resurrection parish family after having worshipped with the community and taken part in many of the parish’s activities.

Two years after sponsoring the Yaldas, the parish decided to sponsor another family, this time through a blended, government-private program. The Marips (mother, father and son) were Burmese, and unlike the Yaldas, not Catholic. Again, support for the family was easily found in the parish community.

This year, the parish is accepting its third refugee family. The Al Fazaas, a family of five fleeing the civil war in Syria, is expected to arrive in Canada soon.

When asked what the most challenging part of being a sponsor is, Karen said that it is the long process –– up to ten months –– that a family must go through before being assigned to a sponsor. That said, she also noted that the Canadian government has been a good partner with which to work.

Initially there were a few parishioners who had hesitations about the project but after meeting the families most were won over by their stories and quickly expressed compassion and support in assisting them on their journey.

Karen believes that as people continue to hear refugees’ stories and discover that most are “hard-working people just like us, who want a better future for our kids,” they will come to think more deeply about things like national policies and alternatives to war. Fr. Paul believes that the Post-Traumatic Stress that Syrian refugees may experience will make ministering to them more challenging, but perhaps help others become more sensitive to the reasons people are fleeing their homelands.

Asked by the Archdiocese of Ottawa to meet with other parishes about refugee sponsorship, Karen said that she has found many to be hesitant, not necessarily because of who the refugees are but because the undertaking may seem large and complex.

“We don’t deny that it is,” said Fr. Paul, but he, Fr. Greg and Karen agree that the benefits far outweigh the challenges. They see a real spiritual value to a parish getting engaged in this way, from the joy of seeing the Yaldas at Mass, to the impact on stewardship of time, talent and treasure and commitment to mission. For some people, it was their first time becoming active in the parish outside of weekend liturgy.

What advice does the Resurrection team have for parishes considering the sponsorship of a family? Karen said that the first step is leadership; although he does not need to be the one doing the hands-on work, the pastor has to be in support of the idea. He can then encourage the sponsorship program in the parish and affirm the work of those involved with it. Pastors are also able to look at parish resources –– financial and personnel –– and make a personal invitation to people, asking them to get involved. Parishioners who have backgrounds in real estate, teaching and medicine are among those who are especially useful in helping a family to resettle.

Another important volunteer need is people who are simply “sociable,” people who are willing to make visits and give the family members a chance to practice their English.

Karen said that only five to eight people are needed to manage the sponsorship program, but that the participation of others is always an asset.

Fr. Paul urges all parishes to consider sponsorship. Sponsoring a refugee family “is one of the best things a parish can do” to revitalize itself, he said.

Karen Mahoney welcomes questions about parish sponsorship. She can be contacted at: karen.mahoney@rogers.com.

Interviews by Mark Peters with Karen Mahoney, Fr. Paul Tennyson and Fr. Greg Murray, contributed to this story. Mark is the director of Justice, Peace and Reconciliation for the US Province. 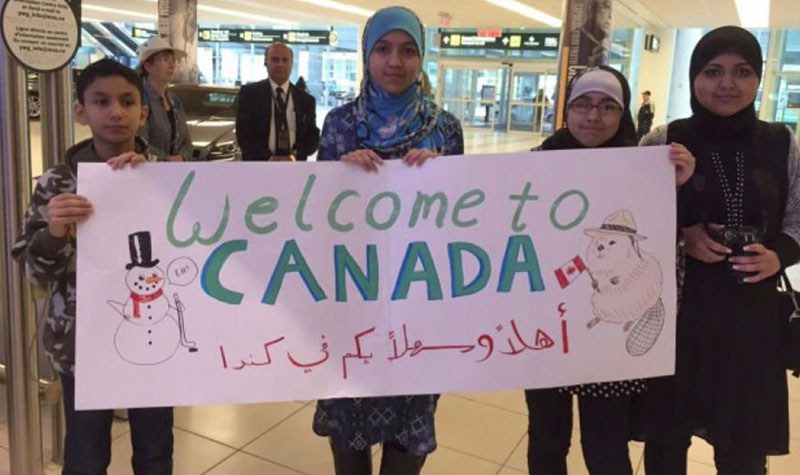 « Previous: Seminarians team up with Toronto SCJs to lead youth retreat Next: We must commit ourselves to compassion and courage »