“We are restoring humanity,” is how Sr. Norma Pimentel, MJ, describes the work that she and others do at the Humanitarian Respite Center in McAllen, Texas.

Executive director of Catholic Charities of the Rio Grande Valley, Sr. Norma was the main speaker at the Dehon Lecture at Sacred Heart Seminary and School of Theology on April 10.

Since 2014, she and volunteers from every faith community in the area, plus civic and business leaders, have assisted migrants on their asylum journey. She insists that it is the responsibility of all Americans to help in this migration crisis.

“We need to go to sleep at night tired from doing good, from doing more than the bare minimum,” said Sr. Norma. “It is a wonderful feeling to know that you have done God’s will… We must seek to quench the thirst of Jesus in every person. Don’t say to yourself, ‘Oh, someone else can do this better than me.’ All are called to help others.”

How? “Start by finding the things that we all have in common… we must remind each other that we are one family, one human family.”

Sr. Norma begins her call to others by sharing her own story, starting with her vocation to religious life. As a child, she loved art and had aptitude for it; she hoped to one day get a degree in fine arts.

In the midst of trying to find a way to make her dreams of college a reality, she agreed to go to a prayer meeting with friends.

“They were going to Pizza Hut after; that was really my motivation,” she laughed.

During that meeting “God introduced Himself to me,” she said. “It’s hard to explain, but from that moment on I wanted to be immersed in His presence.” She met a religious sister who invited her to a vocation retreat and didn’t look back. A few years later, she joined the Missionaries of Jesus.

The religious community is located near the US-Mexican border and often was asked by border patrol agencies to assist in caring for migrant families. “From day one these migrants were a part of my religious life,” she said. Sr. Norma heard their stories, knew of the atrocities that many faced in the midst of violence and war.

When she was asked to join a group that was protesting US support of some of the situations that led to conflict in Central America, Sr. Norma agreed and went to the congressman’s office where the protest was taking place. But instead of seeing the congressman, she saw the police who told the protesters to leave or they would be arrested.

One of her fellow sisters said that they couldn’t just run away when things got difficult, otherwise “we really don’t stand for anything or anyone.” Sr. Norma thought of the many refugees she had met, the people whose lives had been directly impacted by civil unrest.

And so she stood her ground in the face of the police “and that was very hard for me, it went against everything that I was taught,” she said. “I was raised to obey the law and if an officer told me to move, I moved.

“That moment defined me, helped me know who I am. I realized that I had a mission in life. I knew that I had to stand up and speak to what I thought was right.

“We all have those moments. I hope that you don’t miss yours. When God presents you an opportunity to find yourself, say yes.”

We are all immigrants

Throughout the day of the Dehon Lecture, participants heard the stories of other migrants. During the midday Mass, Fr. Vien Nguyen, SCJ, shared his own story.

“My journey to the United States began with a small fishing boat,” he said. “Because of the effects of war, communism, and poverty my mom arranged to have everyone in the family leave the country one by one. At the age of 14, I left Vietnam with my aunt and 37 other people, crossing the South China Sea to the Philippines, on a fishing boat that was about six feet wide and 20 feet long.”

Fr. Vien spoke of the challenges of being a person who straddles two cultures, but who is not fully at home in either. “By now you know that I speak English a little funny,” he said. “The irony is that I speak Vietnamese a little funny too.”

As did Sr. Norma, Fr. Vien invited all people to respond to the current migration crisis and to do so because of their Christian faith.

“In an era that has become increasingly anti-unauthorized-immigrants, the Church is inviting us to respond in a way which is human, just, and fraternal,” he said. “The Church is inviting us to care for those on the margins, which was the passion of our founder, Fr. Leo John Dehon, and is the mission of the Priests of the Sacred Heart. It is also the commitment of the seminary’s sponsoring dioceses and religious communities to care for our neighbors, as we do for ourselves, by providing legal and social services for immigrants.”

The Dehon Lecture concluded with a panel discussion in which four diverse people shared their immigration stories including Frater Paul (Phong) Hoang, an SCJ seminarian who, like Fr. Vien, is a Vietnamese immigrant; Regina Bakala, an immigrant from the Democratic Republic of Congo who was nearly deported back to the country where she and her husband had been tortured; Irma Melchor, an immigrant from Mexico, and Fr. José Gonzalez, a Milwaukee priest who served as Irma’s translator and who also shared his own story of being impacted by the concerns of migrants. He has served in Hispanic ministry in Milwaukee and is also an associate director of Human and Spiritual Formation at SHSST.

“We have a moral obligation to be on the side of the poor,” said Fr. José. “The Priests of the Sacred Heart have a beautiful charism that speaks to this.” As he reminded SCJs during a presentation last year:

“As Dehonians, you must remind us that there is a heart. You are called to be bridge-builders among cultures calling forth the beauty of humanity and yet it is so hard to do.” 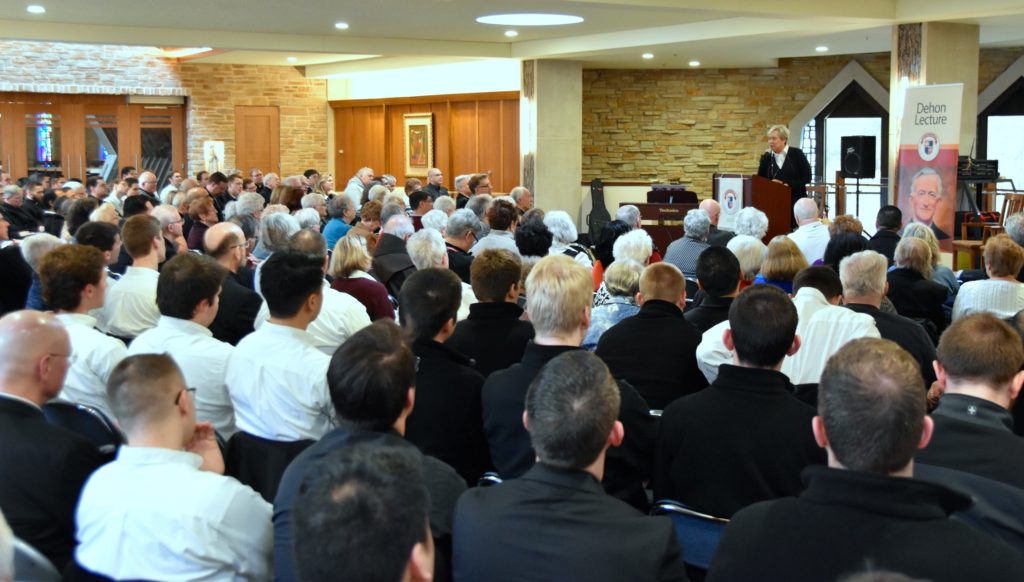 « Previous: Expanded program for growing needs in the Church Next: Happy Easter! »