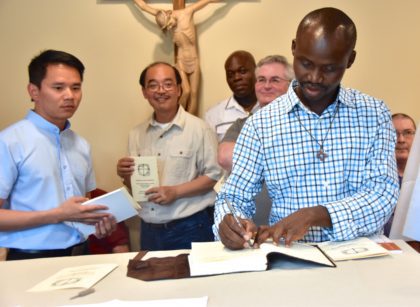 Originally from Togo, but now a US citizen, Hubert entered the formation program in Chicago in January, 2017, and was a student at St. Xavier University. He is 37.

Reflecting on his vocation, Hubert said that “During my teenage years, I thought a lot about how I wanted to change the world. Growing up, I finally discovered that I could not change the world, but that I can BE the change in the world by the way I live my life. I have a devotion to the Sacred Heart of Jesus and so I am attracted to the fact that to be a Priest of the Sacred Heart is to be a ‘Prophet of love and servant of reconciliation.’ This really fits my call, and I think it can help me to BE the change in the world.

“If become SCJ – by the grace of God – I do believe that I can fulfill this goal. By reflecting the love of the Heart of Jesus by the way I live, I would like to stand up for those who feel abandoned, for those who feel that they have no one in their lives. I want to seek justice for the poor, console broken hearts and try to reconcile people.

“I want to show the world a compassionate heart, a heart of a mother.”

Angel, 34, is originally from Chihuahua, Mexico. Before entering formation he worked in the legal profession. As a member of the Dehon Formation Community, he studied at Catholic Theological Union in Chicago.

“I am very happy to be able to enter the Novitiate because it is a moment to pray more intensely so that I may discern the path of my vocation,” said Angel. “I think it is important to study the congregation, its history, the charism and the founder, Fr. Leo John Dehon. This represents not just the Priests of the Sacred Heart, but the Catholic Church itself as one sees how a person can participate in ministry in service to God, living as a vowed religious. I believe that it is important at this stage of formation to be mindful of three elements: study, gaining knowledge, and discernment. All of this is done under the light of the Holy Spirit.”

John Huan Nguyen, 31, is a novice from the Vietnamese District; however, this isn’t his first time in the United States. Last summer he was a student in the ESL program at Sacred Heart Seminary and School of Theology. Originally from Hanoi, John became a candidate in Vietnam three years ago and has studied philosophy. After novitiate, John will begin his theological studies at SHSST. Fr. Francis Vu Tran, SCJ, district superior, was present for the ceremony.