Last week, those in formation – both students and formators – were on retreat together at the Siena Center in Racine. The retreat was based on the “Open Hearts” North American Dehonian retreats held in Canada and the United States during the past year. Each day was devoted to one of five themes from Dehonian spirituality: God’s love, union with Christ, oblation, reparation and social spirituality. The retreat directors were David Schimmel (province director of Dehonian Associates), Fr. Jim Schroeder, SCJ, and Fr. John van den Hengel, SCJ.

“My favorite part of the retreat was the one-on-one sharing sessions because it gave us an opportunity to get to know each other better, especially the new candidates,” said Phong “Paul” Hoang. A novice, Paul will be professing vows on Wednesday.

Fellow novice Henry Nguyen said that “There are many takeaways from this Open Hearts retreat. Two things that quickly come to mind: first, everyone was so welcoming of the Spirit in their sharing and in being in the presence of one another. Second, this provided me with an affirmation of my decision to profess vows with the Priests of the Heart of Jesus.

Click here to view a photo album from the retreat. It is also available on the Province Facebook page.

That was last week…

Last week was the formation retreat, this week the focus on formation continues with three men entering the novitiate on Tuesday and two professing their first vows on Wednesday.

Those entering novitiate are Hubert Senam Kodjovi Liassidji, John Huan Nguyen and Angel Romero. Hubert and Angel have been candidates with the US Province for several years and John is a novice from the Vietnamese District. Henry Nguyen and Phong “Paul” Hoang were also candidates with the US Province before entering novitiate. They began their studies in Chicago; following their first profession of vows on Wednesday they will join the community at Sacred Heart Monastery. Both will attend Sacred Heart Seminary and School of Theology.

Tuesday’s ceremony will be a small gathering at the novitiate house chapel; First Professions will be Sacred Heart Monastery / Sacred Heart Seminary and School of Theology. Both services begin at 4:30 pm. Fr. Quang Nguyen, SCJ, vice-provincial, will be the presider for the first professions, and Fr. Ed Kilianski, SCJ, will receive the vows. Be sure to check our Province Facebook page later this week for photos.

Out of the hospital

Although he joined it a day late, among those who took part in the formation retreat was Fr. Tom Cassidy, SCJ. He had been briefly hospitalized the previous week with an infection. His voice is still a little raspy but he says that he is doing much better and starting to get back to his daily walking routine. Fr. Tom thanks everyone for their prayers and concern.

“Fr. Leo John Dehon [1843-1925] said that the purpose of Christian education was to ‘cultivate a civilization of intelligence and heart,’” wrote Christian Lavergne, Director of the Séminaire du Sacré-Cœur in Pointe-au-Chêne, Québec. “This is a phrase that resonates as a leitmotif in my work.

“I deeply believe that all young people entrusted to us have what it takes to succeed, and that if some fail, it is mainly due to negative factors which don’t activate their ability to succeed and flourish. By negative factors I mean anything that may adversely affect academic success and is not connected to cognitive abilities: poverty, violence, drugs, a dysfunctional family, bullying. Therefore, on the one hand, I must act to limit as much as possible the scope of these factors. For the young, school must be a haven of peace, they should feel loved and respected there.

“On the other hand, I must act to multiply the rate of bringing positive factors into the school. These function as catalysts that activate the intrinsic motivation of students and push them toward development and academic success.

“This articulates our vision at the school.  Every day, this opening of the heart and spirit makes the youth who attend the school witnesses to God’s unconditional love.  What’s more, as director, I also have the immense privilege of witnessing young people thrive and transform society into a more just, more humane, and more fraternal environment.”

The text above is abbreviated from Christian’s full reflection in the most recent issue of Dehonian Spiritulality. Click here to access it (Christian’s text, following the reflection from Fr. Dehon, appears first in French, and then in English). Click here to subscribe to the weekly electronic publication. 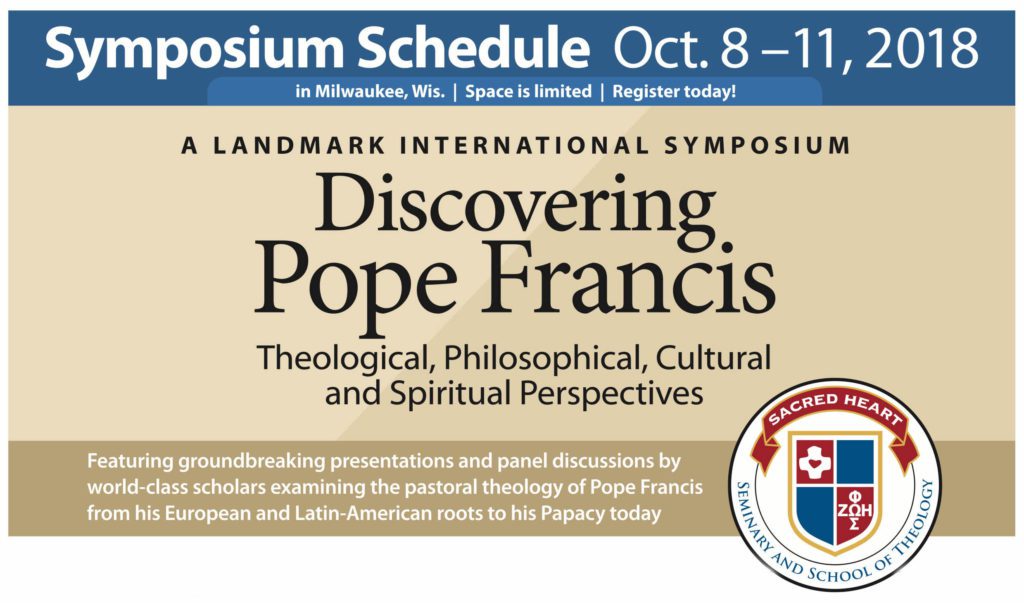 The Pope Francis Symposium is scheduled for October 8-11 at Sacred Heart Seminary and School of Theology. It will feature groundbreaking presentations and panel discussions by world-class scholars examining the pastoral theology of Pope Francis from his European and Latin-American roots to his Papacy today.

Speakers include: Bishop Robert Barron, Auxiliary Bishop of the Archdiocese of Los Angeles and the founder of Word on Fire Catholic Ministries; Massimo Borghesi, professor of moral philosophy at the Department of Philosophy, Social, Human and Educational Sciences at the University of Perugia (Italy) and author of Jorge Mario Bergoglio: Una Biografia a Intellettuale, an authoritative intellectual biography of the pope; Rocco Buttiglione, a member of the Pontifical Academy of Social Sciences, professor of political science at Saint Pius V University in Rome, and author of Risposte amichevoli ai critici di Amoris Laetitia (Friendly Answers to Critics of Amoris Laetitia); Cardinal Blase Cupich, archbishop of Chicago; and Archbishop Christophe Pierre, apostolic nuncio to the United States.

Members of the US Province received an email last week with a special registration link. Those who use the link will have their registration costs covered by the province. Note that the link is only for SCJs; anyone else who uses it will be re-directed to the public registration page.

For more information about the symposium, click here. If you have questions about registration, please contact Kimberly Gardner at kgardner@shsst.edu or call her at 414-529-6967.

Please keep in prayer the mother of Kathleen Dahlgren, province attorney, who died on Friday. Arrangements are pending.

We also remember our founder, Fr. Leo John Dehon. Yesterday, August 12, was the 93rd anniversary of his death. “What a prominent place this city of St. Quentin had in the life of the octogenarian, of the great French citizen, of the excellent priest whom we mourn!” said Bishop Charles Binet in his eulogy for the founder. “He came from La Capelle with a vast accumulation of knowledge seldom found in a young priest. But like all good priests, he did not shut himself up in the ivory tower of his intellectual superiority, but threw himself wholeheartedly into work, especially among laborers.”

Earlier this summer, four students from St. Joseph’s Indian School, and their chaperones, visited Germany as part of an annual exchange program with Gymnasium Leonium in Handrup. Both schools were founded by the Priests of the Sacred Heart and have partnered in an exchange program for more than 10 years.

“I loved it!” said Cameron, one of the students. “It was a really great time. I enjoyed seeing all the different buildings and statues in the cities we visited, especially Berlin, with remnants of the Berlin Wall. I stayed with Bennett; my host family was very hospitable and had lots of good questions.”

In the fall, German students will visit South Dakota and the group will return the hospitality shown to them on their visit to Germany.

“I’m really looking forward to showing Bennett and the others the Black Hills,” said Cameron.

Click here to read about the trip on St. Joseph’s blog site.

Fr. Ed Kilianski has been spending part of each day at the office during his recovery from foot surgery. Tomorrow and Wednesday, he has meetings with the Provincial Council. As noted earlier, he will take part in the celebrations of Entrance to Novitiate and First Professions.

Part of Fr. Ed’s recovery includes preparation for a second surgery.  On August 20 he will have a transmetatarsal amputation to remove the rest of the affected tissue on his foot. Although it is estimated that he will need about six weeks of rehabilitation following the surgery, he hopes to do most of that at St. Joseph’s Community at SHML. He will increasingly return to his duties as able; working from home, and later, part-time at the office.

“Thank you for your support, your understanding, and most of all, your prayers,” wrote Fr. Ed to SCJs last week. “Please continue to keep me in your prayers as I do you each day.”

Two members of the Vietnamese District arrived in Toronto yesterday: They will do their pastoral year of ministry in Canada in preparation for final vows. Frater Vincent Do Van Thoan, SCJ, is 31 (pictured left), and professed his first vows in 2016; Frater John Dinh The Hung, SCJ (right), is 29 and also professed first vows in 2016. Welcome to North America!