Fr. Wojciech Adamczyk arrived at his new assignment at Our Lady of Guadalupe in Houston just in time to celebrate the parish feast day (the feast of OLG is today, December 12). He is pictured here with Br. Andy Gancarczyk, who also serves at the parish. Both SCJs are originally from the Polish Province and previously served together as missionaries in Uruguay. They were a part of an SCJ community living in one of the most challenging –– and poorest –– barrios in Montevideo.

Reflecting on his service in Uruguay Fr. Wojciech wrote that “being in South America deepened my relationship with Jesus. Missionary life is beautiful, but not easy. Our founder, Fr. Leo John Dehon, said that a true disciple of God’s heart can never rest in preaching the Good News. I ask that we all pray for our missionaries.” [Extracted from a reflection written by Fr. Wojciech that appeared on the Polish Province’s website.]

Although new to Houston, Fr. Wojciech has been in the US Province for much of the year studying in the ESL program. His official start date at OLG is January 1, 2017.

Fr. Giovani Pontes, who was serving at St. Thomas More parish in suburban Toronto, returned to Brazil on December 5.

Welcome to the SCJs!

Over the weekend two men were accepted as candidates for the Priests of the Sacred Heart: Thadeus Brooks and Kodjovi “Hubert” Liassidji. Thadeus, 25, is from Milwaukee and will start studies as a junior at St. Xavier University in Chicago. Hubert, 36, is originally from Togo but just last week received his US citizenship. He has a two-year degree in chemistry and is also expected to enter Xavier as a junior.

Both will join the Dehon Formation Community in January.

The Provincial Offices will be closed December 23-26 for Christmas and December 30 through January 2 for New Year’s.

The last Fridge Notes of the year will be published next week, December 19. After a two-week break, the first issue of the year will be sent on January 9, 2017. Prayer requests and other “quick news” will continue to be sent by email to SCJs as usual. Also, check Facebook for news items. Click here to view the US Province Facebook page and click here to go to DehoniansWorldwide (international SCJ Facebook page).

The Dehonian Spirituality e-publication will also take a two-week hiatus. The last issue of 2016 will be sent on December 16. There will be no issues on December 23 or 30. The first issue to be published in 2017 will be on January 6.

In Texas to celebrate his 50th anniversary of priesthood, Fr. Tony Russo took the opportunity to visit his classmate, Fr. Richard MacDonald, in the Rio Grande Valley. It was a time to catch-up with each other, but also to see first-hand the experience of migrants near the US-Mexican border.

“We went to McAllen and visited Sacred Heart Parish which has been receiving the immigrants who are coming mostly from Central America,” wrote Fr. Mac. “They are here legally since they claim political asylum and most of them have family somewhere in the United States. So they are allowed to travel.  We met one going to Virginia, another to Los Angeles, and one to Minneapolis.  We talked to one of the volunteers who was quite helpful and who told us that lately the numbers coming in range from 200 to 400 a day.  Fr. Tony, probably remembering the experience of his immigrant father, whispered in a loud voice:  ‘Mac, this is another Ellis Island.’

“While we were visiting, another 90 migrants arrived and we witnessed the wonderful ministry that is being done.  The migrants got a shower and a meal, a fresh change of clothes, and some sleep. Hopefully their family would get them a bus ticket and they could reunite with them soon. One young man told me that he had been traveling, mostly by foot, for two weeks from El Salvador and was so glad to rest for a while in a safe place.  As Fr. Tony said to me, ‘I can’t believe how much more it means to actually see what is happening.’”

Fr. Mac noted that the former SCJ residence in Raymondville is now used as a shelter for unaccompanied, undocumented minors.

Fr. Ed Kilianski meets with the Provincial Council on December 14, and on December 18 he goes to Pinellas Park, Fl., to lead a retreat for Advent. He returns to Milwaukee on December 23. He will celebrate Christmas with the formation community in Chicago.

The Province Development Office produced a Christmas video. Click here or on the image above to view it.

Who’s that guy in the red?

No, it’s not Santa. Fr. Mark Fortner is in our closing shot again this week. He is pictured here at the SCJ Major Seminary in Jogjakarta, Indonesia. “Counting those who live in another residence in the city, there are 59 studying here,” wrote Fr. Mark. “The rector, Fr. Priyo, SCJ, expects around 18 will be ordained to the priesthood over the next three to four years. There is a lot of enthusiasm about the future of the province here.”

During the past few weeks Fr. Mark has been visiting our communities in Indonesia, where he served as a missionary for 30 years. 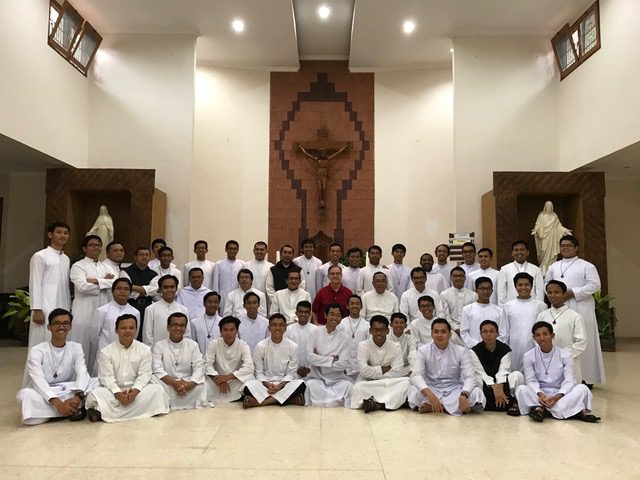