Feast day of an SCJ martyr

Wednesday, September 22, is the feast of Blessed Juan Maria de la Cruz, the first SCJ to be named blessed. He was beatified on March 11, 2001.

“I am a priest.”  Under ordinary circumstances, this declaration would be understood as a mark of dedication and service.  During the Spanish Civil War, however, it was enough evidence for imprisonment and eventual execution.

“They are keeping me here, Reverend Father, imprisoned for three weeks because I uttered a few words of protest about the horrid spectacle of the churches being burned and profaned,” wrote Bl. Juan Maria to the SCJ superior general. “May God be blessed, may his will be done in everything.  I am very happy to be able to suffer something for him who suffered so much for me, a poor sinner.”

On the night of August 23, 1936, after a month in a Valencia jail, where he cared for the pastoral needs of many prisoners, Bl. Juan Maria and nine others were shot to death and buried in a common grave.  In 1940, his body was exhumed and could be identified by his profession cross; his Sacred Heart scapular, which had two bullet holes in it; and a small, bloodstained diary.  Today, his body is buried at the SCJ seminary in Puente la Reina, Spain.

Click here to read more in the September 15, 2015 issue of Dehonian Spirituality. The write-up on Bl. Juan Maria is in the second section, under “Oblation.”

Click here to access the liturgy and prayers for the feast day in a variety of languages.

Getting to know our students

A few facts about our students in formation:

Among the academic degrees that students earned prior to discerning their vocation with the Priests of the Sacred Heart (Dehonians): Construction Engineering, Petroleum Engineering, Business Administration, Biology, and Chemistry.

Previous jobs held by some of our students: insurance sales and marketing, petroleum hydrocarbon (TPH) analyst, inventory control, and as a Disneyland employee where one of our students “peddled souvenirs, danced as a snowman in the ‘Christmas Fantasy Parade,’ piloted the Monorail, and sailed submarines on quest to find Nemo.”

Watch for links to the full autobiographies and photos in next week’s Fridge Notes.

Although it was closed to the public due to the pandemic, the 45th annual Powwow at St. Joseph’s Indian School was livestreamed on Saturday, September 18th. All of the videos can be viewed from the school’s Facebook page. Click here or on the image above to access them.

Among the dresses featured in this year’s Powwow were recent donations of several Jingle and Traditional dresses from Bev Running Bear, a member of the St. Joseph’s Parent Advisory Council.

When Native American Studies teacher LaRayne Woster unpacked the dresses, she noticed tags on each that said “Contemporary Lakota Fashions by Geraldine Sherman.”

“My first thought was, ‘Oh my goodness’,” said LaRayne. “It was a really nice surprise!”

Geraldine Sherman (Cante Waste Win) was born September 8, 1922, and grew up on the Pine Ridge Indian Reservation during the Great Depression. She attended high school and graduated as valedictorian from Oglala Community School in Pine Ridge in 1940. 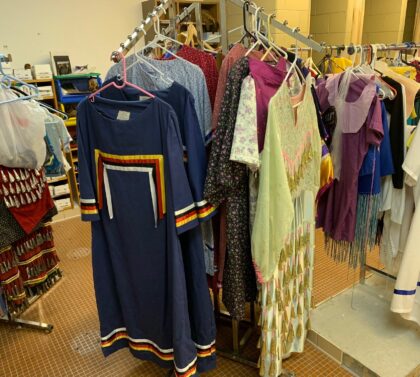 According to her 2012 obituary, Geraldine was encouraged to show her sewing in a 1966 church art show. Although she did not feel she had anything special, she dug out some of her woven pieces for the show and won first place that year and the next. Soon after, she established Contemporary Lakota Fashions by Geraldine Sherman. Before she died in 2012 at the age of 90, she was among the pioneers in Lakota fashion design, and her work earned her awards and accolades across the country.

Many notable people, including tribal officials, Native leaders and celebrities have worn Geraldine’s designs. She created vestments for several local priests, as well as bishops and Pope John Paul II.

Fr. Mark Mastin, SCJ, has moved from Sacred Heart at Monastery Lake to Sacred Heart Monastery. Fr. Mark is in his first year as Associate Director of Formation Programs at SHSST.

Speaking of addresses, we are updating the print version of the North American Personnel Directory. Please click here to submit phone, address, email or other updates / corrections. Thank you!

Register for the Dehon Lecture livestream

“The Sacred Heart and Divine Mercy” is the theme of the September 29 Dehon Lecture at Sacred Heart Seminary and School of Theology. Although attendance is limited to SHSST students and staff, anyone is welcome to view the lecture online. Click here to register.

The lecture will feature two speakers: Robert Stackpole and David Schimmel. David is familiar to many for his work as Director of Dehonian Associates for the US Province. A former SCJ, he served for many years in formation, and in recent years, was involved in retreat work, spiritual direction and adult faith formation. For 12 years he served on the faculty, and then as Co-Director, of the Institute for Spiritual Leadership, a training program for spiritual directors.

Robert Stackpole has a BA in History from Williams College (Massachusetts); an MA in Theology from Oxford University (England), and was an ordained Anglican priest in 1991 before becoming a Roman Catholic in 1994. He later obtained a Doctorate in Theology from the Pontifical University of St. Thomas Aquinas in Rome (the “Angelicum”) in 2000. In 1997 Robert began work as the Research Director, and in 2000, Director, of the John Paul II Institute of Divine Mercy based in Stockbridge, MA. He is also the author and editor of numerous journal articles, web articles and books on the Catholic Faith and the Divine Mercy message and devotion 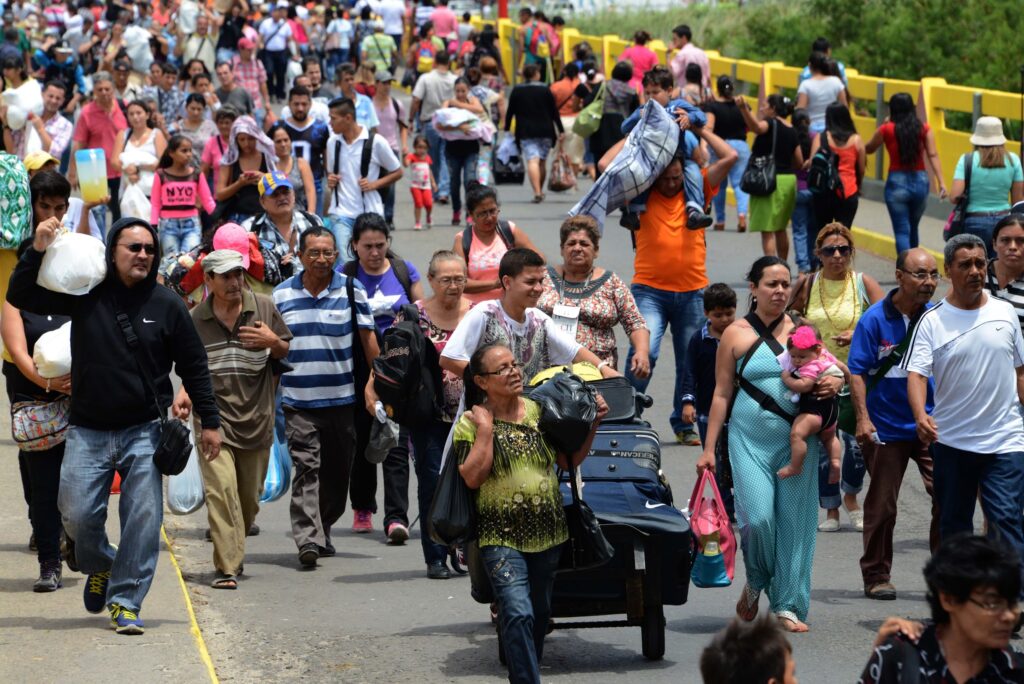 Towards an ever wider “we”

The Catholic Church has been celebrating the World Day of Migrants and Refugees (WDMR) since 1914. It is an occasion to express concern for different vulnerable people on the move; to pray for them as they face many challenges; and to increase awareness about the opportunities that migration offers.

Commemorated on the last Sunday of September, this year’s WDMR is on September 26 (next Sunday). “Towards an ever wider ‘we’” is Pope Francis’ message for this year. Download the message in the following languages.

“We invite you, wherever you are, to join with us to mark this September 26 World Day of Migrants and Refugees,” write members of the North American Migration Committee. “We are pleased to offer to you this prayer service which you can use for your personal/communal reflection.”

Fr. Stephen Huffstetter, SCJ, spent much of last week on a whirlwind visit of the Canadian Region. Vicar General of the congregation, he is pictured below (red shirt) with the Ottawa community. Following his visit to Canada, Fr. Steve spent a few days in Houston. Before returning to Rome on September 28, Fr. Steve will do a few more family visits and take part in the Divine Heart Seminary All-School Reunion. 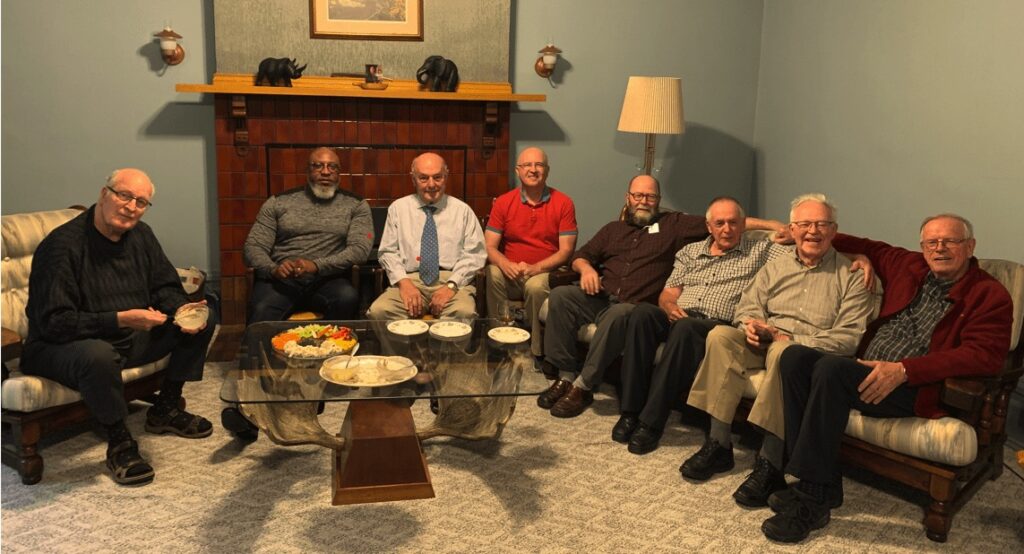